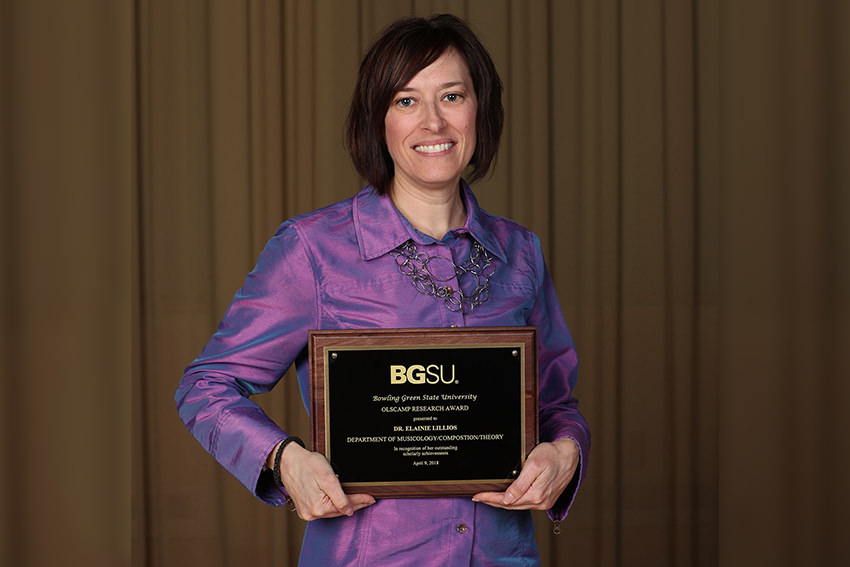 Dr. Elainie Lillios, professor of composition in the College of Musical Arts, has garnered a remarkable number of significant accolades over the past several years. Now Bowling Green State University has added to those the Olscamp Research Award, presented to the composer at the annual Faculty Excellence Awards April 9.

Given annually by the Office of Sponsored Programs and Research to a faculty member for outstanding scholarly or creative accomplishments during the previous three years, the award includes a $2,000 cash prize and a reserved parking spot for a year.

Lillios has been described as “one of the leading composers of her generation in the field of electroacoustic music.” A prolific artist, “the quality of her work has been recognized time and again, both nationally and internationally, through prestigious awards and commissions (including the highly coveted Concours Internationale de Bourges Prize in 2009), an exceptional number of performances, the inclusion of her works on multiple recordings, including several pieces in the peer-selected ‘Music from SEAMUS’ (Society for Electro-Acoustic Music in the U.S.) series, and a 2013-14 Fulbright Fellowship,” wrote nominator Dr. Nora Engebretson, chair of the Department of Musicology/Composition/Theory.

In just the last three years, Lillios has had five national premieres and an international premiere of newly composed works for various groups, 121 repeat performances of her works, and five pieces published on five different CD labels, including one international release. She has also made numerous invited appearances as a guest composer and composer in residence that have involved giving lectures, concerts and master classes. And during this time, in 2016-17, she also served as interim associate dean of the College of Musical Arts, Engebretson noted.

Lillios also reached four major career milestones during the last three years. In 2016, she was awarded two of the most selective and highly regarded national awards in her field: the Barlow Endowment Commission from Brigham Young University and the Fromm Foundation Commission from Harvard University (which she ultimately had to decline because of a conflict with the Barlow). In 2017, she was a finalist for the Rome Prize, one of the most competitive international awards, and in 2018 was nominated for a Grammy Award for Best Contemporary Composer for her flute trio “Summer Sketches.”

“She is an exceptionally talented composer and an absolute master of sound design and audio production,” said Dr. Russell F. Pinkston, professor of composition and director of the Electronic Music Studios for the Sarah and Ernest Butler School of Music at the University of Texas at Austin.

It is perhaps not surprising that the seminal journal in the field, MIT Press’s Computer Music Journal, lauded her as “one of the contemporary masters of the medium.”

“In addition to her multiple achievements and her strong record of productivity as a composer, Elainie has distinguished herself in her contribution to the musical culture in Greece, as a Fulbright Fellow. She is highly regarded as a teacher, and also contributes through her research,” said Dr. Judith Shatin, the William R. Kenan Jr. Professor in the McIntire Department of Music at the University of Virginia.

Lillios “actively recruits and mentors composition students at BGSU as well as teaching in the Summer Institute for the Performance, Listening, Interpretation and Composition of Electroacoustic Music in Kalamazoo, Michigan,” Engebretson said. “Her students, who are incredibly devoted to her, have gone on to top doctoral programs and many are now active professionals.”

Pinkston also said, “I have had two of her former students who served as my teaching assistants in the University of Texas Electronic Music Studios while completing their doctorates. Both were extremely well-trained and both practically idolized their former mentor. She obviously is a very gifted teacher, in addition to her many other talents.”

Through her national and international connections, Lillios has helped bring other contemporary performers to BGSU to learn from and with faculty and students here. These include the Bent Frequency Duo, for whom she composed “Hazy Moonlight” for her Barlow Commission, and accordionist Panagiotis Andreoglou, whom she met during her 2014 Fulbright stay in Thessaloniki, Greece, and who then came to BGSU as a 2017 Fulbright Fellow.

What is it about Lillios’s work that has made it so popular?

“There are many factors in the creative work Elainie produces that I believe have pointed her toward field-leading success,” said nominator Dr. Jeffrey Hess of the Jacobs School of Music at Indiana University. “First and foremost, she has a high level of musicality that transcends the genres she most frequently chooses to work in. I believe her music speaks to a broad audience, not just those of us who haven’t yet moved out of our parents’ basement.

“Coupled with that, as exemplified in many works, but in my mind particularly in ‘Veiled Resonance,’ is the exploration of new methods of expression, including extended instrumental and formal techniques that create a partnership between composer and performer. She carefully researches the instruments she writes for and often extends known techniques through her own innovations. Her sensitivity to sound design is unparalleled, in my honest opinion. She is extremely careful in how she shapes her sonic world, utilizing advanced technologies — the music is technically flawless, musically fascinating, but above all, highly personal and unique. In this regard in particular, I believe many of us in the field would say that she has fulfilled the ambitions of many of its founders, which is to use technology in such a skilled and innovative way, the music is indistinguishable in its level of expression from centuries-old instrumental music.”