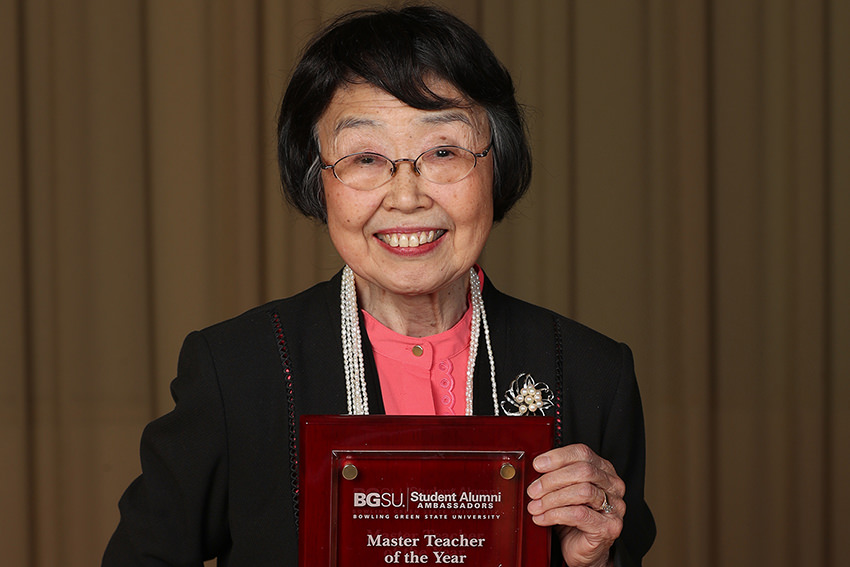 For Akiko Kawano Jones, director of the Asian Studies Program, teaching Japanese involves far more than helping students learn a language. For her, it means introducing them to an entire culture and immersing them in it as much as possible.

For her tireless devotion to her students and her extraordinary ability as an instructor, the Student Alumni Ambassadors named Jones the 2018 Master Teacher. The award includes a $1,000 cash prize.

Jones takes teaching extremely seriously and applies herself to creating the best learning experiences both in and out of the classroom.

“I believe that teaching is a process that results in learning and experiences that are transformative,” she said. “It changes the student’s life as the student becomes more informed, more sensitive, more open-minded, and more rationally critical. In short, the student becomes a better citizen. Good teaching results in student learning. Teaching changes lives, and failing to teach does harm.”

Although her expectations are high and her classes rigorous, the joy in learning and sharing of culture that she communicates to her students and that they return to her have earned Jones deep respect and affection. She reaches each student in the belief that teachers should “provide instruction that is adaptable to students’ needs and levels of achievement, and thus provides all students at all levels with their best opportunities to achieve.”

Class members follow the Japanese customs of greeting and bowing in class. Her students are required to participate in Japanese cultural events each semester to apply and extend their learning, and Jones makes sure there are ample and varied opportunities to do that. She spends a great deal of energy developing relationships with local Japanese families, organizations, businesses and the Consul General’s office to develop authentic cultural experiences and opportunities for her students. These relationships have yielded opportunities for Japanese language students to practice their Japanese language skills and to learn more about Japanese culture. She involves them in community activities such as Japanese calligraphy, art exhibitions, traditional tea ceremony demonstrations, Asia Day and the annual Cherry Blossom Festival, which also has the support of alumni. She brings prominent speakers to campus, recently including Nobel Prize-winner Setsuko Thurlow for the BGSU Peace Symposium.

Jones has also expanded the Asian Studies Program, now a part of the World Languages and Cultures department, to include Korean language and culture, and in 2014 founded the Korean Club. She also helps make arrangements for students wishing to study in South Korea and China.

A year after coming to teach at BGSU in 1983, she founded the Japanese Club, which meets from 9-11 p.m. on Thursdays in the Nakamoto Japanese Studies Room. The club is open to everyone who is interested in all things Japanese. About 40 to 80 students consistently participate in the topical meetings.

“Along with the Japanese language students and the students from Japan, those who are not in classes and who are from other countries are also active participants in the Japanese Club. The meetings give opportunities for Japanese and non-Japanese students to have discussions and to exchange cultures,” Jones said.

She has always been the adviser for the club, gathering with the officers every week to plan the meetings. She is a firm believer in empowering students to be active participants in organizing and running events so that they get hands-on experience.

Twice a year the club members come to her home for a “Half Day Homestay” to practice informal conversation, Japanese cooking, and Japanese etiquette of visiting a Japanese home.

Also since 1984, she has been teaching the traditional Japanese tea ceremony, and, with the donation of the Nakamoto Tea Ceremony Room to BGSU in 1992, has demonstrated and taught the ceremony to students and community members.

“To encourage students to sample the culture of Japan through tea, I have developed a one-credit workshop on Japanese Tea Ceremony and the Japanese Culture for a summer workshop,” Jones said. “I have been rewarded by the students’ enthusiastic participation. The students learn not only the philosophy of the tea ceremony, but also about the Japanese way of thinking and customs while learning to perform the ceremony and to be guests.”

Since the summer of 2002, she has been taking 8-13 BGSU students to Japan every summer for an intensive program in Japanese language and culture, traveling to many of the major cultural sites in Japan.

In 2014, she established the Akiko Kawano Jones Study Abroad Scholarship to enable more students to study in Japan.

Beginning in 2006, she developed the summer Hiroshima experience for BGSU’s Peace Studies Program. During their 10-day stay, the students learn about the horror of a nuclear attack and study pathways toward achieving world peace through participation in the memorial service for atomic bomb victims and in lectures, including the testimony of a survivor.

Jones also helps current students and graduates to gain work experience, including internships, exchange and education-abroad programs, and jobs in Japan, and serves as a mentor to them. She also works closely with JET program at the Consulate General’s Office in Detroit, which helps students who want to travel to Japan to teach English. She has also sent her BGSU students to local elementary schools to help tutor Japanese students in English.

Even students who are not majoring in Japanese or Asian studies have benefited from her guidance and experience, such as glass art alumnus Adam Goldberg, who, while a student, went to Japan to study traditional glass techniques. “I could e-mail her with questions and she gave me so much good information and advice,” he later said gratefully.

Her teaching has also been recognized several times by external groups. In 2013, she received the “Teacher of the Year Award” in the post-secondary category from the American Association of Teachers of Japanese. Jones was chosen to receive the award for her “quality and innovative teaching, service to the profession and to the community, participation in professional development activities, and advocacy for your program and Japanese language education as a whole,” according to the association’s co-presidents, Jessica Haxhi and Yasu-Hiko Tohsaku.