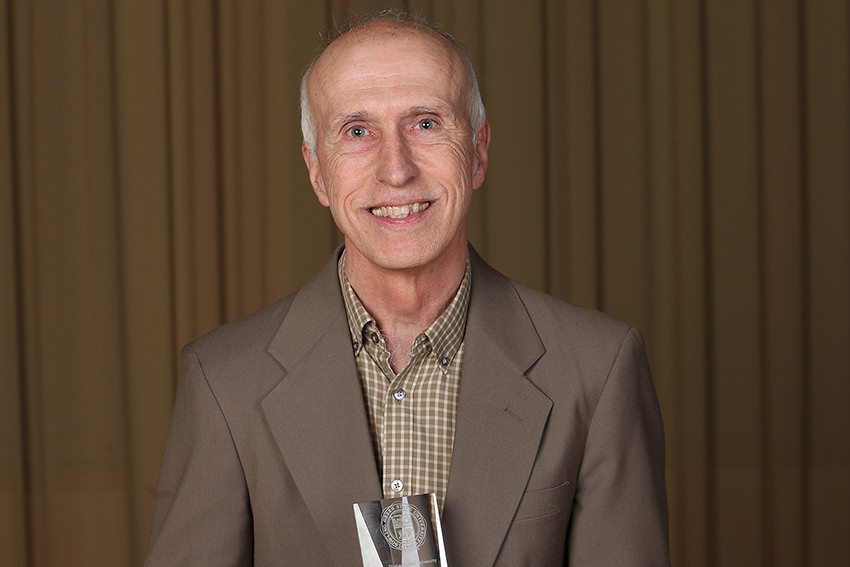 In recognition of a lifetime of contributions to his discipline and to Bowling Green State University, the BGSU Board of Trustees at its Feb. 23 meeting conferred the title of Distinguished University Professor on Dr. James Albert. He was also honored at the 2018 Faculty Excellence Awards on April 9.

The Distinguished University Professor title is given to “faculty whose creative professional achievements are such to have won them national distinction or recognition for their enduring impact in their broader discipline of interest that goes well beyond their primary discipline area.”

A professor of mathematics and statistics and an internationally known expert on Bayesian statistics, which deals with incorporating new evidence to determine probability, Albert has combined his passion for both statistics and baseball by creating a new field that studies the statistics of sports. This has heightened interest and increased quantitative literacy through his application of statistics to baseball, his nominators all noted.

“Dr. Albert’s work with sports data is probably the most prominent work in that area of application of anyone’s in the world,” said Dr. James Gentle, University Professor of Computation Statistics at George Mason University. “His accomplishments and expertise have certainly earned him an international reputation in statistics.”

A highly productive scholar, he has nearly 7,000 citations of his work and “his productivity only continues to grow, with over one-third occurring in the last six years,” his nominators said. “His numerous publications (14 books and 104 journal articles) appear in the most prestigious venues.”

A reviewer of his work said, “Some of these papers are seminal works in the very best statistics journals,” and his papers on Bayesian regression are highly cited and influential.

Gentle also said Albert’s work was unusual in that it had real impact in the sciences beyond statistics in that, 30 years ago, Bayesian methods were rarely applied in statistical analyses, but that Albert’s contributions, including his theoretical and methodological research, his teaching, the software he developed and other services he has rendered to the scientific community have advanced the applications of statistics and helped make Bayesian methods viable alternatives to traditional statistical methods.

A celebrity in the world of sports quantitative analysts, Albert has also produced popular books that have enabled users to learn how to use R, a software for statistical computing. “This is the Holy Grail for anyone who wants to learn R and how it related to baseball,” wrote one reviewer. He also maintains an active blog that reflects his skill, expertise and enthusiasm for the topic.

Along with Albert’s strength in research, he has also demonstrated a strong commitment to teaching and service, the selection committee said.

At BGSU he has worked with Dr. Maria Rizzo to develop a new undergraduate major in data science with a technology-enhanced curriculum. Their work has been supported by $800,000 in grants from the National Science Foundation and the state of Ohio, and includes undergraduate courses such as Computing with Data, Statistical Programming and others. At the graduate level, he has developed such courses as Bayesian Statistical Inference and Hierarchical Models. He is the undergraduate coordinator in his department. Four of his books are written for undergraduates, and are directed at specific knowledge sets they will need to excel in the field, said Dr. Raymond Craig, dean of the College of Arts and Sciences.

Albert is committed to improving the pedagogy of statistics at every level, said Dr. Ronald Wasserstein, executive director of the American Statistical Association (ASA), the nation's preeminent professional statistical society. He has long served as associate editor of the Journal of Statistics Education and has provided leadership through workshops, publications and by example to help students at the high school and college level better understand and communicate statistics.

For his contributions to the field, Albert has been honored by his professional colleagues. In 2015, he received the ASA’s prestigious Founders Award. He was named a Fellow of the association in 2000.

The Founders Award is the association’s highest recognition for distinguished service and leadership within the association and the statistical science profession.

To be eligible for the honor, ASA members must have served the association and its membership over an extended period and in a variety of volunteer leadership roles.

Albert was honored “for outstanding leadership and efforts in statistical education and relationship building between academia and industry; for service as editor of The American Statistician and the Journal of Quantitative Analysis of Sports and as a member of the Significance editorial board; for major contributions as associate editor of several ASA journals; for chairing and participating in numerous ASA committees and councils devoted to statistics education, Bayesian statistics and two sports statistics; and for heightening interest in statistics through the use of sports examples and applications presented in papers, technical reports, lectures, blogs and books.”

He joined the faculty at BGSU in 1979 after receiving his Ph.D. in statistics from Purdue University. In 1994-95 he was a visiting professor at Duke University’s Institute of Statistics and Decision Sciences.