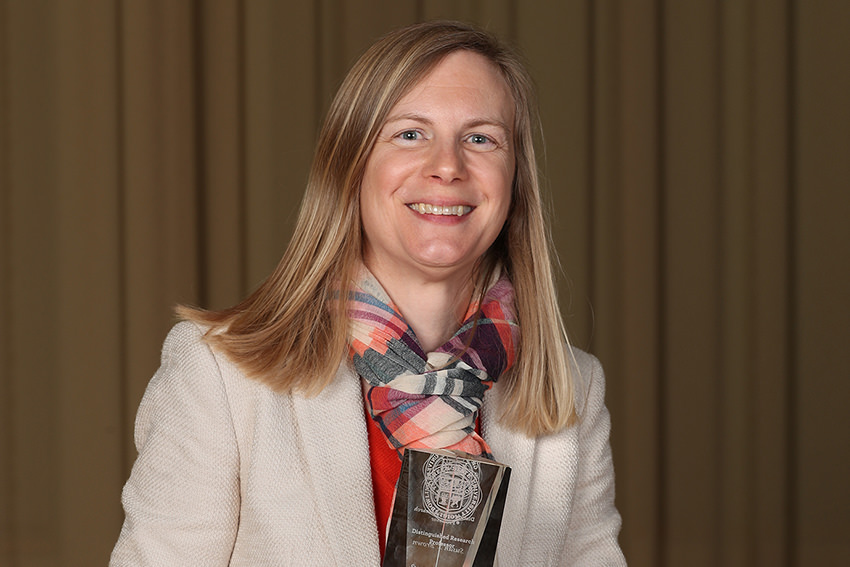 BGSU sociologist Dr. Susan Brown has given Americans a new look at changing family dynamics and family relationships, notably among older adults and including same-sex cohabiting couples. Recognized as one of the top and most visible family sociologists and demographers in the country, Brown has helped create a new subfield of sociology.

A professor and chair of the sociology department, Brown can now also add the title Distinguished Research Professor to her name, an honor conferred upon her by the BGSU Board of Trustees at its Feb. 23 meeting in recognition of her outstanding scholarship. She was recognized a second time at the Faculty Excellence Awards on April 9.

She is also the co-founder, with Dr. Wendy Manning, Distinguished Research Professor of sociology, of the National Center for Family and Marriage Research (NCFMR) at BGSU, and a current holder of the 2015-18 Professorship of Research Excellence, which recognizes outstanding achievement.

Brown has “carved out a new area in her research on family and relationship dynamics in later life (gray divorce, cohabitation, living apart together and repartnering among older adults),” wrote Manning and Dr. Peggy Giordano, Distinguished Research Professor Emeritus, in their letter of support. “The studies she has conducted break new ground as they establish connections across the fields of sociology, family demography and gerontology.”

A prolific scholar, Brown’s award-winning research has been published in the top journals with nearly 50, peer-reviewed articles. She is widely cited; according to Google Scholar, articles by her have been cited nearly 5,500 times, some more than 200 times. Three are considered “classics” and have been cited more than 500 times.

“This is an impressive record for any sociologist, and especially for someone who earned her degree less than 20 years ago,” said Manning and Giordano.

She also has communicated her research findings to broad audiences, which “has resulted in national recognition for BGSU in print, television, radio and social media,” said Dr. Pamela Smock, a frequent collaborator and professor in the Department of Sociology at the University of Michigan and Research Professor in the Population Studies Center at Michigan’s Institute for Social Research.

She holds several prominent professional positions, serving on scientific review panels and editorial boards, as chair of the Population Sciences Subcommittee study section of the National Institutes of Health (NIH), as a board member for the Population Association of America and on the council of the American Sociology Association Family Section.

In addition to bringing attention to changing trends among older adults and family complexities, she also spotlighted another little-studied phase of life, early adulthood, as co-editor of “Early Adulthood in a Family Context,” published by Springer. The book was the outgrowth of a national conference she organized that united family and human development scholars.

She is also the sole author of the recent book “Families in America,” published in 2017 by the University of California Press.

Her record of scholarship has attracted significant external grant funding, which then supports additional research, said Dr. Raymond Craig, dean of the College of Arts and Sciences. Her own research has been awarded more than $1 million, and the NCFMR has received $4.35 million. Her research has been fully supported by the NIH, the National Institute of Aging, the Annie E. Casey Foundation and the Eunice Kennedy Shriver National Institute of Child and Human Development. In her role as co-founder of the NCFMR, she has been awarded funding by the U.S. Department of Health and Human Services.

She has mentored numerous undergraduate and graduate students, many of whom have also won awards for their work and have gone on to promising careers in academia.

Due to Brown and her colleagues’ research productivity, “BGSU’s sociology department is now seen . . . as a formidable national competitor for funding and especially for family demographic research,” Smock wrote, and “her work on marriage, living arrangements and divorce among older Americans has received enormous attention and established a new sub-field in which she is the major figure,” wrote nominator Dr. Andrew Cherlin of Johns Hopkins University.

Summing up, “It is the ability to collaborate, coordinate and direct research with a national impact that is most impressive,” Craig said. “Brown ‘raises all boats.’ She is also a great colleague and administrator and brings a level of humanity along with her high expectations of others.”