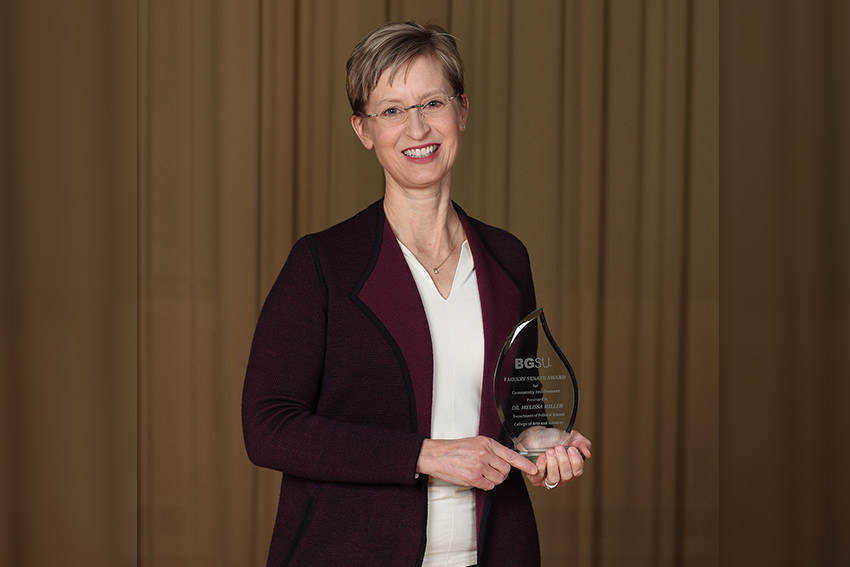 Dr. Melissa Miller, a professor of political science and the 2016 Bowling Green State University Master Teacher, was honored by Faculty Senate with its 2018 Community Involvement Award. The award recognizes a faculty member for outstanding contributions to the community, as well as the importance of faculty service and the contribution of community involvement to the education and image of Bowling Green State University. It includes a $1,000 cash award.

“Dr. Miller is committed to community involvement,” said nominator Dr. Shannon Orr, professor of political science. “Between the last two presidential elections she represented BGSU during more than 120 media interviews in print, radio and television for outlets around the world including the BBC, Radio New Zealand, CNN and The New York Times. Through these interviews, she has represented and promoted Bowling Green State University around the world.”

Miller’s colleague Dr. David Jackson, professor, noted that the time it takes to research and prepare for these interviews is extraordinary.

Her community involvement also includes numerous invited public talks across the region on a variety of topics related to elections. She and a group of her students are conducting a research project on the 2018 Ohio governor’s race, which she recently shared on a local television news show, and has also built community-based learning into her graduate research methods class, working with the Toledo Metroparks and Wood County District Public Library on projects related to their levy campaigns.

Miller is a strong believer in the role of the public university as a force for community education, and has continually proven herself dedicated to sharing her extensive knowledge about politics and state and national issues.

“Her commitment to education goes beyond the classroom, and she is willing to take the time to share her expertise with reporters in order to shed light on current events,” said David Kielmeyer, chief marketing and communications officer. “She is always well-prepared, grounded in research and able to speak in a clear and direct manner that listeners and viewers can understand, whether it’s on the local nightly news or a national outlet such as National Public Radio.

“The Office of Marketing and Communications gets frequent requests from the media for expert commenters, often with very little notice, and Dr. Miller has become one of our ‘go-to’ experts. Despite her heavy load of teaching and research, along with family demands, she makes herself available whenever possible, even at times allowing reporters to come to her home for an interview.”

She is so well respected by the media that they often ask for her by name, and she has been a frequent guest on Sunday morning news shows such as ‘Conklin and Co,’ Kielmeyer said.

Brian Trauring, news director for 13ABC in Toledo where Miller often serves as a guest, wrote in support of her award nomination that Miller has become a nationally recognized expert in analysis of political developments.

“She is always astute and relates well to our viewers,” he said. “In short, Dr. Miller serves the public well and provides greater understanding of American and Ohio political decision-making.”

Her involvement in public education goes back many years. In 2008 when Ohio figured prominently in the presidential election, BGSU was chosen by ABC News’ “World News with Charles Gibson” as a site for Gibson’s “Great American Battleground Bus Tour.”

“Dr. Miller allowed Gibson and his crew to visit and film her first-year student political science class discussing the candidates’ positions on critical issues facing the nation. She then led another group of students in watching the second presidential debate and afterwards discussing what they had heard and sharing their responses, which was also broadcast nationally,” Kielmeyer said.

“This entailed a huge amount of work and time on her part but, as I was to learn, Dr. Miller is always willing to provide special learning experiences for her students even as she takes opportunities to inform the public on important issues. In so many ways, she is helping to create a more engaged and informed citizenry.”

“In 2016,” Jackson said, “Miller organized and orchestrated a nine-episode ‘Battleground Ohio’ podcast in which she participated as a panelist six times. I know that she did a tremendous amount of planning and research, which made them very valuable for their large listening audience.”

She is also preparing the next generation of political science communicators, Jackson said. “Dr. Miller works with her students to produce political-science research in a very hands-on way, and teaches them how to share that information effectively with a general audience. That is the very definition of a high-impact learning practice.”