Songbirds may tune in to mental health treatment 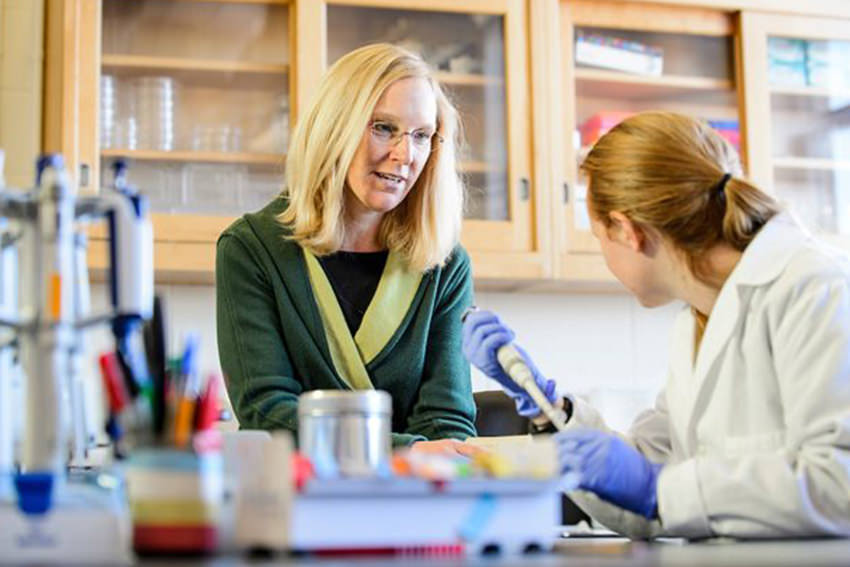 Lauren Riters (left) at work in her lab.
Tweet

Dr. Lauren Riters returns to Bowling Green State University Feb. 21 to share her research on how the social interaction of songbirds is relevant to human mental health, and to give a nod to the late Dr. Jaak Panksepp, Distinguished Research Professor Emeritus of psychology, one of her BGSU mentors.

Riters, who earned master’s and doctoral degrees in psychology from BGSU in 1993 and 1997, respectively, will present the 2018 J. P. Scott Center Panksepp Lecture in Neuroscience. She is a professor in the Department of Integrative Biology and the Neuroscience Training Program at the University of Wisconsin. Her talk, which starts at 6:30 p.m. in the Bowen-Thompson Student Union Theater (Room 206), focuses on “Insights from Songbirds into the Neural Regulation of Positive, Rewarding Social Interactions and Relevance to Human Mental Health.”

According to Riters, the work of neuroscientist Panksepp, who died last April, made it possible for her to pursue her current research path. He was known for helping to reveal the emotional lives of animals by tickling rats and listening to their laughter. His research opened new possibilities for the treatment of depression and other forms of mental illness.

Riter’s research connects the vocal communication of songbirds to successful social interactions across vertebrates, which provides a potential key to mental health in humans. Highlighting discoveries made using the unique communication properties of songbirds reveals how the brain motivates, rewards and adjusts communication to make it appropriate within specific social contexts.

“These discoveries provide knowledge that is crucial to develop treatments that can restore the positive, affiliative social interactions that are devastated by mental illness in humans,” she said.

Her initial “bird” research at BGSU with her faculty adviser Dr. Verner Bingman, Distinguished Research Professor of psychology, focused on homing pigeon navigation. During post-doctoral work in Belgium, Riters studied European starlings and how their brains controlled songs when they were trying to attract a mate. She discovered that birds sing in contexts other than solely targeted to reproduction. She also continued birdsong research in post-doctoral research at Johns Hopkins University.

The focus of her research is on brain systems’ motivations and rewards.

“When we looked at the context in which birds were singing, it wasn’t necessarily about reproduction,” Riters said. Songbirds produce high rates of song within multiple social contexts, suggesting they are highly motivated to sing and that the act of singing itself is rewarding. They also appear to adjust song so that it is appropriate within a given social context, she said.

Birds and mammals have similar areas in the brain that regulate and reward social behaviors, which is where the connection between rewarding communication of songbirds and mental health treatments lie.

“When we look at humans with mental health disorders, there is disrupted communication in social groups; those situations lose their reward value.”