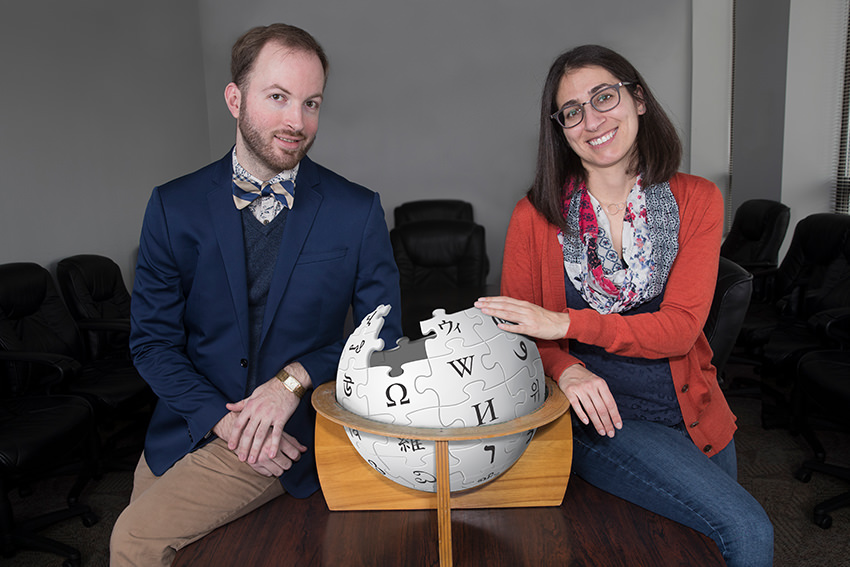 Although loved by the general public as an instant source of information on almost any topic, Wikipedia has been held in low regard by many academics because, as an open source encyclopedia, the reliability of that information can be suspect. Some faculty, such as Dr. Niki Kalaf-Hughes, a Bowling Green State University assistant professor of political science, do not allow their students to cite Wikipedia as a source.

Aware of this reputation, Wikipedia has initiated an interdisciplinary pilot program through its Wiki Education arm to get more academics involved as subject-matter experts to help ensure that its entries are accurate and bring more rigor and diversity to the resource. The pilot is beginning with nine people from the fields of political science, sociology and women’s studies.

Remarkably, of the three chosen in political science, two are from BGSU. Kalaf-Hughes and lecturer Dr. R.G. Cravens are participating in the Wikipedia Fellows pilot. And, as they learned when the fellows from across the country held their first online “meet and greet,” they are not the only participants with a BGSU connection. Dr. Jenn Brandt, director of the Women’s and Gender Studies Program and an assistant professor of English at High Point University, is an alumna.

The program is organized such that the fellows are working independently through a structured series of Wiki Education training modules that teach how Wikipedia works, how to conduct the editing and posting processes for articles, Wikipedia’s guidelines and rules, and other important information. Wiki Education staff monitor their progress and are available for help. The fellows, who range from Alaska to Texas, meet regularly online to discuss their progress and exchange ideas.

“We’re beginning with the editing process, using articles that are already up, and will eventually progress to contributing articles ourselves,” said Cravens, who joined the BGSU faculty in August 2017. “We’ll find them based on our experience and expertise.”

He and Kalaf-Hughes said it’s been interesting to learn how the system works, including how to use the “Talk Pages” that all registered account holders have access to and in which they are encouraged to post any proposed edits to articles in advance.

“You’re telling people who are interested in the subject so that it doesn’t catch people by surprise and the community has a chance to react,” Cravens said. “I was also relieved to learn you can’t ‘break’ Wikipedia,” he said humorously. “Every change is logged, and you can always revert to the previous page. This gives us more confidence in making our changes.”

Although he has an article coming out this spring on religion in LGBT politics, he will not be posting it on Wikipedia. As the fellows learned, it is not allowed to post or cite one’s own work.

By the end of the pilot in April, the goal is for the fellows to have made substantial edits to at least two articles.

Cravens and Kalaf-Hughes had different motivations for applying to participate, as they discovered in the first online group meeting. Cravens’ research area is LGBT issues in politics, state and local policies and nondiscrimination laws, an area in which there has been relatively little research available or textbooks to which readers can refer.

“In my experience with Wikipedia, what there has been online hasn’t been completely accurate,” he said. “This is an opportunity to provide better information for those who do research and a really great opportunity for the field of LGBT politics to increase the amount of information available.”

For Kalaf-Hughes, on the other hand, whose research area is American political institutions and race and ethnic politics, “My goal was to see how I could use it, if at all. We don’t have the World Book Encyclopedia anymore, so I use it to look up all sorts of random information. It’s very handy to look up things in my field such as where members of Congress went when they left office, for instance, but I consciously fight against it. I do not let my students use it as a reference at all.”

The self-professed “devil’s advocate” in the group, she said she was “really intrigued and curious” to see if Wikipedia could accomplish its goals of engaging academics to “evaluate the reliability of sources, organize complex concepts, or identify aspects of a subject that are missing, underrepresented, or overemphasized,” as the pilot program introduction states.

She also sees the encyclopedia’s value for new and emerging fields of study such as Cravens’.

“In my field there’s a lot, but I see the potential for areas that are not as developed,” she said.

Cravens is hopeful. “We’re encouraged to take an impartial, scientific perspective on the literature on a particular subject area and to be transparent so as to build up the site’s integrity. It’s really evolving, and new topics that need to be explored are being included and giving a broader perspective.”