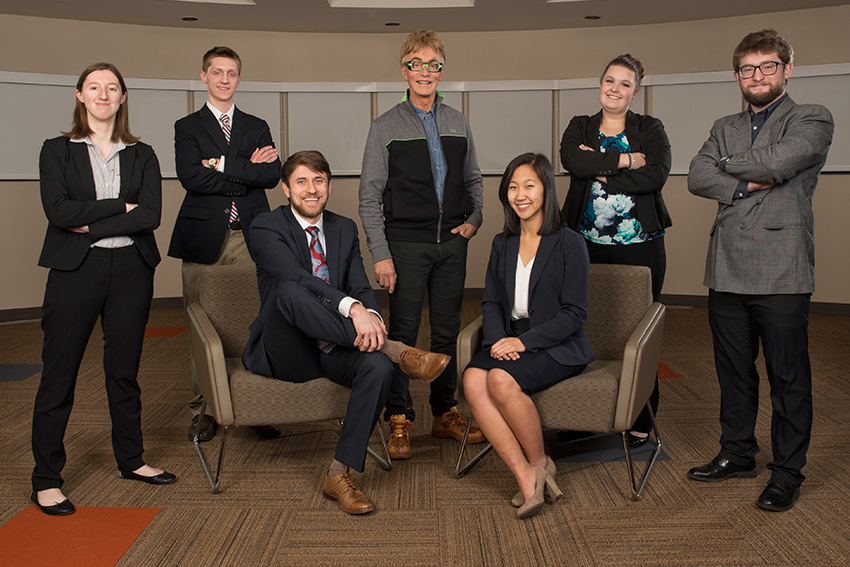 Building upon a track record of success over 12 years of mock trial competition, Bowling Green State University has become widely recognized for fielding the premier mediation team in the country in just three years.

Dr. Neil Browne, Distinguished Teaching Professor of Economics Emeritus, who holds both J.D. and Ph.D. degrees, has served as faculty advisor and coach with both BGSU teams and points to how the two competitions could not be more different in tone and the skill sets they are designed to sharpen. Yet, success in mock trial has laid a solid foundation for high performance in the gentler yet equally strategic arena of alternative dispute resolution.

“I believe one of the advantages we have is the mock trial background,” said Browne. “That certainly seems paradoxical, yet it makes sense when you look at the kind of preparation it took to do well against more than 650 intercollegiate mock trial teams.”

It started with one of the things BGSU does best as a public mid-major university — overcoming the odds in competition against schools like Miami that have a million-dollar mock trial endowment or a UCLA team that advertises for students with acting experience in television and movies.

“We had no business going into mock trial competition against Virginia or Yale or any of these places,” recalled Browne. “When you think about competing against them, you either have to settle for the idea that you’re going to get pummeled on a regular basis or you have to be clever and work longer hours, because they are very skilled and well-funded.”

BGSU did well in mock trial between 2003 and 2015, consistently placing among the top twenty teams and finishing as high as seventh. Browne likened the tenor to Division 1 intercollegiate football, with plenty of interest among university leaders and engaged donors as high-profile reputations were placed on the line.

While BGSU celebrated this success, mock trial’s long competitive season and intense, unforgiving atmosphere began to take its toll on team members and Browne himself. In addition, the skill sets were very specific to the aggressive advocacy called for in trial proceedings, and they did not always translate well to a broader array of relationships and interactions outside the courtroom.

According to Browne, he “stumbled across” a great alternative to mock trial — intercollegiate mediation tournaments held by the International Academy of Dispute Resolution (INADR) over a 10-week period each fall. He began to read up on alternative dispute resolution and quickly realized that there were a great many advantages that could enhance the lives of team members within a more relational framework. Some of the key benefits of mediation over litigation include:

Intercollegiate mediation reflects real world practice, involving a mediator and the two conflicting parties and their advocates. The atmosphere is casual and the discussion is conversational in tone. The mediator is trained to listen very carefully to the statements of each advocate and client while trying to figure out how to get them to come together. By the end of the mediation process, the goal is to get each participant to see the perspective of the person they were previously fighting with.

According to senior accounting major Phil Rich, who served as the president of this year’s team, intercollegiate mediation has been an important part of his overall BGSU and Honors College experience:

"The BGSU Mediation Team has allowed me to compete and succeed at a national level while building important skills that make me a better student and a better human being,” said Rich. “I have developed listening skills, speaking skills and emotional intelligence, which are incredibly important, but are not traditionally discussed in a classroom setting.”

Disproportionate success at a national level

Professional mediators are brought in as judges and given specific criteria to score teams in two categories: Mediator and Advocate-Client. Each team is comprised of three members and most schools send two or three teams to compete in the tournaments that lead up to the national championship. In addition to team results, the INADR names 35 All-American Intercollegiate Mediators each year.

BGSU has competed in intercollegiate mediation for three years and has established an impressive record of success, beginning with recognition as the top new team in 2015. Two team members received All-American honors that first year, then the program rapidly advanced with seven All-American Mediators named in 2016. Last fall, BGSU fielded three teams, one of which finished first in the nation in the Advocate-Client category. Another finished fifth in the Mediator category.

Browne sees a bright future for the team and for individual team members who have learned new skills that will serve them well in their careers and lives:

“The thing that is so valuable to me in mediation is seeing so much personal growth among our students,” said Browne. “It’s very much about standing up and representing yourself well. It’s having the confidence to articulate your own interests and thoughtfully defending them, but at the same time recognizing the interests of others and respecting those too.”