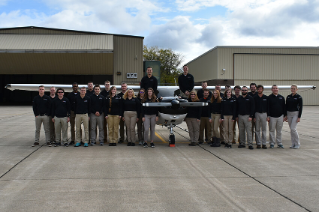 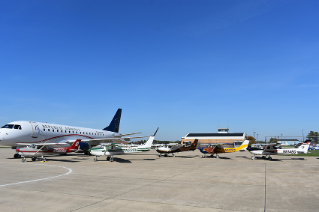 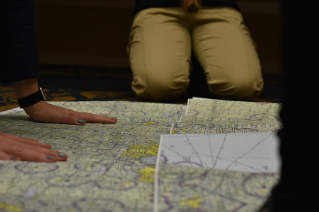 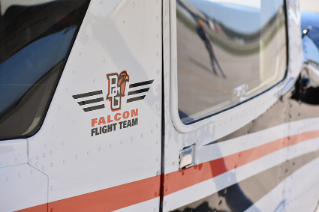 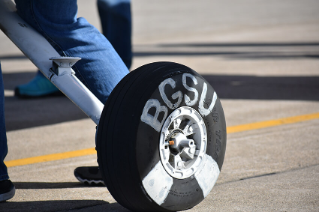 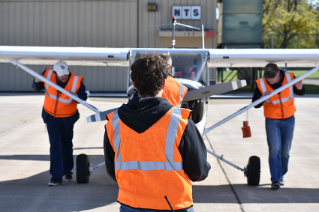 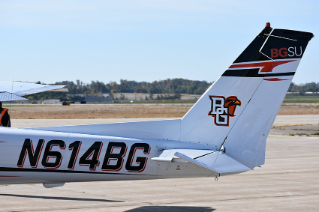 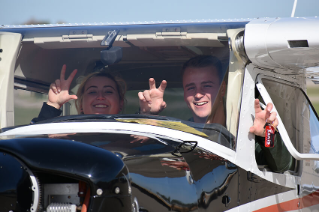 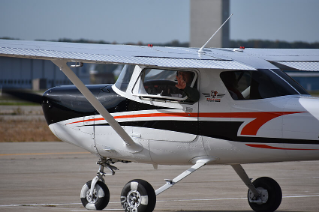 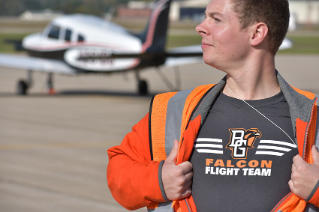 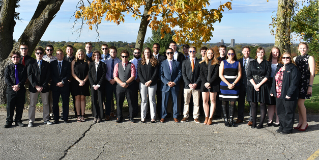 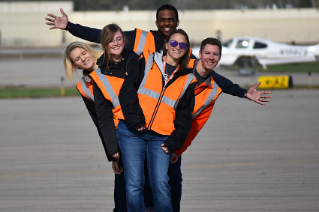 Tweet
Amber Stark ’99
Flying a plane isn’t an easy thing to do on a normal day, but imagine attempting to land it precisely on a line chalked across the runway. Or the precision required to drop a message canister out of an aircraft window so that it lands as close as possible to a specified ground target.
Bowling Green State University students on the Flight Team are doing just that - and doing it well. The team earned the Safety Award and made it into the top 10 in five out of nine events – with eight top-10 finishers – at this fall’s National Intercollegiate Flying Association (NIFA) Safety and Flight Evaluation Conference (SAFECON) Region III competition at Western Michigan University.
The team placed fifth and 10th in Aircraft Preflight Inspection, seventh in Power-Off Precision Landing, eighth in Short Field Landing, second and ninth in Message Drop and ninth and 10th in Ground Trainer.
"It’s a beautiful example of the synergy between the flight lab, classroom theory and hands-on experience. The students really value the opportunity.”
“Everyone on the team contributed to bringing home the Safety Award, which from my perspective is the top award of the competition, encompassing not only safety, but also professionalism, team spirit, knowledge and presentation,” said team adviser Catherine Smith ’98, ’08, who is also a senior faculty lecturer and the chief flight instructor for aviation.
The team also won the Safety Award in 2015. In 2016, the team finished in the top 10 in six out of the nine events.
The mission and goal of the flight team is to promote all aspects of aviation excellence including safety, skill development, education, and career opportunities through competition. Students from any major can join the team, which has more than 35 members. The team goes back to the 1980s, if not earlier, but took a 10-year hiatus along the way before starting back up in 2013.
Flight Team President Ethan Beegle, a junior majoring in flight technology and operations, joined the team to be part of an organization that would utilize his pilot skills and help him network in the aviation industry.
“Competition week is probably my favorite week of the school year,” he said. “It was very stressful during the days leading up to competition, but it was very rewarding getting to be part of the competition. I had a lot of fun getting to hang out with my team and talking to competitors from other teams.”
The team competes in Region III, one of 10 active regions nationally, which includes Ohio University, Kent State University, Western Michigan University, Ohio State University and a few other inactive universities.
“We have an incredibly strong region,” Smith said. “We’re up against the best of the best in NIFA.”
At the regional competition, each school brings a team of its best students to compete in ground and flight events over the course of a week. The events include:
“We spend a lot of our time building up to the regional competition,” Smith said, adding that this season there was nearly a 100 percent turnover in student team members. “Head Coach Rebecca Warner was extremely dedicated preparing the students in the short amount of time we had this year.
“I couldn’t be more proud. They are such a dedicated group and represented BGSU with great professionalism and integrity throughout our practices this year and ultimately at the competition.”
Both Smith and Warner participated on the team as BGSU students.
While the goal of the regional competition is to qualify for nationals in the spring, Smith said the event also provides opportunities for applying knowledge and networking.
“It definitely gives the students practical experience,” she said. “It’s a beautiful example of the synergy between the flight lab, classroom theory and hands-on experience. The students really value the opportunity.”
Beegle agreed, saying, “The Flight Team is like a family to me and I couldn’t imagine not being a part of it. I love being a part of an organization that focuses on my career path and helps me heighten my pilot skills. Joining the Flight Team is probably one of the best decisions I have made.”
In the off-season, students recruit new members and focus on philanthropic activities. The team has worked with the Wood County Committee on Aging and met with senior citizens who used to be active in aviation; they endeavor to support Habitat for Humanity as well.
The team is currently hosting a Hurricane Maria Relief Drive to support the family and community of one of its members, who is from the Caribbean island of Dominica. On Sept. 18, Hurricane Maria caused widespread destruction, loss of life, nationwide power and water loss and severe damage to the communication networks of this island.
The team is also already thinking about next year’s regional competition.

“The nature of these ground and flight events requires certain skills and techniques,” said the team’s Social Media and Marketing Officer Patrick Rolle. “The only way to perfect those skills and find those techniques is to practice. I also personally evaluated my performance at competition, noting my strengths and weaknesses and developing a strategy that improves my performance.”
Rolle is a second-year international student majoring in aviation with a specialization in flight technology and operation. He became interested in the joining the Flight Team even before coming to BGSU.
“I saw the Flight Team as being an incredible way to get involved, sharpen my skills as a pilot and establish important connections within the aviation industry,” he said.