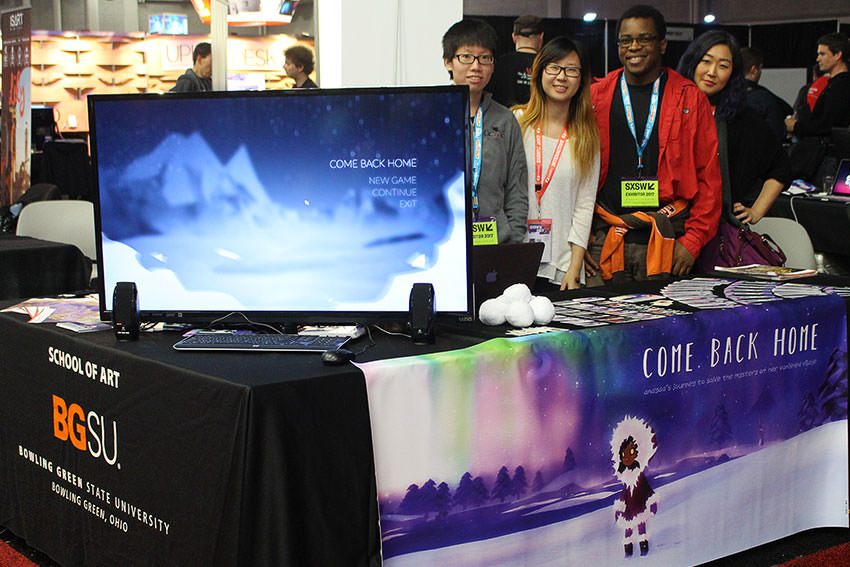 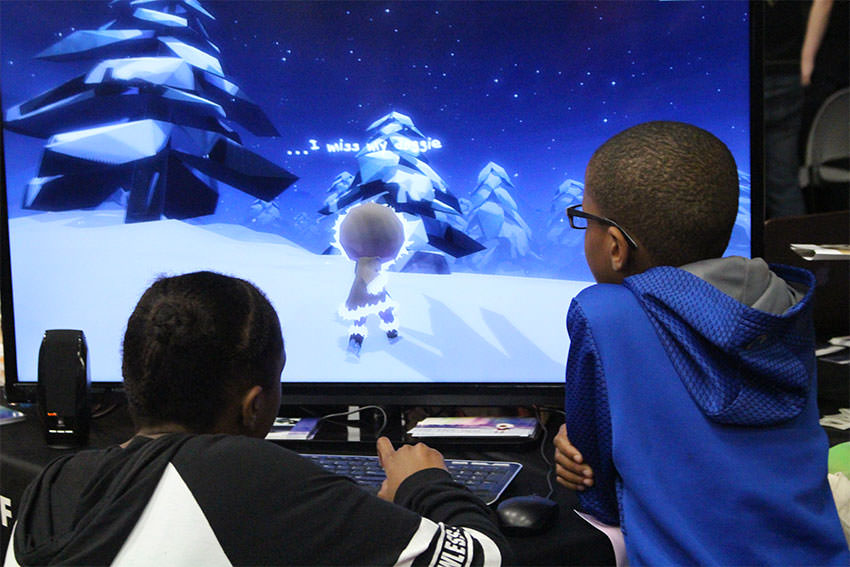 A video game about a young girl whose goal is to find why her village vanished was the ticket for a group of Bowling Green State University students to participate in the recent South by Southwest (SXSW) Gaming Student Showcase in Austin, Texas.

“Come Back Home: The Tale of Anaaya” — the work of director Xiao Yang, producer Jonathan Ampiaw and developer Che Shian Hung — earned the right to compete at the massive international competition that is part of the famed SXSW conference and festivals. Joined by School of Art faculty members Heejoo Kim and Kim Turner Young, the team reveled in the experience, which Hung described as “intense and exciting,” to be among so many developers, artists and fans of the gaming industry.

“It was a great opportunity to share our work with others and to see the work of others,” Hung said.

In addition to exhibiting the game to the thousands of conference participants and visitors, the team was one of a select group that got to pitch their creation for the possibility to receive funding. They didn’t receive financial backing; however, they did have a life-changing experience that also provided significant feedback about how to enhance their fledgling game and navigate the competitive gaming industry.

“We saw what we needed to work on, which was a great starting point for us,” Yang said.

One of the eye-opening revelations at the competition was how fortunate they were to be there, given the fact that “Come Back Home” was just five months old. Of the hundreds of games represented at the competition, most had been under development for two to three years and by teams and gaming companies with many more people and resources, Kim said.

Of the classes’ several teams established during the art-computer science alliance, “Come Back Home” was the only game that continued beyond the boundaries of the class. Yang, an international MFA student from China; Hung, an international computer science and statistics student from Taiwan; and Ampiaw, a BFA digital arts student from Ohio, agreed the bond they developed helped motivate them and keep them focused on the goal of producing a fun, entertaining and successful game. Ampiaw and Hung graduated in December, but because of their commitment to the team, they have continued to work on the project as they pursue their own professional careers. The team also credits digital arts student Anthony Schaible, who helped secure the spot for SXSW; Jon Moody, who composed the music for the game, and Spencer Calcamuggio, another computer science student whose programming expertise was invaluable during the process.

They worked long hours on the game that is part of the burgeoning gaming industry. However, “Come Back Home” is different from the majority of games pitched at SXSW, Yang pointed out. Instead of being action-based play, “Come Back Home” is more of a non-linear narrative. 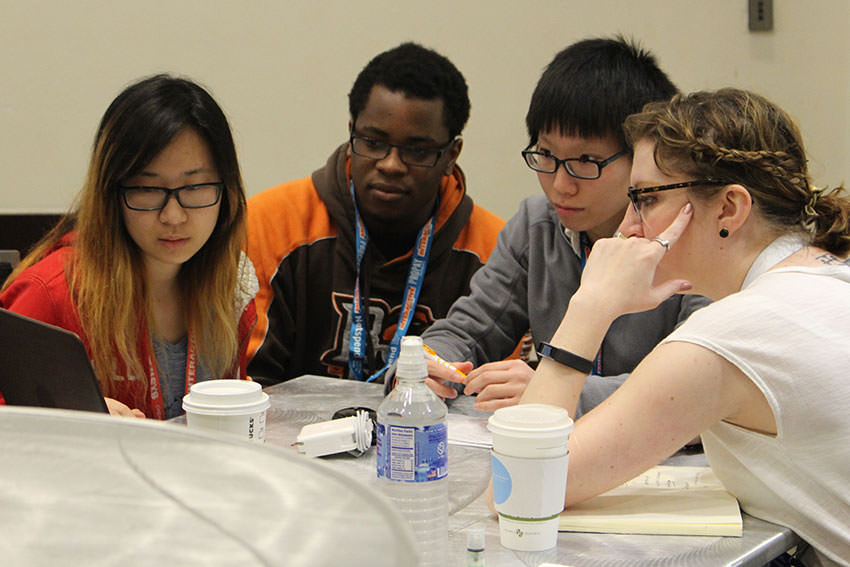 Digital arts faculty member Kim Turner Young (right) works on the game pitch with student team members (from left) Xiao Yang, Jonathan Ampiaw and Che Shian Hung.
The premise of the game is based on the myth of a vanishing village near Angikuni Lake, Yang said. Anaaya, the story’s main character, returns from a fishing trip to find her village mysteriously abandoned overnight. All alone, Anaaya must find out where her village has gone and how she can reunite with them.

The story’s basis is personal for Yang, who left China as a child, but whose search for her roots is similar to Anaaya’s discovery of her culture throughout the game’s story.

“Anaaya’s discovery is also about my rediscovery of my culture and trying to figure out why even after 16 years in the United States I still am not quite at home,” she said. “Those gray areas of culture and integration are part of my life and Anaaya’s.”

Once the game concept was decided, there were countless hours spent developing the modeling environment, aesthetic components and programming.

“We had a rough idea of the game play and how to visually represent the idea, but when we talked to computer science about the functionality, we learned how difficult it might be,” Ampiaw said.

The game took a lot of “back and forth development,” Yang said, adding, “but I enjoyed working with the team. Everyone worked really hard.”

“The game’s graphics are visually beautiful,” said Young, and the team has worked tirelessly to put together the visuals, the programming, the pitch, and marketing in preparation for the gaming competition. “It has been a fantastic, real-life opportunity to show students the process.”

One of the highlights during the conference, Ampiaw said, was when a couple who had tested the game came back after trying many of the games throughout the competition and reported that "Come Back Home" was their favorite because of the visuals and the unique storytelling platform.

Because Yang will graduate in May and the others have already graduated, the team is adding some finishing touches based on what they learned at the conference. They plan to release the game for free on their website once it is completed.