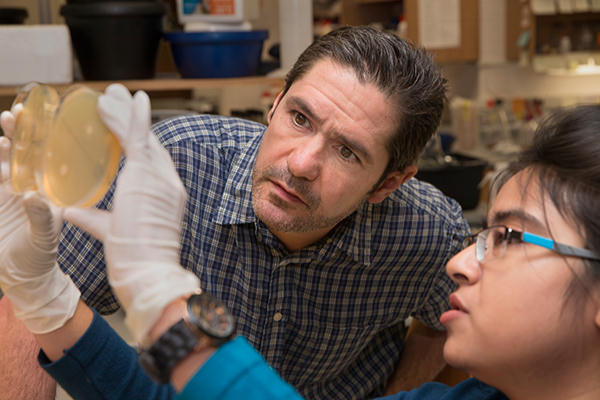 Dr. Hans Wildschutte, biology, has his eye on finding answers to the serious global issues of antibiotic resistance and novel drug discovery. The research in Wildschutte’s lab focuses on finding environmental bacteria that can kill one or multiple pathogens.

A paper, “Environmental Pseudomonads Inhibit Cystic Fibrosis Patient-Derived Pseudomonas aeruginosa,” recently accepted by the journal Applied and Environmental Microbiology, is another step toward that goal. The Pseudomonads findings are an important discovery in the battle against antibiotic resistance.

Wildschutte also ties his lab’s research into his undergraduate Introduction to Microbiology class that follows the Small World Initiative (SWI), which addresses antibiotic discovery through an innovative citizen science curriculum.

The bacterium Pseudomonas aeruginosa infects the lungs of cystic fibrosis patients and causes a serious life-threatening illness. Most strains of P. aeruginosa are multidrug resistant, which complicates cystic fibrosis treatment, leading to failure of the treatment in patients or adverse effects from advanced antibiotic drug regimens.

The study, in collaboration with Dr. John. J. LiPuma, a physician treating cystic fibrosis patients at the University of Michigan, looked at 30 different pathogens isolated from the lungs of patients with cystic fibrosis and tested 330 environmental isolates against them. The cystic fibrosis-derived pathogens are useful in research because they are opportunistic and only infect people who have cystic fibrosis or a compromised immune system.

“When we first started this, we knew some of the cystic fibrosis pathogens were multidrug resistant,” Wildschutte said. “Simply by co-growing them together, we can see what environmental isolates are able to inhibit the growth of these pathogens.”

For example, one of the pathogens was impacted by 30 different strains and another pathogen was inhibited by more than 35 isolates, Wildschutte said. “It’s pretty remarkable.”

The research has been very productive to date.

“It’s the first study that has been done in such a broad context,” Wildschutte said. “We are looking at multiple environmental isolates and their range in activity against multiple different pathogens. If we pick strains from distinct environments and that are inhibiting different pathogens, then that increases our chances of identifying something new. That’s the approach that we’ve developed at BGSU, and so far, we haven’t found the same thing twice.

“The problem with antibiotic resistance is serious,” he said. “We are approaching the pre-antibiotic era prior to the 1940s when we didn’t have antibiotics. Essentially people will start dying from simple infections because they will be infected by bacteria that are resistant to all antibiotics.”

The success to date allows him to extend the research to demonstrate how the different strains are producing unique compounds.

“It’s a pipeline now that we’ve generated,” Wildschutte said. “We have a unique collection of 330 strains that we are just going through now.” It has taken three years to get the process up and running, but that now has significant success because of the number of environmental strains that have activity and the broad utility of the research workflow application.