Imagine being able to work for your current company while traveling around the world. That’s exactly what alumna Cassie Utt '13 had the opportunity to do through a program called Remote Year.

Utt was chosen to participate in the Remote Year program, which brings 75 people from around the world together allowing them to spend a year traveling to 12 different destinations. Those destinations include Dubrovnik, Croatia; the island Ko Tao in Thailand; and Buenos Aires, Argentina - spending a month in each location.

Utt traveled with Remote Year from June 2015 to June 2016, which came at a convenient time in her life. 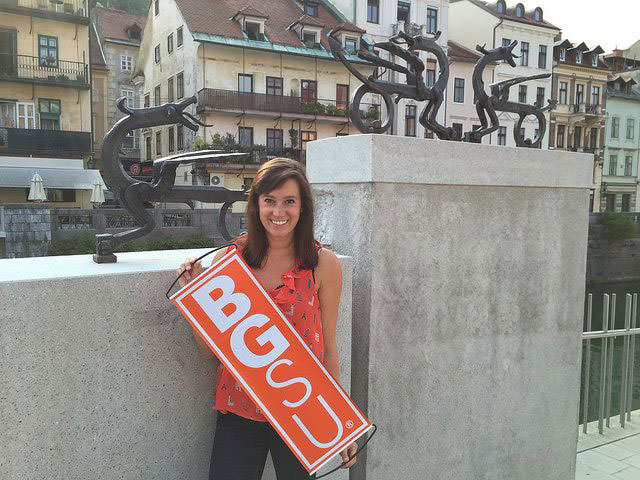 “Both my apartment and car leases were up. I put everything I owned into storage, and donated or sold just about everything else,” Utt said.

While the timing was convenient, she still had to convince her employer, Eaton Corp., that it was a good idea.

“I created a business proposal explaining the benefits of being able to connect with other Eaton companies overseas,” Utt said. “Most of the work that I do is communicating with people all over the world virtually, which made having to work remotely an easy transition.”

Utt paid for everything on her own. The $27,000 cost covered housing, travel insurance, planned events, meals, work hubs with Wi-Fi and most of her traveling costs.

Utt was a double major at Bowling Green State University, computer science and music vocal performance, which helped her learn time management, a challenge for her while overseas.

“I had to make time to connect and make friends in different countries, while also doing my job and making time to explore my surroundings,” she said.

While overseas, Utt had the opportunity to visit 14 Eaton locations around the world.

“I was surprised with how similar the offices overseas were," said Eaton, a multinational power management company. "The Eaton culture was in every office; everyone was very supportive and very nice to each other.”

The best thing about Utt’s Remote Year experience was getting to know the group of people she traveled with.

“Everyone came from different countries, occupation and backgrounds,” she said.

Utt also was able to share some of her experiences with her friends and family. Her mother, who had never traveled overseas, came to visit her in Italy. Utt's sister met her in Vietnam for Christmas.

“Being able to share some of the culture around the world with my family and friends and to open their mind to these cultures was one of the best parts of this experience,” she said.

Utt, who grew up in Salem, Ohio, was able to travel outside of the destinations provided through Remote Year, making it a total of 18 countries that she visited.

One of her favorite stops was in Prague, which was the first location for the Remote Year group. It’s also where she was able to work with an opera as she took a few lessons to improve her technique and musicality.

“I was also able to see one of my Prague voice teachers at the National Theatre in 'La traviata,'" Utt said. "I’m embarrassed to admit that I’d never seen the opera before, just bits and pieces in classes at BGSU. I loved the show, and certainly hope to be a part of it someday."

Another one of her favorite visits was Istanbul, Turkey.

“I appreciated the city vibe and culture and admired the focus on art and innovation,” Utt said.

Utt would recommend Remote Year to anyone who may be interested, but suggests analyzing your current life situation first.

“I think it’s really awesome if you have a job that allows you to do it, or you have the right financial security to do it on your own,” she said.

Utt wrote about her experience in a blog called, Sincerely, Cassie.