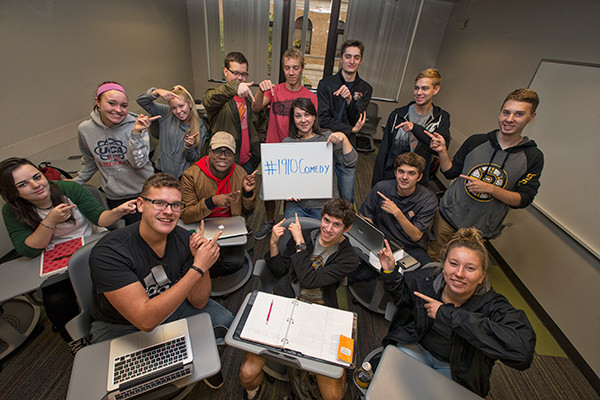 A group of freshmen have been limbering up their “funny bones” this semester as part of the 1910 Comedy 101: Exploring Our World through Humor class. Taught by doctoral student Cori Hall Healy, the class has students keeping a daily “joke journal” and “learning to look at the world and be fascinated,” Healy said.

In the process, they are learning more about themselves, developing their public speaking skills and gaining confidence by presenting their jokes in a class where ego is not an issue and everyone is supportive, said Healy, who in another life was a standup comedian on the circuit of comedy clubs.

The class will get what may be for some their first experience with live comedy when they host the 1910 Comedy Benefit at the Funny Bone Comedy Club at Fat Fish Blue in Perrysburg this Sunday (Oct. 30). Beyond entertainment, the show also has a serious purpose: all proceeds will go to Cocoon Shelter for Wood County women and children.

“The students have embraced the social and communal aspect of the show,” Healy said. “They’ve designed T-shirts to sell and posters and have seen about promoting it on the radio. I’m so proud of them.”

Students will also get to see their teacher perform. Healy will be the “special guest” at the show, which she booked with friends from her performing career. The headliners are Tim Northern, of the nationally televised “Last Comic Standing” and a finalist on “Star Search” whose style tends toward the intellectual, and Palestinian-American comic Mike Easmeil, who has appeared at the Kennedy Center, Carnegie Hall and in the Arab-American Comedy Festival. CB Wilkins, of Comedy Central’s “Up Next Contest,” will host.

“I wanted people who did ‘clean’ comedy that was appropriate for the students but who also are charismatic and care about kids and about comedy,” Healy said. “It’s very difficult and meaningful to do this type of comedy. We’ll have a question-and-answer time after the performance, and I know they will give intelligent and thoughtful answers to the students’ questions about life as a comic and how comedy works in our society.”

What’s the key to being a successful standup comedian? “It’s having your own ‘schtick’ and relatable material,’” Healy said. “You can make the phone book funny if you have self-awareness and an understanding of how the audience perceives you. Successful comedy also has a cadence; it’s almost musical.”

The 1910 Comedy class has a robust academic component. In addition to keeping their joke journals and working in small, collaborative groups to find their unique voice and perspective, students are studying the three types of comedy: superiority, or making fun of things; incongruity, or finding the bizarre in life; and relief, playing with social taboos. Healy describes the course format as “explorational,” examining the complicated nuances of what makes something funny.

“I’m a big fan of comedy, and it’s opened my eyes to the different kinds of comedy there are,” said Nicholas McBride, a criminal justice and forensic science major from Bowling Green who designed the flier for the Funny Bones show. “We’ve also been studying the history of comedy and how it’s been performed through the ages.”

The writing assignments have been especially enjoyable, said Sam Sulewski, a visual communication technology major from Perrysburg. “I find I do them before my other assignments.”

He and McBride said the class has made them more observant about things going on around them and more analytical of the humor they encounter and able to identify the type.

Living in residence halls, they find themselves talking to themselves continually, and some of what they say and do makes its way into their joke journals. “It helps you adapt to dorm life,” McBride said.

Healy came to BGSU as a Ph.D. student in American culture studies, not really planning to take her comedy calling into her academic life, but “sometimes the research leads you in the best direction,” she said. She is exploring why comedy is so often marginalized in our culture compared to other art forms. “The contribution of comedians like Richard Pryor and George Carlin is unprecedented and so large,” she said.

However, in academia, the field of comedy studies is well-established. “The Journal of Comedy Studies,” for example, published in England, is a valuable resource and outlet for scholars, she said.

Tickets for the Oct. 30 show are $10 and can be purchased online in advance. Showtime is 7 p.m.; doors open at 6. Fat Fish Blue is located in Levis Commons, on Ohio 25 in Perrysburg.