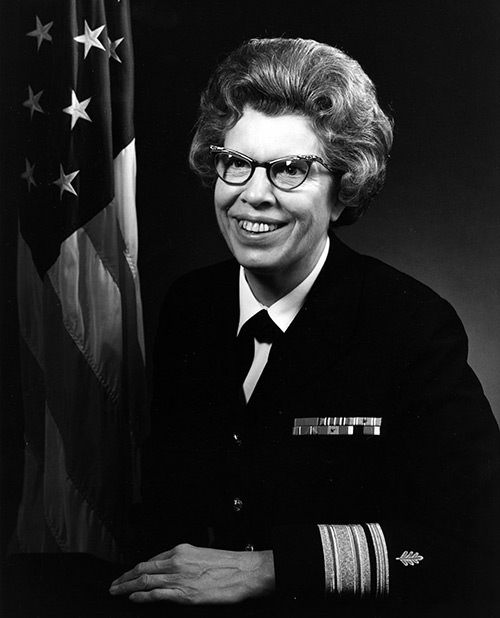 Dr. Alene Duerk became famous very late in her long and highly decorated military career. When she received a Doctor of Human Relations degree from Bowling Green in 1973, Duerk occupied a prominent place in the national spotlight as the first female admiral in the history of the U.S. Navy.

“There was a lot of weight on my shoulders,” the northwest Ohio native said. “There was a lot of publicity about me being appointed admiral, since I was the first female to receive that rank, so every place I went there was some kind of media seeking me out.”

Duerk was recognized as a pioneer in the Navy nursing corps, where she spent most of her time in the military, but the promotion to the rank of admiral dramatically raised her profile.

“It was a nice distinction to have, and to be recognized as the first, but I wanted to make certain that I used that notoriety to do as much positive as I could,” she said of her honorary BGSU degree. “Bowling Green was one of several universities that contacted me, and I was very honored to accept that degree. That’s a place that was very close to home for me, and it meant a lot to have the folks there seek me out to come receive that degree.”

Duerk was featured in magazines and on radio and television, but the swirl of media that followed her appointment as the U.S. Navy’s first female admiral did not distract her from what she saw as a key part of her mission — to encourage the women in the service to push for excellence.

“There was a lot of publicity and in every town I went to there was a media event,” she said. “I traveled a lot and made extensive trips, both here and overseas. And whenever I visited naval hospitals and naval facilities, I tried to speak with the women serving in the Navy, and not just the nurses.”

Duerk’s journey to the top tier of the command structure in the Navy started in 1943. She was born in Defiance, went to school in nearby Holgate, and then attended nursing school in Toledo, graduating just as World War II broke out. After working at Tiedtke’s department store in Toledo, she entered the Navy and served as a nurse at the entry-level commissioned officer rank of ensign.

She worked at the National Naval Medical Center in Bethesda, Md., for about six months before being assigned to a hospital ship in the Pacific. The atomic bombs were dropped on Japan while her ship was en route to support an invasion force, so the mission changed to one of treating members of the fleet and prisoners of war while moored in Tokyo Bay.

“We were there in Tokyo Bay before the peace treaty was signed, so I felt like we were really a part of history,” she said. “It was an anxious period. You didn’t know who was coming aboard, and you didn’t go ashore. It was not very safe, so we really had no place to go.”

Following the end of the war, Duerk went into the inactive reserves and earned a degree in hospital ward management and education, and then worked at a hospital in Detroit for a couple of years. She was recalled into the military when the Korean War started, and was assigned to a teaching role at an installation in Virginia.

She also worked as a nursing instructor in Philadelphia, and then as a recruiter in Chicago before being sent to a military hospital in the Philippines. From there, Duerk moved onto the role of assistant chief nurse at a large naval hospital in Japan, before taking an assignment in California as the senior instructor at a hospital school.

“I was always moving around, seeing different parts of the world and performing different duties,” she said. “I guess that is the nature of military service.”

Duerk received promotions along the way, and soon was working in the Pentagon as the chief liaison for military nurses with the staff of the Secretary of Defense. She then was moved back to a naval hospital in Chicago as the chief nurse, before being recalled to Washington, D.C., as the director of the U.S. Navy Nurse Corps.

“Since I was the first, that was no small thing, so I did feel some pressure at the time,” Duerk said. “Now I was not only supposed to know all about the nurse corps but also all about the U.S. Navy. It was a lot to take on because when you are the first women in any high-profile role everyone is watching you.”

Duerk retired from the Navy in 1975, and initially focused on volunteer work in the Washington, D.C., area. Now 96 years old, she has lived in Florida since 1981, and said friends still refer to her as “admiral.”

“I never mapped it out like this,” she said. “I didn’t go into the Navy for a lifetime — I went in for six months — but I had an amazing career and have a lot of good memories. I hope I did my duty.”