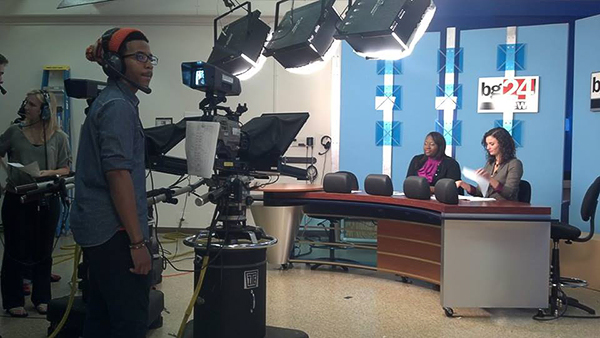 Freshman Brooke Ebersole almost attended Ohio University, but one student organization at BGSU got her to change her mind: BG24 News.

BG24 News is the student-run news program on campus that airs live sports, news and public affairs shows to all of Wood County.

“I fell in love with their broadcast. I got to watch them do a live show, and there was a freshman on the air. That’s when I knew I wanted to be a Falcon,” Ebersole said. And as a freshman, Ebersole became a reporter, appearing on air multiple times.

BG24 News was started in 1992 when a small group of students wanted to create a “real-world” news program on campus. “Numerous people warned us that we should ‘be prepared to fail,’” said BG24 News co-founder Chris Hursh ’93. “Twenty-two years later, I’m happy to report that they were wrong.”

Hursh is now a photojournalist at WKRC-TV in Cincinnati. He and his wife, Angela, are Falcon Flames and met while working at BG24 News.

Recently, BG24 has seen unprecedented growth under faculty adviser Ken Garland, School of Media and Communication. Just a year ago, the organization only had enough hands to broadcast twice a week. But when the fall 2013 semester began, BG24 News expanded to five live shows a week. Plus, it increased its online presence by airing online news updates, creating a website and posting to Facebook and Twitter.

“That’s not me, that’s them,” Garland said. “For the last two years that I’ve been here, it’s been a very committed group. It’s been a collection of students who have worked very hard and have wanted to work hard to make everything better.”

The organization provides primarily broadcast journalism and telecommunications majors (though it is open to all majors) with opportunities to anchor, report, shoot video, direct, produce, write and operate cameras. And that’s not even half of the positions needed to make a live show work.

Senior telecommunications major Madeline Fening is the news director for BG24, responsible for supervising the news content for the shows and online. She holds reporter meetings twice a week to edit stories and discuss new story ideas.

Fening admitted that the most stressful part about her job is the emails, but said she does not mind. “The stressful amount of emails, meetings and late nights are all worth it to me. At the end of the day, my best friends and I are providing Bowling Green students and community members with important and thoughtful coverage,” she said.

Hannah Hilyard is a senior broadcast journalism student who began working at BG24 News more than three years ago as a writer for news shows. She started producing her sophomore year, and now anchors and reports every week.

“The opportunities and advantages BG24 News gives you when looking for internships and jobs are incomparable,” Hilyard said.  “I have interned in Toledo, Ohio, and Cheyenne, Wyo., and have covered anything from presidential visits to haunted houses. That is all thanks to BG24 News.”

While finally hitting its stride, the group had a major setback during winter break. Due to cold weather, a water pipe burst in West Hall, damaging much of BG24 News’ control room and studio.

But this has not dampened the group’s spirits. The newsroom in the basement of West Hall was not damaged, and WBGU has allowed BG24 to use its equipment to continue airing live broadcasts.

Students who have been involved with the organization over the past two decades want to see it continue to flourish.

“The program is so much more than just learning about TV news. It really teaches you something about yourself,” Hursh said. “Along the way you’ll make lifelong friends, have tons of fun, work long hours, make mistakes, stress out, laugh, cry, and ultimately gain that all-important ‘real world’ experience you need to get that first job.”