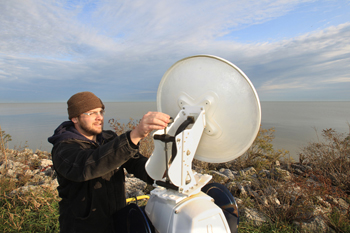 BOWLING GREEN, O.—Wind turbines may offer a positive source of renewable energy, but Bowling Green State University and University of Toledo researchers are looking into the potential impact these giant fans might have on bird species if constructed along the Lake Erie shoreline.

As part of the Coastal Ohio Wind Project funded by the U.S. Department of Energy, researchers are continuing their collaboration in conjunction with the 2010 study that looked at the effects of wind turbines on bird and bat migration. The turbines in that study are located outside Bowling Green, off Route 6.

An increased interest in turbine development along the Lake Erie shoreline propelled the idea behind the current study, Dr. Verner Bingman, BGSU Distinguished Research Professor of psychology, said. The team is in the process of collecting data at the Ottawa National Wildlife Refuge.

“We’ve moved away from the Bowling Green turbines and are more interested in looking at the behavior of birds in the absence of turbines along the shore of Lake Erie,” he said.

The team started its quest looking at the potential for wind development near the BGSU Firelands campus, Dr. Jeremy Ross, a BGSU research associate, said.

“It started off as a very localized project,” he said. “But it has expanded to a much more regional venture.”

Principal investigator for the project is Dr. Peter Gorsevski, geology, who is conducting a sophisticated geographical-imaging analysis of the flight-behavior data the team is gathering.

The researchers will continue the objective study of flight behavior patterns through this spring. Although they cannot yet come to conclusions, Bingman says they are seeing some trends in the data.

Bingman suggests that body mass of the songbird may come into play in deciding whether to cross the lake.

“If you’re a smaller bird, with less fat, it’s a bigger risk that you might get stuck over the lake’s empty space,” he said. “If you’re a larger bird, with more fat, the risk may not be as large.”

“When [songbirds] reach the lake, those that are crossing seem to rise in elevation, which is kind of interesting and unexpected,” Bingman said.

Ross suggests the birds’ rise in elevation may be due to wind turbulence patterns. This suggests that turbines offshore would be less of a risk to migratory songbirds than turbines onshore, he said.

“It is a single season study, but at the very core, we are finding over 10,000 birds and many, many detections,” Ross said.

To track the songbirds, the team uses radar processing, infrared detection cameras and acoustic recorders. The team from UT is primarily responsible for the “engineering part” of the research, and the processed data are then passed on to Bingman and Ross, Dr. Mohsin Jamali, a professor in the UT College of Engineering, said.

“We are very excited about it,” he said. “We are all working to meet a common goal.”