The Oaks Dining Center Roof is home to the “Green Roof Project” and other environmentally sustainable features, which include large sections of green ground cover with native perennials, a deck made of repurposed wood, and in the summer, a bounty of flowers, vegetables, fruits, and herbs. The project is a partnership between the Office of Campus Sustainability and BGSU Dining.

This summer the garden was planned and is maintained by Alycia Bowerize, a BGSU Dining Prep Cook. The opportunity to work in the garden was offered to her by Executive Chef Marissa Riffle, to which Bowerize enthusiastically accepted. Bowerize’s planning process began with an evaluation of the site, checking what needed to be fixed or replaced, assessing the differing amount of sunlight each area receives, and asking about what has and has not worked in previous years.

The garden’s regular plants include, raspberries, blueberries, tomatoes, various herbs, multiple kinds of pepper, cucumbers, zucchini, and lettuce. The garden is also the home of several perennial plants like strawberries and sunflowers. New to this year, Bowerize decided to try to grow onions, brussel sprouts, bok choy, and Swiss chard. She also tries to select attractive annual flowers to put in hanging baskets to bring some color and compliment the reclaimed barn wood of the area.

A substantial issue that the garden had at the onset of this summer was the mint plants dominated their planting box and their root systems spread to other boxes, preventing the growth of the other plants. Ultimately, the root systems had to be sawed to be separated. The more common and less severe challenges Bowerize faces includes, replacing hoses, weeding, trimming perennial plants, and keeping the plants adequately watered to compensate for the elevated rooftop summer heat. When selecting the species of plants that will be grown on the roof, Bowerize consults with Chef Marissa and the other chefs about what plants they want to try to use in their kitchen, as well as, her own knowledge, experience, intuition about what she knows will be used in the kitchen, and personal preference.

Other than the kitchen, the produce grown is used for special events on the roof and is offered to administrative staff to take home or consume as a snack at work. Admittedly, Bowerize takes very little for herself, preferring to share the bounty.

Interested in seeing this little-known gem of green and all the other sustainable features on the Oaks’ Roof? Contact the Office of Campus Sustainability at 419.372.9949 or greenbg@bgsu.edu to arrange a tour while the weather is beautiful! 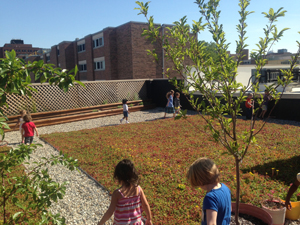 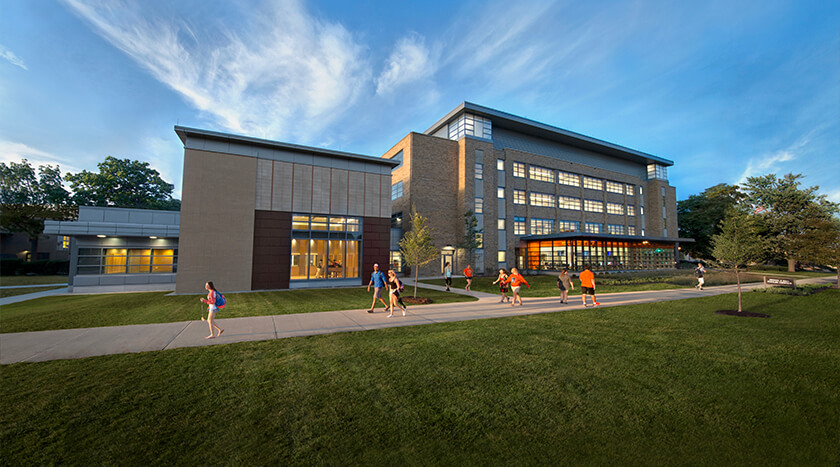 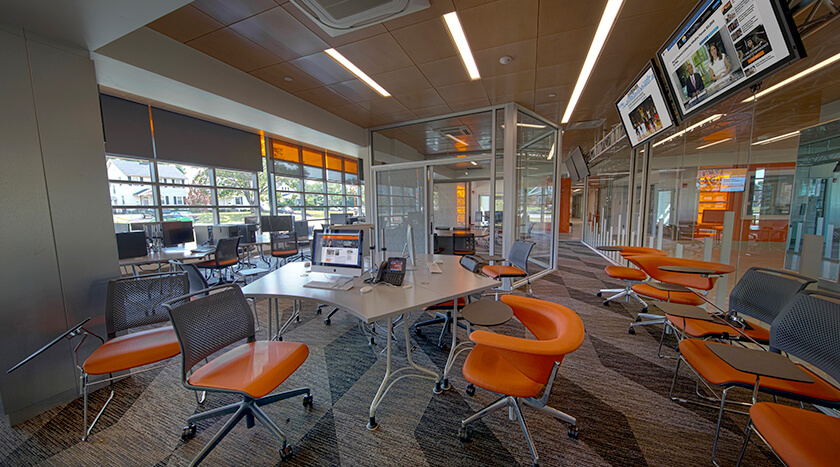 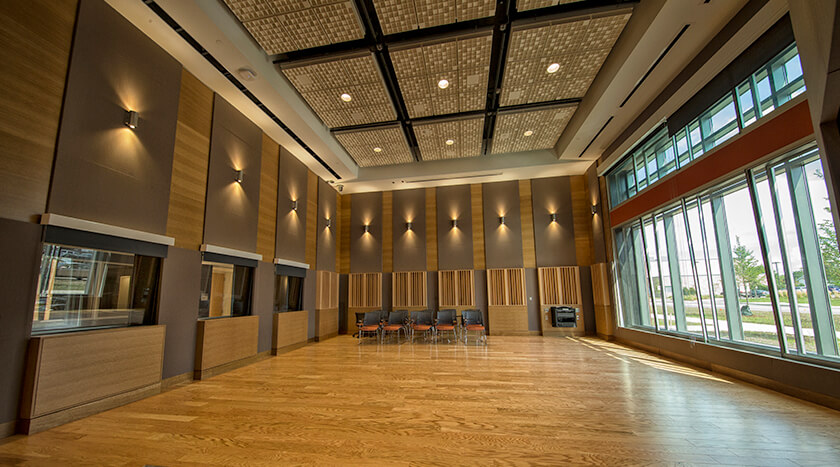 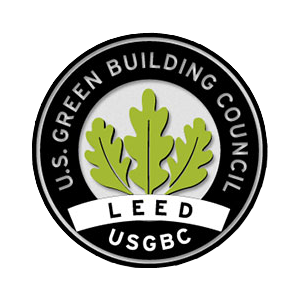 Yet another renovated building at BGSU has received certification for its environmental components. The building formerly known as South Hall underwent a huge transformation and reopened in 2016 as The Michael & Sara Kuhlin Center (“Kuhlin Center”).

As a part of the renovation, the west side of the building gained an additional wing, spaces from the old building were converted into a media convergence lab, active-learning classrooms, video and audio production suites, a media effects lab, and lecture spaces with studio control rooms. The design of some of these new spaces allows for both production and teaching to happen at the same time. The Kuhlin Center is the home of the School of Media and Communication, which includes the communication, journalism and public relations, media production and studies departments, as well as master’s and doctoral programs in the media and communication field.

The Kuhlin Center renovation scored 62 points out of a possible 107 under LEED-NC v2009, earning it a gold certification. The renovation project scored points in all seven LEED categories, which are, sustainable sites, water efficiency, energy and atmosphere, materials and resources, indoor environmental quality, innovation in design, and regional priority credits. The Kuhlin Center features a reflective roof surface, an energy efficient design that has reduced energy consumption by 18%, 70% of its purchased energy comes from a sustainable source, 25% of the renovation was constructed using recycled materials, 22% of the renovation was constructed using local materials (within 500 miles of BG), 63% of the wood materials used for the renovation were Forest Stewardship Council certified, has a new A/C and Heat system, and low mercury lighting features. Additionally, the Student Green Initiatives Fund supported a sustainable landscape project around the building that features native plants and organic soil.

This spring’s WYMO (When You Move Out, Don’t Throw It Out) program received record amounts of donations of still usable items, as well as non-perishable food, which was collected between April 22 and May 6.  Student volunteers transported items from residence halls and other locations to the main collection center at the Kreischer Late Night Dining area where a sale to the university community took place on May 23 and 24, raising money for sustainability education programs.  Donations of items, as well as all of the food to area food pantries and non-profit organizations also took place.  In all, over 10 tons of items were collected thanks to the generosity of BGSU students.

WYMO transitions into the “Re Store”, which is BGSU’s reuse program, which is open to the entire university community throughout the academic year.  Office and school supplies such as 3 ring binders, folders, desk top organizers, as well as many other misc. items, including books, decorations, and BGSU clothing are available at monthly Re Store events which take place at the Kreischer Late Night dining area for free!  You definitely do not want to miss these events!  Additionally offices are invited to donate surplus office supplies and other items to the Re Store at any time.  Simply submit a Maintenance Request and in the body of the request, state that you have items for donation to the Re Store that you would like to have picked up and we will take care of it!  Why buy new, when you can reuse?  To be sure you get notification of these events, you can “like” our Facebook page (BGSU Sustainability) and look for our announcements in the Campus Update.

Jacob Earnhart is the intern working on BGSU’s native prairie spaces this summer for Campus Operations. He is a senior graduating in December and is majoring in Environmental Policy and Analysis.

Jacob focuses his efforts on three main areas, these include: Shatzel Hall, where the Native Plant Garden is located, the Butterfly Habitat Restoration Project on Poe Rd. across from the former golf course, and a Native Prairie owned by the university located at the University House on Wintergarden Rd. Jacob told us that there are tons of species of native plants that grow in the prairies, some of which include little bluestem, big bluestem, lupine, common milkweed, lemon mint, Virginia mountain mint, purple cone flower, New England aster, black-eyed Susan, brown-eye Susan, stiff goldenrod, and  ox eye sunflower. In addition to native species of plants, he indicates that the prairies offer many opportunities to view wildlife: butterflies, bees/wasps, deer, snakes, frogs, toads, small rodents, and song-birds. “Never knowing what you’ll see each day keeps things interesting and helps me continually realize that I’m striving to make this a healthier ecosystem for all the biodiversity, it’s extremely rewarding.”

Jacob describes his job as eradicating non-prairie species from the Bowling Green State University prairie ecosystems. On a daily basis he rotates between the prairies removing nonnative invasive and native species, like tree saplings that are not part of the natural native prairie ecosystem—doing his best to attempt to eradicate undesirable plants through the uses of mechanical and chemical control techniques. Jacob described how this has impacted him throughout the summer by increasing his knowledge of prairie ecosystems and identification skills of many native and non-native plants. He stressed being able to learn and better understand the lessons and concepts of the interconnectedness of ecosystems, the processes involved in restoring ecosystems, and managing invasive species. “This internship experience has also continually reminded me about the lessons on the importance, value, and impact that a relatively small area of great habitat can have on the biodiversity of the surrounding area.”

Jacob leaves us with a tip to enjoy the native areas here on campus, “I’d like to say that the Butterfly Habitat Restoration Project on Poe Rd. has a great picnic table that makes it the perfect place to do some studying, have a bite to eat, or just relax and experience nature”.

Jacob’s plans for the future include applying to various graduate programs and sending out resumes to see where it takes him.

Like staying up to date on all of BGSU's sustainability updates? Be sure to subscribe to this newsletter to get it sent to your email inbox each month! 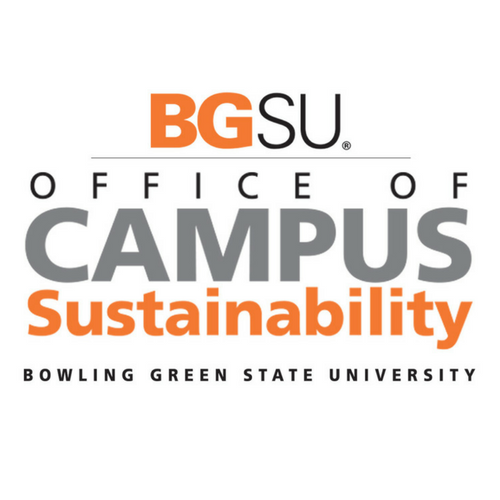