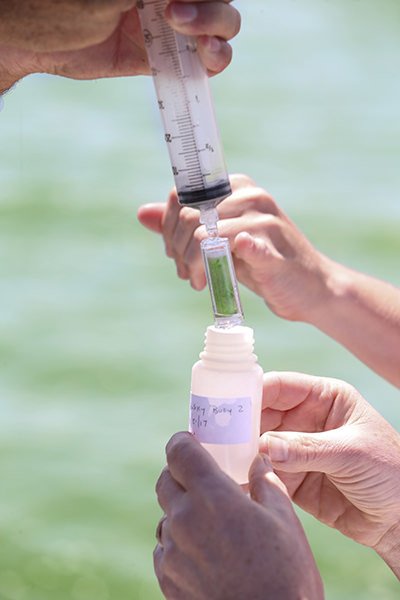 The first scientific paper to come out of the Great Lakes Center for Fresh Waters and Human Health shows that, just as in the rest of life, timing is everything. Published recently in the journal Frontiers in Microbiology, the paper reveals “a day in the life of a Microcystis bloom,” said Dr. George Bullerjahn, director of the center and professor of research excellence in biology at Bowling Green State University.

In “Metatranscriptomic Analyses of Diel Metabolic Functions During a Microcystis Bloom in Western Lake Erie (United States),” the research team showed that shifts in metabolic functions of the freshwater cyanobacteria present in toxic algal blooms take place according to the time of day. Using DNA samples collected over 48 hours following the 2014 toxic bloom in western Lake Erie that had Toledo-area residents drinking bottled water for a number of days, the scientists looked at what genes were active at different times of the day or night.

Lake Erie experiences cyanobacteria harmful algal blooms (cHAB) every year, which is only expected to get worse as the lake continues to be excessively rich in nitrogens and other nutrients coming from farm field runoff. This also causes more algae to thrive in the water, which sinks to the bottom when it dies and contributes to oxygen depletion.

“In light of concerns over the safety of water resources and human health, there is an urgent need to elucidate the factors influencing cHAB formation, proliferation, and maintenance, to better inform prevention and mitigation strategies,” the research team wrote.

BGSU is the lead institution in the center, a national collaboration among nine universities and research institutions, and is one of four universities the National Institute of Environmental Health Sciences and the National Science Foundation are funding with a total of $30 million in grants to study the effects of harmful algal blooms on oceans, estuaries and the Great Lakes.

One approach is to understand how the bacteria function and respond to conditions at the cellular level. The DNA collected was sequenced by the Department of Energy Joint Genome Institute, and the results analyzed by BGSU doctoral students Emily Davenport and Michelle Neudeck and Paul Matson along with other BGSU team members including Drs. Tim Davis and Michael McKay.

Cyanobacteria rely on nutrients such as nitrogen and phosphorous, which they must get from their environment.

“Nitrogen acquisition happens by day, using energy driven by daytime photosynthesis,” Bullerjahn said. By contrast, phosphorous uptake takes much less energy and so does not seem to be as affected by the time of day, the analysis found.

The internal circadian rhythms of the cyanobacteria are not totally responsible for the variations in gene expression, the study noted. Some variability in nutrient uptake is inevitable due to nutrient availability and changes in temperature, especially for Microcystis, Bullerjahn said. The Planktothrix bacteria that live in Sandusky Bay, for example, tolerate a much broader temperature range. Another factor is high winds that agitate the water and can cause a change in light and nutrient availability, which in turn will change harmful bloom physiology.

Like nitrogen uptake, another energy-intensive activity, cell division, also happens in the day, controlling reproduction, as well as the expression of stress genes, which control repair to cells.

“We had seen these variations in the lab but we were curious to know if there were similar patterns in a natural cyanobacterial community,” Bullerjahn said.

The samples used in the study were gathered from the same drifting patch of algae in western Lake Erie by BGSU doctoral student Emily Davenport, who also did the initial data analysis. The patch of water was tracked by a drifting buoy cast into the water at the start of the survey. Following an initial pass through the data, BGSU graduate student Michelle Neudeck then catalogued the entire data set of identified gene functions and normalized the data to show gene expression throughout the 48-hour period.

“You sample whatever is happening when you get there,” Bullerjahn said. So if the research boat reaches a site at 2 a.m., that is when the sample is collected. A basic but important step for anyone sampling a bloom is to “write down the time you collected it,” Bullerjahn said, “since we now know there are physiological changes over the course of a day.”

To reduce variability, the researchers took great care to ensure they were collecting samples from the exact same biomass in the same patch of water over the course of the 48 hours, Bullerjahn said, by using floating buoys as markers.

“This new information will inform how we analyze the center’s data collected over the last year,” he said. “We will be mindful that cells’ behavior as they’re dividing or making toxins is changing hourly.”