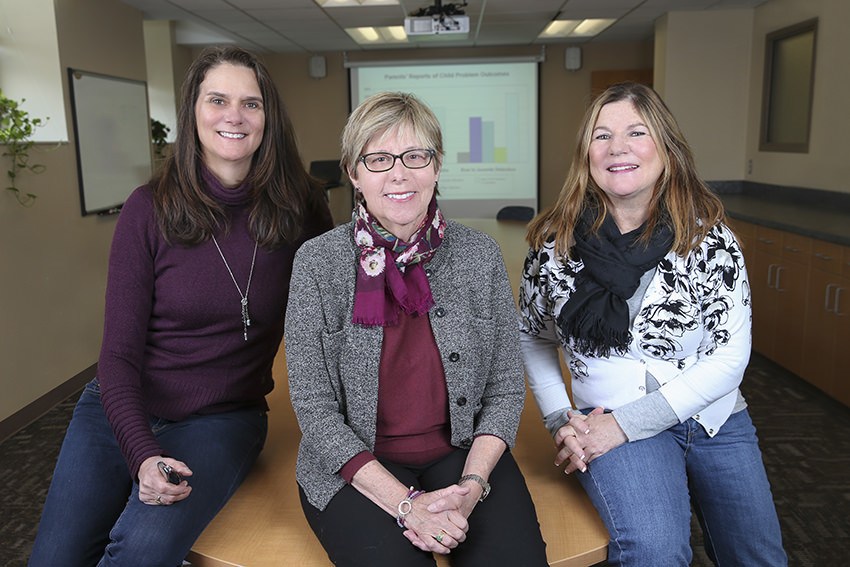 While many researchers have investigated factors that lead people to commit crimes, much less is known about how and why individuals move away from or “desist” from these kinds of behaviors.

Bowling Green State University sociology faculty Drs. Peggy Giordano, Monica Longmore and Wendy Manning will explore the processes associated with “getting out” of crime in the three-year study “Mechanisms Underlying Desistance from Crime” with support from a $797,000 grant from the National Institute of Justice.

The results are expected to fill significant gaps in the understanding of specific individual-level and social influences on desistance, and may inform future policy priorities and programs, including programs focused on female offenders. The work is an example of BGSU’s commitment as a public university to the public good.

The project is the latest phase in an ongoing study that the nationally recognized faculty have worked on together for nearly 20 years. The Toledo Adolescent Relationships Study (TARS) has followed 1,321 individuals who originally lived in Lucas County. The researchers have interviewed them six times over the years as they have navigated the transition from adolescence to young adulthood. The sample represents a cross-section of the general population and the full range of socio-economic backgrounds, with about an equal number of males and females. Today, their average age is 32.

TARS is unusual not just in being a longitudinal study of such long duration, but also in that it brings to bear the individual areas of expertise of the three faculty in analyzing and interpreting the data collected. Longmore is a social psychologist and specialist in family relations. Giordano, Distinguished Research Professor Emeritus of sociology, is a criminologist. Manning, the Howard E. and Penny Daum Aldrich Distinguished Professor in Sociology, specializes in family demography and is director of BGSU’s Center for Family and Demographic Research and co-director of the National Center for Family and Marriage Research. All three have a special interest in adolescent and young adult behavior and decision making.

The TARS research team has received funding from various federal agencies and foundations including the Eunice Kennedy Shriver National Institute of Child and Human Development, Department of Health and Human Services Office of Family Life, National Science Foundation, W.T. Grant Foundation, and the National Institute of Justice. In total, this research team has received in excess of $8 million.

The team is creating the questions for the 2020 survey recipients and the group of about 100 who will be interviewed in depth about their experiences. The study will begin in January.

“The study will focus on the effect of their intimate relationships, criminal justice experiences, and personal changes in motivation as factors that may figure into the desistance process,” Giordano said. “Our findings relating to what might be considered ‘natural’ desistance should add to results focusing on specific short-term programs."

Using a subset of participants from the last wave of surveys, the team will identify about 500 people who had some reports of delinquency to see whether they’ve managed to avoid criminal behaviors in the last several years, have intermittently engaged in it or have continued their criminal involvement.

When it comes to avoiding or committing crime, everyone is different, Longmore said.

“Some who were involved in delinquency earlier age out of it, some start late — we are interested in these different pathways,” she said. “We want to know why and how they desist. What is their understanding of how these changes have unfolded? What are their motivational processes?”

One thing the team does know is that, for people who have been involved in criminal activity, “wanting to stop is clearly a part of it, but may not be sufficient,” Giordano said. “We need to know what other factors bolster their chances of success, and what roadblocks figure into ‘derailments’ in spite of initial intentions to stop these kinds of behaviors.

“It’s a big asset that we have the structured survey data from the last six waves of over 1,000 people. We can link this wave of responses to information from prior interview waves and document factors that are associated with these different life paths.

In addition to the original participants, this time the team will also reach out to interview 25 parents and 25 romantic partners for their perspectives on what helps or hinders desisting from crime.

“We’re excited to get the parent perspective,” Manning said. “We can find out the parent’s view or understanding of their adult children’s behavior. This is the first study to do that.”

“We can also look at things like the behavior of their siblings and the experience of parental incarceration, as well as the long-term impact of substance use problems,” Giordano said. “In some families, criminal behavior, drug use and criminal justice involvement may limit the capacity of family members to offer support and positive influences. There could be multigenerational factors. We want to capture all of these social influences, including the impact of peers.”

Longmore is especially interested in the influence of romantic partners. Life events such as getting married or starting a family could play an important role in helping someone resist crime, or vice versa, she said.

“This has been a theme for a long time,” Longmore said. “Romantic partners are unique in the influence they have, for good or bad. They can contribute to an environment of illicit substance use, for example, and how do you break through that? We’ll also look closely at intimate partner violence. In some cases, people are so disadvantaged that they don’t have access to partners who are supportive and help them desist from crime.”

The TARS study is also unique in focusing on the character and impact of dating, cohabiting and marital relationships, and is thus well-suited for the study of the impact of these relationships on criminal behavior. An initial analysis, published in 2006 and widely reported in the popular media and professional journals, filled a gap in the literature on the subject and provided new insight, especially into teenage boys’ feelings and perspectives.

This seventh “wave” of the study requires developing the survey questionnaire and in-depth interview questions, the first task — and it is enormous — will be contacting the survey subjects. Some may have moved away from the area or married, some are in prison. If those randomly chosen for the face-to-face interviews are incarcerated, the team will visit them there.

“Although they may be difficult to find, very few say no,” Manning said. “It’s wonderful that they’ve stuck with us. We are fortunate they have shared their lives with us.”

After collecting the data during the first year of the grant, the TARS team will analyze it in the second year and report their findings in the third and final year. BGSU will host a national symposium on desistance, and research will be translated to broad audiences through training webinars and research briefs, along with journal articles. The data will be available to the research community through the National Archive of Criminal Justice Data.

“Our hope is that this research project could spark new research questions,” Longmore said.

In addition to its contributions to the body of knowledge, the study has provided significant opportunities for graduate students and undergraduates alike, she said. “It’s a great opportunity for students to get engaged in a research project and interact with the team as we work together to complete each phase of the project.”

“Our data collection is equivalent to a lab,” Manning said. “We use the data to train students in collection and analysis, and they get the opportunity to present at conferences. The graduate students can use the data for their own studies.”

Longmore also has an Honors undergraduate student who has a grant from BGSU’s Center for Undergraduate Research and Scholarship who is using the data for her own related but distinct study.

The TARS project and the other work conducted by Giordano, Longmore and Manning is helping prepare the next generation of sociologists who will help solve society’s problems. Over the years, their research team has published with more than 30 graduate students, and about 40 theses and dissertations have resulted from their investigations.