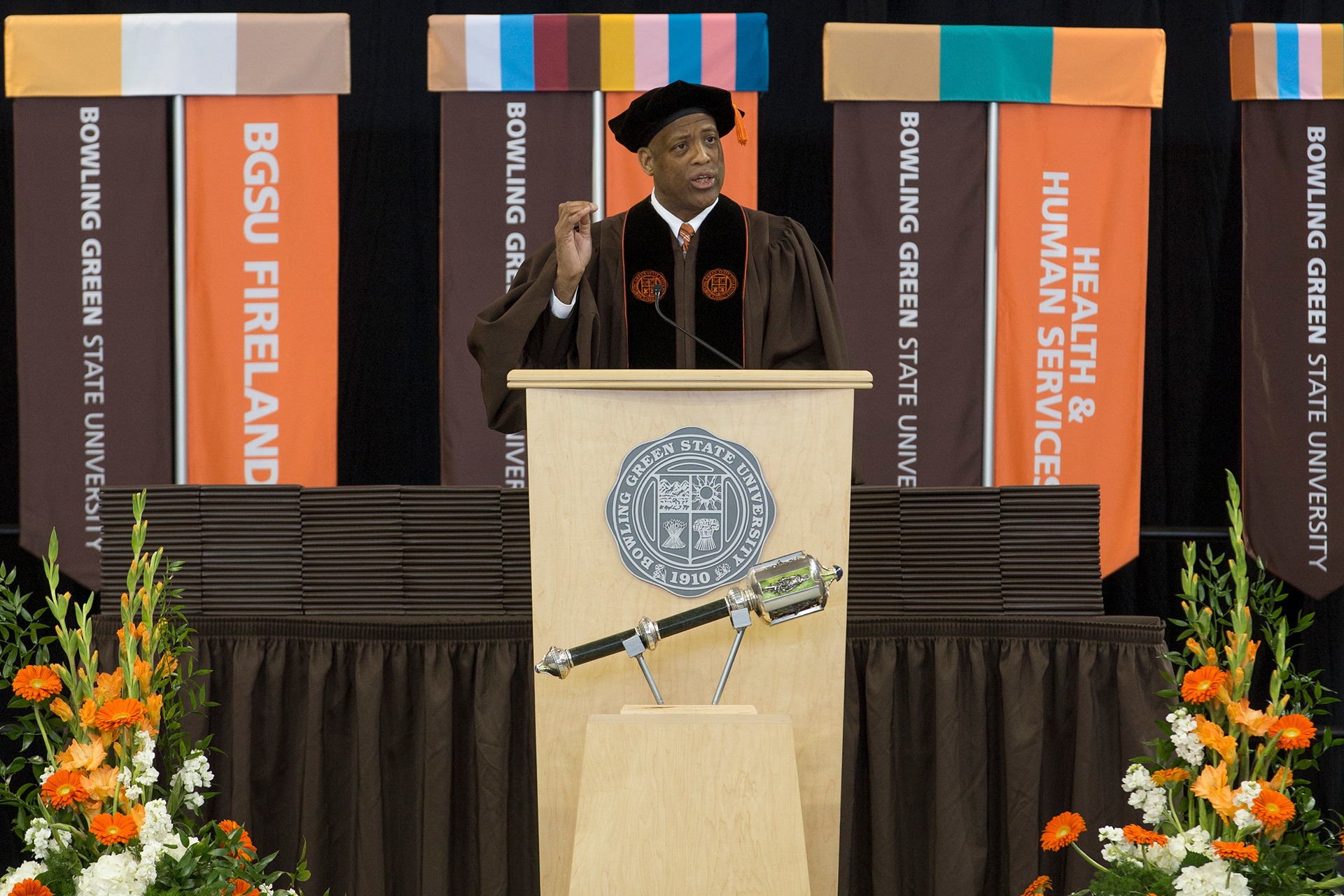 Mizell Stewart talks about the difference between a plan and reality 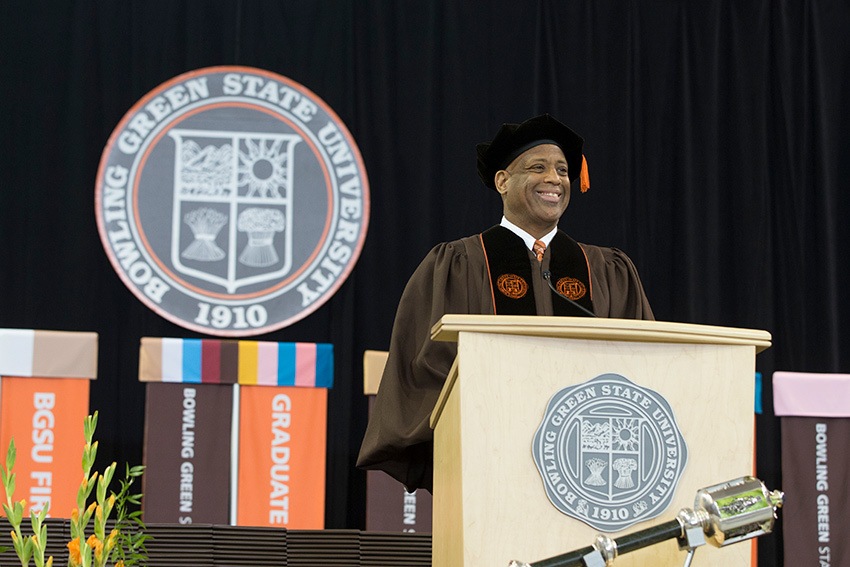 One of the pictures lifelong journalist and Bowling Green State University alumnus Mizell Stewart III keeps on his phone is a set of simple drawings depicting a person about to climb a mountain peak.

He described those drawings to candidates at the May 18 morning commencement ceremony:

“The image on the left depicts a stick figure ascending a straight, unbroken line from the base to the top, where a checkered flag rewards and recognizes success.

“It looks simple, straightforward and easy.

“That drawing is labeled ‘My Plan.’

“The image on the right is much different. The line is jagged and uneven, going up for a while and then back down again. The stick figure is still climbing.

“Closer to the top, there’s even a boat waiting to carry the stick figure across an alpine lake.

“Further along, there’s another stick figure waiting to reach out and to help the climber up.

“As in the first drawing, the reward is still there. The checkered flag is at the peak.

“But aside from the stick figure and what seems like the finish line, the journey depicted in the second drawing is very, very different.

“That drawing is labeled ‘Reality.’

“These drawings represent a simple, yet easily forgotten truth: Instead of an unbroken line to success, we will all experience peaks and valleys on the journey.”

Stewart knows about peaks and valleys and shared some of his valleys with candidates from the colleges of Arts and Sciences and Musical Arts.

“While a leader at student media here at BGSU, I was fired by one of my classmates in front of a room full of people. I started here as a freshman in the fall of 1983. I didn’t earn my degree for another 11 years. My grade point average was so low it was underwater. Now, by point of reference, my mom was a high school principal who was very, very serious about education. Chew on that for a second.”

Stewart has had a successful journalism career as an award-winning reporter, a top newsroom editor, a radio and television broadcaster and a corporate news executive, but it, too, had valleys. He said one of the most devastating points in his life occurred when, on the day he returned to work after his mother’s funeral, he was told that the news organization he led at the time was being sold to another company and that he would be out of a job in 30 days.

“Now, I know that many of you fought very hard to get here. I’ve had the opportunity to meet dozens of our scholarship recipients through my involvement with the Alumni Board,” he said. “Time and again, you demonstrate your perseverance and grit to tackle the struggle of college affordability. And it is scholarships, established by our alumni and friends, that signal our support of you and those students who come after you.

“[Yet] you weren’t [always] at your best in the classroom. You dealt with crazy family relationships. Some of you have health issues that will dog you long into the future. More than a few of you had people in your life who spent more time telling you what you can’t achieve — what you never will be — than what you can. Some of you are missing a parent or sibling who should be here with you to celebrate today. A couple of you, like me, made poor life choices. No one did it to you. You did it to yourself.

“I’d like to say to all of you that the completion of your degree may be less in spite of the obstacles you faced than it could be because of them. I’m not just talking about the obstacles you couldn’t control but the mistakes you made as well. Believe it or not, both are setting you up for your future success. That is because the trajectory of your life will be determined less by what happens to you and more about how you respond to whatever the world throws your way.”

Stewart then shared five things graduates can do when circumstances or mistakes send them down into the valley:

“In the end, I rebounded from my checkered academic past by finishing graduate school with a 4.0 and being named the best student in my cohort. Here’s to you, Mom.

“I wish you all great success in reaching your peaks – and, most importantly, a successful journey through your valleys.”