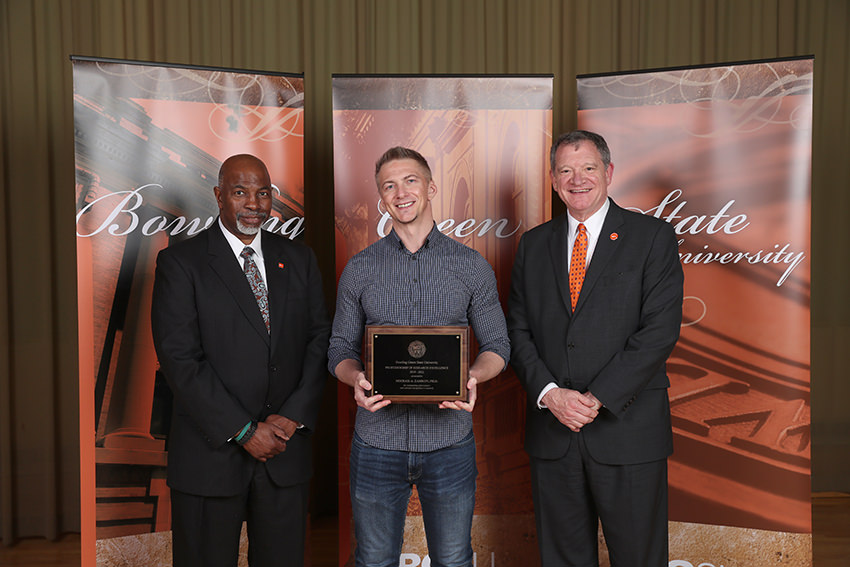 Dr. Mikhail Zamkov, a Bowling Green State University professor of physics and astronomy, is among an elite group of international researchers working in the field of nanocrystals, extremely minute particles that hold great potential for a wide variety of applications.

The University has chosen to recognize Zamkov and provide additional support for his work by naming him a 2019 Professor of Research Excellence. The title is conferred upon members of the faculty already holding the rank of professor and who have established outstanding national and international recognition through research and publication or creative/artistic achievement in their disciplines. The title is for a period of three years, with an annual stipend of $5,000 — a $3,000 salary stipend and $2,000 for professional development.

Zamkov’s lab focuses on synthesis and characterization of nanocrystals. His highly interdisciplinary research uses concepts and techniques from biology, chemistry, physics and engineering to achieve its goals. He has been referred to as “one of the world leaders in photophysics of optically active nanocrystals,” and his work has been praised by external supporters for its elegance, innovation and high quality.

He is extraordinarily productive, averaging five refereed journal articles a year in top-tier journals, along with a similar number of published conference proceedings and abstracts.

“In the rapidly moving field of nanomaterials, work that is not groundbreaking is quickly superseded and forgotten,” said his nominator Dr. John Laird, chair of the physics and astronomy department. By contrast, Zamkov’s work has had an enormous impact, especially for a mid-career scientist, as demonstrated by the high number of citations of his work and his high rating by the index used to indicate the overall value of the contribution of one’s research over time.

Zamkov’s publication on energy transfer in semiconductor nanocrystals in Science, a top journal in scientific research, was one of the most-cited articles on chemistry, in the top 1 percent, for a year. His research includes more than 75 peer-reviewed journals articles.

He has been granted one patent and has two more pending, “another indicator of the innovative nature of his work,” Laird said.

He also has an outstanding record of obtaining external funding, garnering more than $2.4 million and with four active grants, three from the National Science Foundation and one from the U.S. Department of Energy. These demonstrate the breadth and innovative nature of his work, Laird said. And in today’s era of reduced federal funding and increased competition, his success is even more remarkable, said Dr. Raymond Craig, dean of the College of Arts and Sciences.

Zamkov is held in high regard by his fellow scientists, Laird said. He has given 11 invited presentations at conferences in the last seven years, including national meetings of the American Chemical Society and international meetings of the Materials Research Society. Twice he has given talks at the prestigious Gordon Research Conferences, international conferences limited to select leading professionals in a given field. In addition, he has been asked to serve on seven grant approval review panels by the National Science Foundation and has served every year since 2010 on Department of Energy review panels for the prestigious CAREER grants.

He also paves the way for the next generation of photochemical scientists, taking on a heavy load of dissertation direction from his research lab team, and successfully bringing his doctoral students to completion of their degrees. His teaching and mentoring have been recognized with a Research Exemplar Award from Washington University.

“He sets a remarkable standard for other faculty in his department and in the Center for Photochemical Sciences,” Craig wrote.

Zamkov came to BGSU in 2007 after postdoctoral work at Kansas State University, from which he received his Ph.D. in physical chemistry, and the University of Illinois at Urbana-Champaign. He received his bachelor’s degree in theoretical condensed matter physics from Krasnoyarsk University in Russia.