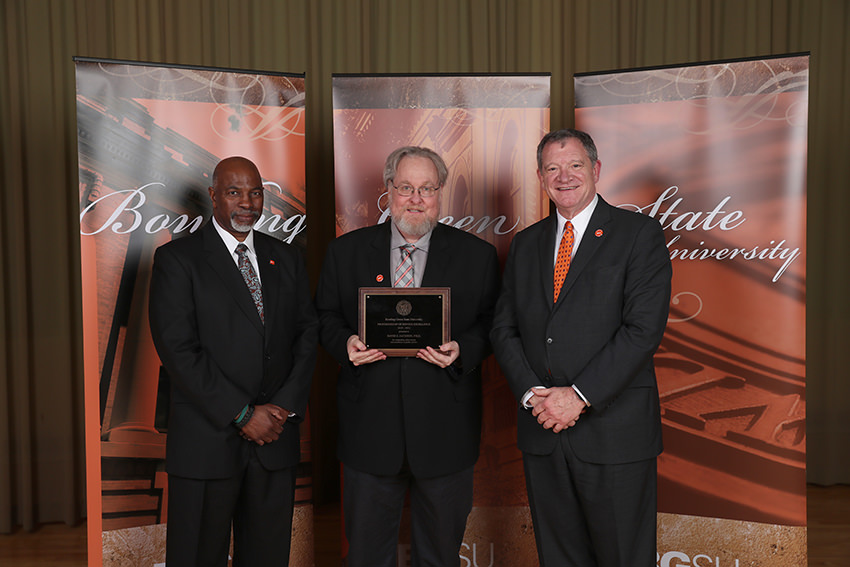 Dr. David Jackson wears many hats: political science professor, Bowling Green State University Faculty Association president, political expert. Through these roles, and others, Jackson has performed a wide range of service to the University, his profession and the community. As a result, he was granted a Professorship of Service Excellence at the annual Faculty Excellence Awards April 16.

The title is conferred upon members of the faculty who have established national and international recognition through professional service, public service and/or external engagement through their work at the University. The title is awarded for three years and includes an annual stipend of $5,000, $2,000 of which will go toward professional development.

In his nomination of Jackson for this award, Dr. Neal Jesse, political science Professor of Teaching Excellence, highlighted Jackson’s service to BGSU as president of the Faculty Association and his engagement with national media.

“Dr. Jackson provides an invaluable service to BGSU as president of the BGSU-FA. More than that, though, his position as president places him at the head of a large chapter of a national academic union, the American Association of University Professors,” Jesse wrote. “Thus, through two contracts, Dr. Jackson has been central to not only the cooperative relationship between faculty and administration on campus, but he has also engaged with the national organization and earned national recognition for his efforts.”

Jackson’s unique perspectives on U.S. politics have also earned him national and international recognition. His service has helped frame the emerging role of celebrity on political thought through a lens of academic research and civic responsibility.

“His work on celebrities and politics over the last decade and a half has led him to make multiple media appearances and contributions,” Jesse wrote, adding that this engagement includes American, British and Canadian media.

Highlights of these contributions include an op-ed in the Cleveland Plain Dealer, a more than 2,000-word article on his research in The Atlantic and appearances on the CBC, the BBC, the Australian Broadcasting Corporation and Iranian TV.

Dr. John Fischer, senior vice provost for Academic Affairs, expanded on Jackson’s service to the public, highlighting his “research-based engagement in the political sphere as an informed contributor to understanding important aspects of politics in the United States today.

“David Jackson has demonstrated well the ability to take his own research and make contributions to the public sphere; his work on celebrity was timely and his public speaking and general press citations have been quite relevant in recent political campaigns.”

In addition to these areas of service, Jackson is also known for his interest in Poland, including the Polish diaspora in the United States. He has written about the role of music in the creation and maintenance of the Polish-American identity and is host of the Sunday Morning Polka Show on WXUT, 88.3 FM. This interest led to a Fulbright Fellowship to teach for a semester at the University of Lodz in Poland. While there he taught U.S. Government, Media and Politics, and Canadian Government. He also studied the relationship between entertainment media use and political beliefs among young people. He wrote about the experience in his 2009 book, “Classrooms and Barrooms: An American in Poland,” published by Hamilton Books.

Jackson came to BGSU in 1997 as an adjunct instructor, advancing to professor in 2015.