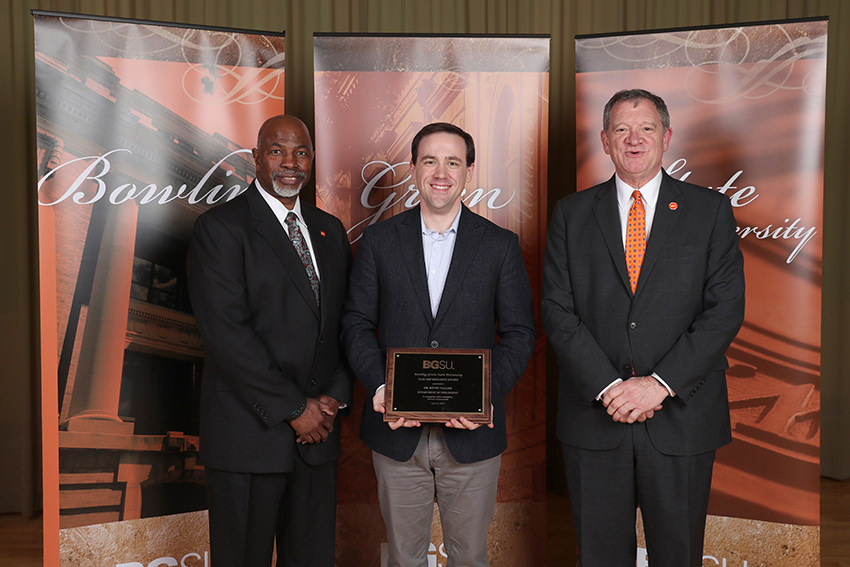 Dr. Kevin Vallier, associate professor of philosophy in the College of Arts and Sciences, has received an impressive amount of scholarly attention to his research on liberal political theory and political economy. Bowling Green State University recognized his work with the Olscamp Research Award at the Faculty Excellence Awards on April 16.

The Olscamp Research Award is given by the Office of Sponsored Programs and Research to a faculty member for exceptional scholarly or creative accomplishments. The honor includes a $2,000 cash prize and a reserved parking spot for a year.

From 2016 to 2018, Vallier published two books on the topic of liberal political theory, 13 peer-reviewed articles in leading journals, one peer-reviewed book chapter, a policy paper, two book reviews, two encyclopedia entries, and nearly 20 article drafts not yet published. In addition, he has two co-edited volumes with Dr. Michael Weber, chair of the Department of Philosophy.

His second book, “Must Politics Be War? Restoring Our Trust in the Open Society,” released in December 2018, was described by top political philosophers in his field as an important book on a topic of great significance and a must-read for philosophers and political theorists. A devoted researcher, “his view regarding the role of religious reasons in liberal politics is well-informed, original, and carefully argued,” wrote Dr. Robert Talisse, chair of the Vanderbilt University philosophy department.

“‘Must Politics be War?’ presents a new vision of how basic forms of social trust can sustain the individual rights that allow people with diverse moral and political views to flourish together in civil peace,” said Dr. Charles Larmore, W. Duncan MacMillan Family Professor of Philosophy at Brown University.  “Kevin Vallier has written a book that is as philosophically original as it is politically timely.”

“In this wide-ranging, deeply informed, and highly ambitious volume, Kevin Vallier returns to the convergence view of public reason and explores its potential for building moral and legal trust in liberal societies which are deeply divided about the good and the right,” wrote Dr. Paul Weithman, Glynn Family Honors Professor of Philosophy at the University of Notre Dame. “Vallier’s book lies at the cutting edge of public reason liberalism.”

Vallier has successfully secured a contract to publish a sequel to “Must Politics be War?” with Oxford University Press. The draft of the sequel, “Social Trust in a Polarized Age,” was described as “fantastic” by an Oxford referee. His present research focuses on questions concerning the ethics of citizenship, the role of religion in politics, the justification of rights, constitutional design, political stability and economic justice.

As the director of BGSU’s Philosophy, Politics, Economics and Law program (PPEL), Vallier has contributed to the creation of a PPEL major at BGSU, which today has about 50 student majors. The first of its kind at a major Ohio public university, it is in the process of attracting new students to BGSU. Since 2014, Vallier has raised a total of $1.7 million for the program through grants and fundraising. Those funds are distributed to the major program, as well as the minor program, the PPEL undergraduate academic club, event programming, networking and program support staff positions.

In the last three years, Vallier was awarded tenure by the University and promoted to associate professor. His first book, “Liberal Politics and Public Faith: Beyond Separation,” has received over 80 citations and has been reviewed in three prominent publications, including the flagship journal in his subfield, Ethics. He has also participated in numerous symposia and interviews regarding the book and its main arguments.

Vallier exemplifies the creative method of thinking that the Olscamp Award embodies.

“He has made a mark in the debate by giving full articulation to a kind of view that had been unexplored: a ‘public reason’ liberalism that is inclusive of religious reasons,” Talisse wrote in support of Vallier. “Although I think the view is not free of difficulties, there is no doubt that Vallier’s position will attract a good deal of attention within the part of the field that works on these issues.”