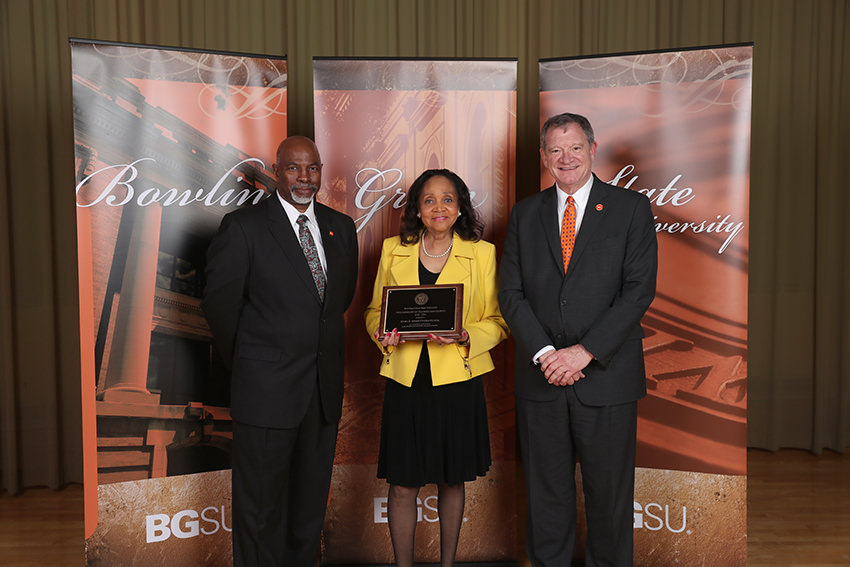 Professor Myra Merritt-Grant’s dual focus on vocal technique and conveying the character and message of text has successfully helped her mentor hundreds of vocal students since 1995. Her passionate approach to building confidence in performers and extra, late hours of vocal coaching for recitals and performances have earned her the title of Professor of Teaching Excellence.  Bowling Green State University bestowed the title upon her at the 2019 Faculty Excellence Awards on April 16.

The honor is designated for BGSU faculty members who hold the rank of full professor and whose extraordinary achievements as effective teachers in their discipline or in interdisciplinary fields deserve special recognition. Merritt-Grant will hold the title for three years and receive an annual stipend of $5,000, which includes $2,000 per year for professional development.

Merritt-Grant received her bachelor’s degree from the Peabody Conservatory of Music and her master’s from the Catholic University of America before making her Metropolitan Opera debut in 1982. As a full professor on the voice faculty in the Music Performance Studies Department at the College of Musical Arts, Merritt-Grant has used her deep knowledge of healthy singing techniques, repertoire and musical styles, languages and performance tradition to give her students a transformative learning experience. Her dedication to bringing out the artistry and musicianship in her students caught the eye of her nominator, Dr. Laura Melton, Department of Music Performance Studies chair.

“A large part of teaching excellence in music performance is building confidence in performers, and Ms. Merritt-Grant’s expertise in developing the careers of young singers does exactly that,” Melton wrote in her nomination letter. “In her 23 years in the College of Musical Arts, her students have won many competitions and awards including the National Opera Association Convention Vocal Competition and the National Association of Teachers of Singing (NATS) Competition,”

Merritt-Grant’s former student Tammie Bradley made her Metropolitan Opera debut in 2017 following her three-year residency in the Lindemann Young Artist Program. In 2018, Bradley was featured in the title role of “Aida” for the Opéra Nationale de Lorraine in Nancy, France. According to Melton, “These are monumental accomplishments in the field of teaching vocal performance, feats that a Juilliard professor would be proud of.”

Bradley learned how to be the soprano she is now and how to be a true lady under Merritt-Grant’s teachings at BGSU for two years.

“When I speak of a ‘true lady,’ I understand it to be a woman of class and grace, a woman who carries herself with respect and whose smile transforms you,” Bradley wrote. “Ms. Merritt, as I know her, is this woman.”

Bradley and Merritt-Grant worked together on a weekly basis during vocal lessons. Bradley said Merritt-Grant’s teaching style was personable, comical and used lots of imagery to help her understand the basics of vocal technique.

“One fond memory I have is when she was teaching me about vocal line, she would hand me a cloth and have me run the cloth along the top of the piano as I sang. This taught me that every phrase, sentence I sing should be smooth and uninterrupted,” Bradley said. “I have never forgotten that and I still use it to this day.”

On a local level, Merritt-Grant’s students regularly sing lead roles in BGSU opera productions and at the Toledo Opera, win prizes in the annual Conrad Art Song Competition and have performed in the northwest Ohio region in annual celebrations of Black History Month.

“Her dedication to her students and her craft changed my life. She is and has always been a consummate performer, and matching her example was my goal on a daily basis,” Dr. Minnita Daniel-Cox, assistant professor of voice at the University of Dayton, said. “My best friend and Merritt studio-mate, Lori Hicks, described Ms. Merritt as a ‘beacon’ and that is what she was for all of us.”

Merritt-Grant has judged National Competitions for NATS in Chicago and the Opera Guild of Dayton and has served her profession through the Hines-Lee Opera Program, an organization that discovers, encourages and promotes young classical singers in the Virginia, Maryland and Washington, D.C., areas. Her studio has hosted graduate students from high-ranking music schools such as Indiana University, Peabody Conservatory, the University of Michigan and the Eastman School of Music.

“She has served as an extraordinary role model to senior professionals, as well as an inspiration to developing singers at the start of their careers and emerging artists making their way in the world,” former BGSU graduate student Kisma Jordan Hunter wrote. “Indeed, I know of individuals, including myself, who selected to attend BGSU because of the example set by Myra Merritt.”