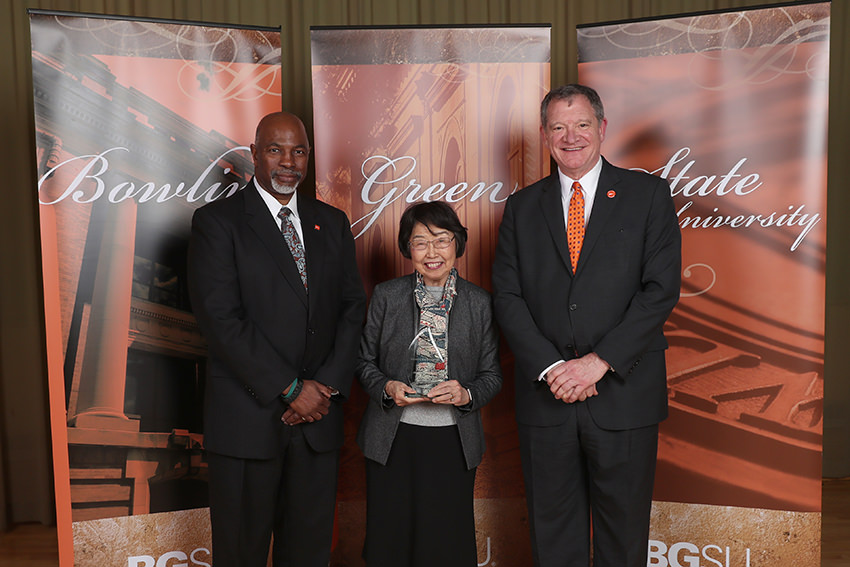 The name Akiko Kawano Jones has become synonymous with the Asian Studies Program at Bowling Green State University — but also with the qualities of selfless service, relationship building, teaching excellence and community outreach.

In recognition of her inexhaustible efforts in behalf of her students, the University and to creating understanding between the United States and Japan, the Faculty Senate named Kawano Jones a recipient of the 2019 Lifetime Achievement Award. The award recognizes a senior faculty member for outstanding contributions to BGSU over 20 years or more and who has made the University a more vital educational community. Recipients are widely acknowledged across campus for exceptional teaching, scholarly or creative work and service. Presented at the annual Faculty Excellence Awards on April 16, the honor also included a $1,000 prize.

Making BGSU a more vital educational community for students, faculty, staff and the community is part and parcel of what Kawano Jones does, said her many nominators for the award. She somehow manages to give what seems like her utmost energy to everything she does, whether it is teaching and nurturing her students or fostering BGSU relationships with businesses and other universities in Japan or organizing the popular annual Ohanami Cherry Blossom Festival for the community. Those who work with her marvel at not only the breadth but also the depth of her contributions to things she is passionate about.

She joined BGSU in 1983 to teach Japanese but soon expanded her efforts into a holistic immersion in the Japanese language as well as the culture, taking students on yearly trips to Japan, inviting them to her home for a half-day home stay to practice informal conversation, Japanese cooking, and the etiquette of visiting a Japanese home, and arranging internships for them with Japanese companies. In 2014, she established the Akiko Kawano Jones Study Abroad Scholarship to enable more students to study in Japan.

Her tireless devotion to her students earned her the 2018 Master Teacher Award, presented by the Student Alumni Ambassadors. Her teaching has also been recognized by external groups, such as her 2013 Teacher of the Year Award in the post-secondary category given by the American Association of Teachers of Japanese.

“She has led the program with exemplary dedication, energy and enthusiasm,” wrote Dr. Neil Englehart, chair of the Department of Political Science. “Akiko has a remarkable ability to inspire people to their best efforts.”

She founded the Japanese Club at BGSU, which builds community and provides a number of activities and events that allow students to take part in cultural activities and also to hone their organizing and professional development skills. In 2014, she founded the Korean Club.

“Under her leadership, the Asian Studies Program has grown from a program focusing primarily on Japanese studies to a dynamic program offering a wide range of curricular opportunities across disciplines to different regions of Asia,” wrote members of the Asian Studies Advisory Committee in nominating her for the award. “The program has a robust study-abroad program that offers students to study in Japan, China and Korea. In addition, she has developed internship opportunities for students in Ohio, Michigan and Japan.”

She has also assisted Japanese businesses locating in northwest Ohio and served on Ohio trade missions to Japan, activities that brought her the Japanese Foreign Minister’s Commendation in 2015. Mitsuhiro Wada, Consul General of Japan, presented the award from the Japanese foreign minister in recognition of her “outstanding efforts toward mutual understanding between Japan and the United States, with distinguished achievements which have contributed to Japan’s friendship and goodwill with other countries.”

She was one of a group of faculty who helped create a minor in Peace and Conflict Studies (PACS) at BGSU in 2008.

“She participated in developing curriculum that maintained strong links between PACS and Asian Studies, and she was instrumental in creating and supporting our partnership with Hiroshima Joaquin University and a bi-annual exchange program that allows our students to spend 10 days in Hiroshima, living with host families, interacting with HJU students, learning about all aspects of the atomic bomb, hearing survivor testimony and attending an annual commemoration on Aug. 6,” said Dr. Marc Simon, associate professor of political science.

She works closely with alumna Hiroko Nakamoto, a primary donor to the PACS program and supporter of Japanese-related cultural programs at BGSU, and helps with the Nakamoto Lecture Series.

Kawano Jones’ relationships with other alumni have brought cherry trees to the Bowling Green campus, scholarships for students and a BGSU Foundation account for the Asian Studies Program.

Her nominators noted her gentle but effective role in making things happen.

“She spends so much time to make sure things go right,” Simon said.