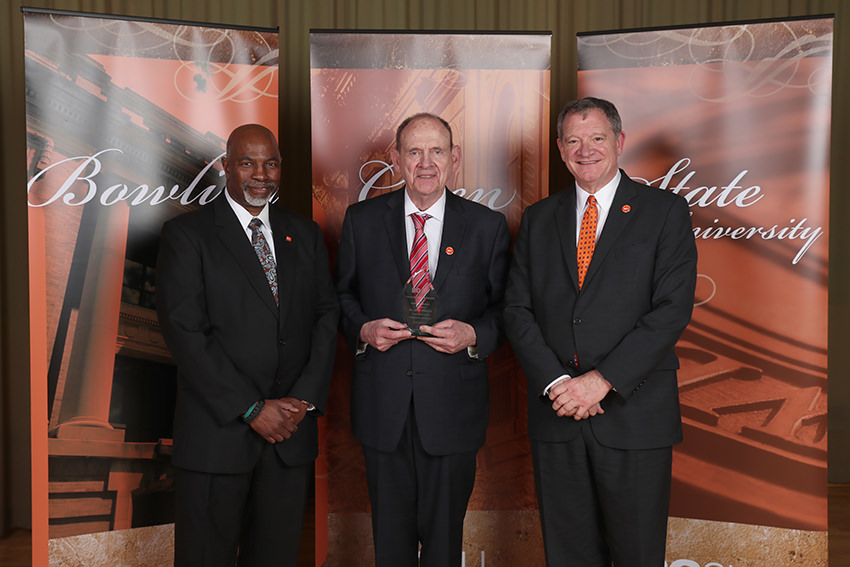 In his 46 years as a faculty member in the Bowling Green State University Department of Physics and Astronomy, Dr. Lewis Fulcher has made lasting and important contributions in all three areas of faculty life: teaching, research and service. On April 16, Faculty Senate honored his long and illustrious career by presenting him its Lifetime Achievement Award at the annual Faculty Excellence Awards.

The award recognizes a senior faculty member for outstanding contributions to BGSU over 20 years or more and who have made the University a more vital educational community. Recipients are widely acknowledged across campus for exceptional teaching, scholarly or creative work and service. The award comes with a $1,000 prize.

Fulcher received his Ph.D. from the University of Virginia in 1969 and was a postdoctoral fellow at the Goethe Universität in Frankfurt and at the University of Maryland before joining the BGSU faculty in 1973. He was promoted to full professor in 1988.

In the physics and astronomy department, his influence has been considerable, said nominator Dr. John Laird, department chair. He is a skilled and dedicated teacher who has guided thousands of students through the challenges of learning physics, and even students in his large-format entry level classes “praise his clear instruction and how apparent it is that he sincerely cares about them.”

He has also been an anchor in upper undergraduate and graduate instruction, in both shaping the curriculum over the decades and in regularly teaching some of the key courses.

“His impact on our majors and graduate students is obvious in their success, not only in subsequent courses but also after graduation,” Laird said. “Dr. Fulcher is the point of contact for many of our alumni and he is typically the first person they want to see when they visit.”

His record in research reveals an active and creative scientist, Laird said. He first established his international reputation in the field of quantum physics. He produced a steady stream of papers in Physical Review, the premier journal in physics, was tapped for a major review paper in Physics Reports and was invited to Germany and to Argonne National Laboratory for multiple extended visits.

He also wrote at the popular level for Scientific American and did work in geophysics, including a grant from Quaker State.

About 15 years ago, as the study of quantum physics evolved in a different direction, Fulcher changed course to study the human vocal system. Working with Distinguished Research Professor Ronald Scherer in communication sciences and disorders, Fulcher again made a significant impact, bringing his skills and knowledge in physics to the investigation of how sound is produced the vocal folds. He was invited to Erlangen, Germany, during his last faculty improvement leave to collaborate on this research.

In the area of service, Fulcher has contributed significantly to nearly every aspect of department activity, from governance to outreach, and also to the larger University and public communities, Laird said.

Within the department, he has served multiple times on every major committee and was vice chair for over 15 years. In 1981-82 he was asked to supervise the geophysics program. Over the years, he has also served on numerous University committees, notably the General Education Task force in 1979-81 that helped shape that part of BGSU’s curriculum for many years.

Unquestionably, Fulcher’s greatest service contribution has been in graduate education, Laird said. This includes more than 25 years on Graduate Council and, most significantly, serving as the department's master’s program coordinator since 1981, three-quarters of the program’s lifetime. As graduate coordinator, he is the point of contact for inquiries, does the initial review of all applications and individually advises every student in the program.

“No other individual has had as significant an impact on our graduate students or our program,” Laird said.