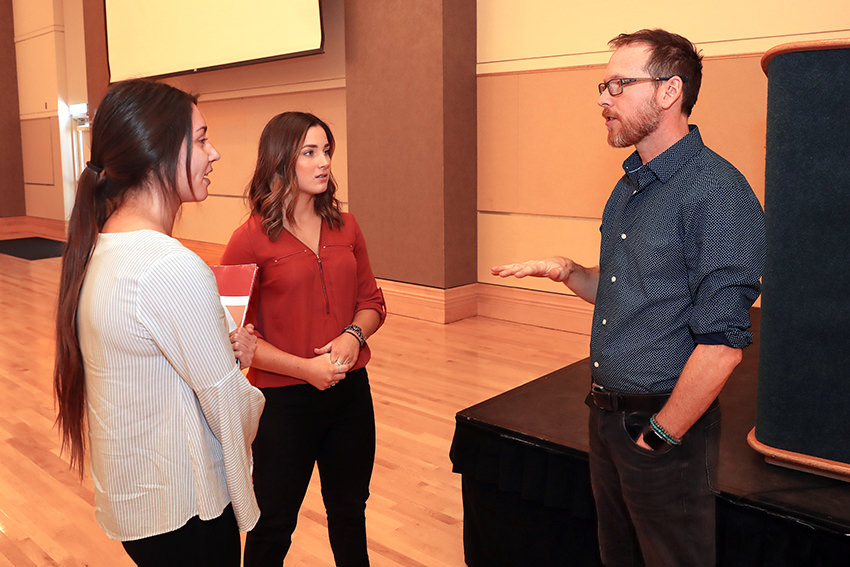 He recently offered his best career tips and tricks to students attending his keynote speech at the annual Media Career Day hosted by the School of Media and Communication. He said that it was ironic to come back after 23 years as a guest speaker for a keynote, since his career really started at an event like it.

Listening to the keynote speech of 1987 alumna Lisa Braun, former MTV marketing director, and asking her for an internship with MTV was an assertive moment for D’Aurelio. His MTV experience in Manhattan led him to Chicago, where he spent the first few years of his professional career working in radio promotions and on-air talent for Rock 103.5 and 97.9 The Loop. In addition to his current marketing position, He hosts a weekly four-hour show on Alt-Nation (Channel 36 on Sirius XM).  He said the hands-on skills he gained from working at WBGU-FM served him well after college, because the professional environment there was similar to the professional radio stations he later worked in.

“One of the things that I learned is when you’re in college, any professional in any industry will take your call, and will want to talk to you. Because at one point they were in your shoes,” D’Aurelio said during the luncheon portion of Media Career Day.

D’Aurelio stressed five distinct predictions and advice for students during his 30-minute speech, with references to “The Matrix” and his participation in the 1995 “jock strap run” WBGU-FM fundraiser. Summarizing the predictions at the conclusion of his PowerPoint presentation, he said, “Convergence will continue, remember that you are a valuable resource, work hard to stay outside of bubbles, remember that the matrix is just the beginning of technology and that we need your leadership.”

“Your life is going to be constant succession of opportunities to either do something or sit back in your bubble and stay comfortable,” D’Aurelio said. “Those that rise to the top always default to being assertive. Every moment counts: even before that day that I contacted Lisa Braun from MTV, there were many small moments of assertiveness that propelled me.”

He completed four internships before graduation and recommended that to stand out, students need to assert themselves and take advantage of the opportunities that are presented to them before they leave college. This advice stems from his personal experience of taking in all the tools BG had to offer and from contributing his time to WBGU-FM, BG24 News and SICSIC.

“Always default to saying yes to the things that will make you better. Don’t hesitate because you’re worried about what the masses will think.”

Self-motivation and “believing in yourself” were championed throughout his talk, as well as the idea of learning to adapt and understanding technology as it applies to media careers. He acknowledged that students taking an enticing gap year after graduation will have a difficult time job hunting, because the job market is filled with an abundance of people applying for the same jobs.

“When you are at school here you’ve got to do everything you can possibly imagine to open new doors and make new contacts, because as soon as you graduate those doors close.”

Gaining perspective is another crucial component to professional success, he said. During his freshman year, he thought that being a weatherman would be “awesome and funny, because it’s just standing in front of a green screen.” Instead, he was informed by his weather and climate class that being a weatherman was not that simple. He discovered that there is a great deal of math and calculations that happen before the green-screen reporting can take place.

As a former college student who was skeptical of the future of the internet, D’Aurelio has seen lots of technological advancements like the birth of smartphones and tablets that have altered the course of his career. He advised students to maximize their ability to teach older employees new technology, because it makes their input invaluable to media organizations.

“If there was anything that I have learned, it’s that you have to put in the time and you have to get the experience, so that you can handle things when they take a turn for the worse, as opposed to just managing the good times.”