Hall’s photos commemorate efforts to care for the needy 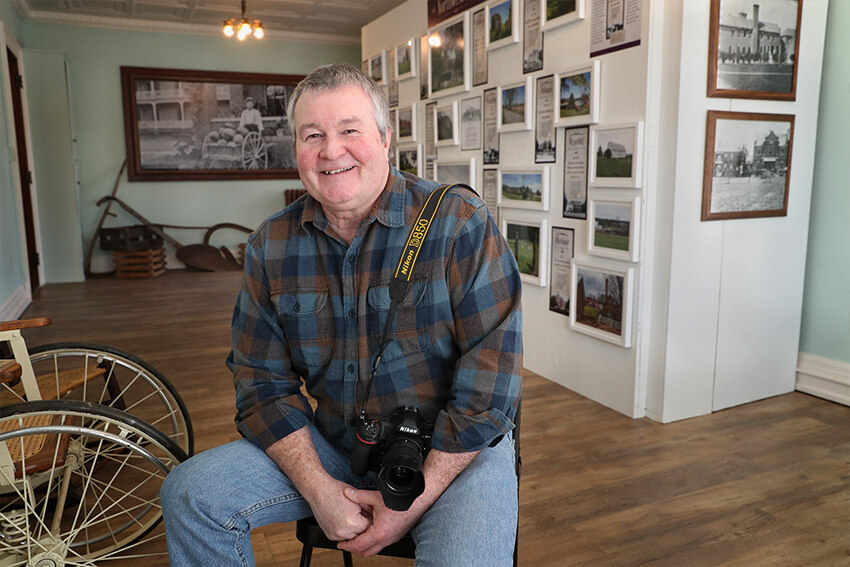 Jeff Hall had never considered himself much of a history buff. But when he agreed to be part of a major project for the Wood County Historical Center and Museum, he found himself stepping back in time as he explored the towns, back roads and byways of each of Ohio’s 88 counties, in search of their “poor farms.”

Hall, a photographer and senior lecturer in Bowling Green State University’s Visual Communication Technology program, was enlisted about a year and a half ago by the museum to locate and photograph whatever remained of the state’s poor farms. The images are part of the museum’s 2019 theme exhibit, “For Comfort and Convenience: Public Charity in Ohio by Way of the Poor Farm,” which opened Feb. 1. It coincides with the 150th anniversary of the Wood County poor farm (later known as the infirmary and then the county home), and features 120 of Hall’s photos, along with an extensive interpretive exhibit about the Ohio Board of Charities’ efforts to help counties care for needy citizens.

Hall will share his adventures photographing for the exhibit with visitors during the grand opening event from 5-8 p.m. Feb. 22. The museum will also erect a monument in its “paupers cemetery” with all the names it can document of who is buried there.  The monument will be dedicated April 6.

“For Comfort and Convenience” pays homage to all the poor, ill and disabled members of society who found shelter in these county havens by documenting them and sharing their story with the public, Hall said. He had become interested in collaborating with the museum after talking with Hartlerode and then-Marketing and Events Coordinator Kelli Kling (now the museum director) in 2013 at the museum’s exhibit of photographer Christopher Payne’s “Asylum: Inside the Closed World of State Mental Hospitals.”

The Wood County Historical Center and Museum is housed in the county’s former infirmary building, and is fortunate to have most of its buildings and many of its records intact. But thinking about the rest of the state, the museum staff wondered, “What’s become of all these?” Hall said.

The museum decided to include all the counties “to show that Wood County doesn’t exist in a bubble,” said Curator Holly Hartlerode, the interpretive director for the project, who has spent the last two years in research. “We made an effort to work with the other counties and we want to serve as an expert resource for them.”

Learning about the realities of life that led people to the poor farms and tracking the farms down was a sobering experience for Hall, whose travel was funded by an Ohio Arts Council grant.

Facilities’ existing records detail the residents’ names, ages, why they came, and their condition when admitted. Generally, children were not supposed to be housed in the poorhouses but sometimes were when parents could not care for them and their counties could not afford to build orphanages. Some records show mothers dropping them off, sometimes returning to retrieve them as they could. In Wood County, a number of residents were eastern European men who emigrated to Ohio to find work and had no relatives here to help them as they aged or became disabled.

All able-bodied residents were expected to work so as not to be more of a burden on the taxpayers, Hall said.

“The poor farms raised crops and cattle, they had slaughterhouses and were meant to be self-sufficient.”

Originally the facilities cared not only for the poor but also those with physical and mental illnesses. The Wood County Historical Center, for example, comprises an asylum alongside the infirmary, as recommended by the State Board of Charities. Caring for so many different types of people presented a great challenge for the superintendents and matrons, who were not equipped to deal with everyone’s special needs, Hartlerode said, and “by 1919 there was this big push by the state to provide mental hospitals and orphanages to serve different groups. Many of the poor farm infirmaries became the ‘county home’ for the elderly,” some of which still function as nursing homes.

In several cases, Hall reached the historic sites just ahead of the wrecking ball. 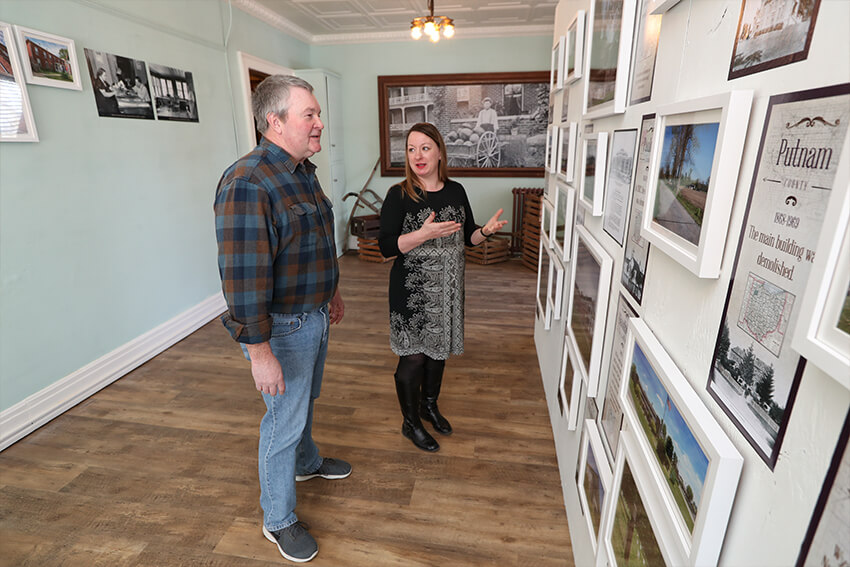 Jeff Hall points out a photo of the site of a former county poor farm.

“So much is going to be gone,” he said. “Just in the brief time I’ve been involved in the project, at least one poorhouse has gone from having residents in it to being torn down. In Columbiana County, I photographed a house that was being demolished. Several others are scheduled for demolition and some are already gone.”

Finding them was easier said than done, he found.

“It took a tremendous amount of research and tracking down of all these places,” he said. “When I started, I thought, ‘88 counties, that’s not too bad.’ But it turned out that Wood County is not the norm.”

He had to become an explorer and a bit of a detective, pursuing leads, questioning local people and in many cases, tramping through overgrown fields and looking carefully at the ground for signs of gravesites when there was no structure standing.

Because the land the poorhouses and farms were on was county-owned, where the property is not still being used as county homes, the land has often has been repurposed for other county facilities such as sheriff’s offices, libraries, community colleges and even, in one case, the dog pound, Hall found. Some has been sold off and is now the site of strip malls or soybean fields.

“In some counties, we knew roughly where it was at, but I had to approach people, sometimes in their homes, to ask who knew the exact location. In Noble County, I knocked on the door of a house and a woman answered. She said, ‘Yes, it’s here,’ and I followed her to her side yard. She began digging away at the dirt and there was a gravestone lying flush with the ground.

“In Adams County, there’s now a house that’s being lived in on the former poor farm, and it’s private property now, but they took me down to a field and had to keep some cows and a pretty nasty bull away from me while I looked for the cemetery in a stand of trees. The stones were there but they were all tipped over and piled in a heap under the trees.

“At a community college I asked the librarian and she took me across the lawn to an area where we could see the indentations of old graves. She said, ‘We’ll never dig to build here, but this is all that’s left of it.’”

The project was also a lesson in Ohio geography for the photographer. Hall was very taken by the extreme variations in topography and scenery around the state and by the differences in population density.

“BGSU has a bigger enrollment than some counties’ population,” he said. And although the very flat Wood County is laid out on a grid of straight roads, the hillier parts of Ohio added miles to the journey, but often beautiful views as well. In the most rural parts of the state, he followed his GPS down roads that sometimes were little more than gravel tracks.

Wood County’s facility was part of the Ohio Board of Charities’ effort to care for the elderly and poor. Before 1831, when the Ohio General Assembly said that each county should put aside money to provide “indoor relief” — a home and infirmary for the poor — it was up to individual communities to care for their poor, Hartlerode said. People could receive temporary “outdoor relief” of financial help with medical bills, food and clothing. In 1831, counties began to purchase tracts of land for poor farms. The state became part of a national movement promoted by nurse Dorthea Dix after seeing England’s system of caring for its poor. Ohio’s was viewed as a well-managed system, Hartlerode’s research showed.

Edwin Farmer, the Wood County Infirmary’s superintendent, built the new building for mentally ill residents. The state’s longest-serving poor farm administrator, he was involved with the Ohio Board of Charities. He was succeeded by his son-in-law, Frank Brandenberry, who had served as Farmer’s assistant and later married his daughter, Lottie. The Brandenberrys served as superintendent and matron from 1904-49.

“For Comfort and Convenience” is an inspirational exhibit that demonstrates Ohio’s efforts to provide care for its citizens.