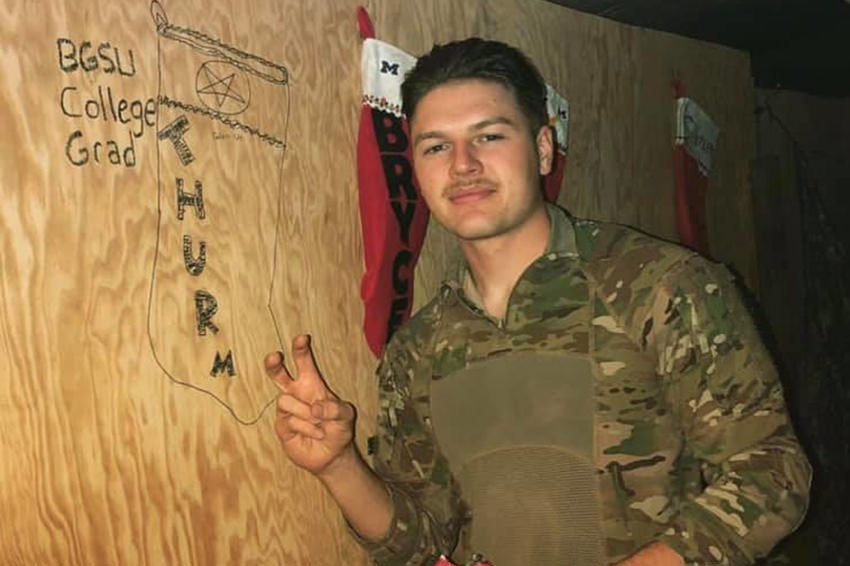 Thurman Dieter didn’t get a chance to walk across the Stroh Center stage in December to receive his diploma with his Bowling Green State University classmates. Instead, he watched his graduation ceremony on the web from a tent while deployed in Syria.

Dieter has been in the Army Reserve for the past six years and recently re-enlisted for another three years. Over the past 10 months, he has been deployed to multiple destinations in the Middle East, including Kuwait, Iraq and Syria.

He began enrolled at the University in spring 2014, and graduated with a Bachelor of Science in Individualized Studies from the College of Business.

"It was a relief to complete my degree while on deployment in an undisclosed, remote combat zone," Dieter said. "My goal was to finish before the end of the deployment, allowing myself to solely focus on landing a job this spring," he said. "It’s been a wild ride that started in Olscamp Hall and ended in a tent in Syria.

Dieter knew about his deployment in Fall of 2017. He reached out to his adviser, Dr. Tim Chambers, and discussed the possibility of taking courses online while deployed overseas.

"He ultimately laid out a game plan of 10 courses I’d have to take overseas," Dieter said. "I was able to contact professors as the semester began to explain my situation, which I thought could be problematic. Fortunately, they were extremely helpful and even allowed me to work at my own pace in some situations."

Dieter then left for his deployment in March of 2018. Due to the nature of the deployment, some due dates had to be flexible for Dieter.

"All of my professors understood my unique situation, which kept me from stressing over assignments as we would be days without connection due to missions," he said. "I appreciate their cooperation very much."

Dieter’s diploma will be waiting for him back in the States, while visits family and friends around the country on his way back home.

"The deployment has been a great experience for me," he said. "I’ve been able to take in the so many cultures while being able to proudly serve my country," he said. "I never thought I’d join the ranks of my family members who have served overseas, but that’s just how it happened to play out."

Along with his two brothers who have also graduated from BGSU, Dieter is pleased to complete his degree at the same university.

"I’m excited about completing the business program at BGSU, knowing the prestige that comes along with it as I look to begin my civilian career," he said.

Dieter said he is thankful for everything his parents did for him while he attended BGSU during his deployment.

"Their sacrifices haven’t gone unnoticed," he said. "I’ve always been able to find the motivation to accomplish my goals because I have them to look up to."