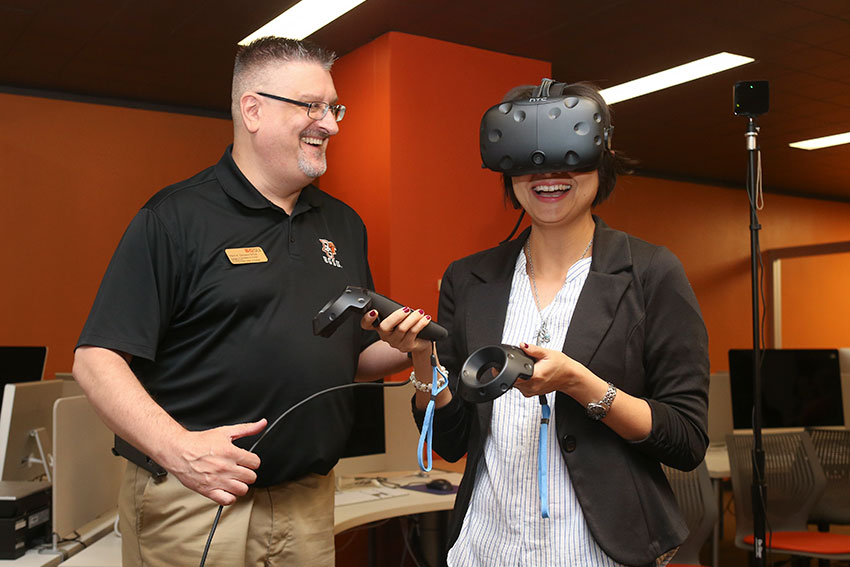 Imagine you are back in your seventh-grade history classroom, learning about the tomb of King Tutankhamun. You look at your textbook and see a small, outdated picture or two of part of the site, and then a short description that ultimately doesn’t tell, or show, very much at all.

Now imagine if you could actually go to King Tut’s tomb and explore it for yourself, complete with dark lighting, eerie music, an explorative environment and information points throughout the tomb that tell and show you more than your textbook ever could.

This is just one of many games that Mark Stevens from the BGSU’s College of Education and Human Development (EDHD) uses to demonstrate the uses of virtual reality (VR) technology, and one that he hopes to implement in K-12 school in the future. While it is next to impossible for students to see wonders of the world such as King Tut’s tomb in person, with Stevens’s use of VR, they would be able to explore a lifelike, realistically detailed version of it without ever leaving their classroom.

Stevens, an alumnus of BGSU’s master’s program in classroom technology and instruction design, is a full-time education technology instructor in EDHD, and he has a passion for not only emerging technologies, but also exposing his students to them.  At BGSU, he creates immersive learning environments through virtual world creation — the same effect he hopes to achieve in school classrooms through VR. His BGSU students, all of whom are studying to become teachers, work with him to help develop the best ways to implement learning techniques into the VR games.

Additionally, Stevens has worked closely with Foundry 10, a Seattle-based company whose mission is to better understand the way children and teens learn, with an approach that includes research, action and community to expand the way people think about learning.

“They were doing research with students, and I asked, ‘Well, what about the teachers?’” Stevens said. “They said that they hadn’t really given that much thought. You never know when a new technology is going to become commonplace or be adopted by K-12 schools, and when it does, both students and future teachers need to know how to use it.”

Now, Stevens is working with nearly 300 educators in EDHD and exposing them to VR. To bring both faculty and students together to explore the development of VR, he uses the Collab Lab at BGSU’s Jerome Library. He is holding weekly meetings in the Collab Lab for anyone who is interested in exploring virtual reality as educational technology, and hopes to attract a number of participants.

“Having the Collab Lab adds a way for faculty to work together in a more structured environment in a shared space, instead of having to pack into someone’s office,” said Stevens. “And having the Collab Lab act as the intermediary helps us find collaborators in other areas, since we tend to otherwise work within our own silos.”

Stevens also holds weekly meetings in the Collab Lab for anyone who is interested in exploring virtual reality as educational technology. While he mainly works with students from EDHD, Stevens also works to draw in students from all majors and fields.

“If you think about it, there’s something for everyone in VR with every major on campus,” Stevens explained. “You need the game designers, but also artists, writers, musicians and content creators. And we have them all here at BGSU. It’s about creating a game, but it’s also about bringing people in together from all the colleges to gain experience in their fields.”

However, one thing you don’t see a lot of is VR in schools. But with more technology becoming steadily more affordable, it has become increasingly realistic for VR to be adopted by schools, which is exactly what Stevens wants to see in the future.

Stevens has argued that VR can help students learn more through experiential learning, and with the games he is developing, he hopes they will be able to get more out of school and learning while gaining new experiences.

“That’s why schools have field trips, after all — to give a ‘being there’ experience. That’s what we’re hoping to implement with this technology.”

If VR can be offered in this way, it will give students a better alternative than just their textbooks and can be viably used in a classroom environment.

In addition to the game that allows students to explore King Tut’s tomb, Stevens has been developing a wide variety of other learning games, each which focuses on a different field of study. For example, there is a puzzle game where you can design a maze and navigate a mouse through it, teaching critical-thinking skills and the basics of implementing an experiment.

In addition to his work with VR, Stevens has previously explored game-based learning and ways to use the popular game Minecraft as a teaching tool. Two years ago, he piloted a program in which BGSU education majors used the game to deliver curriculum to students in a K-12 setting to determine if game-based learning can effectively deliver the same knowledge as traditional methods.

The work with VR goes above and beyond regular classwork, with students in EDHD participating on a voluntary basis in addition to their respective classes. As a result, the work can be slow, but Stevens as well as all the students involved with this project are steadily making progress, and Stevens is open to broader collaboration.

“This technology is emerging, and we’re currently at the front of the wave,” Stevens said. “With this work, we’re hoping to put BGSU on the map as a leading school with VR. Technology isn’t going away, and if you can find a way to utilize it, you can help benefit yourself and others in your line of work.”