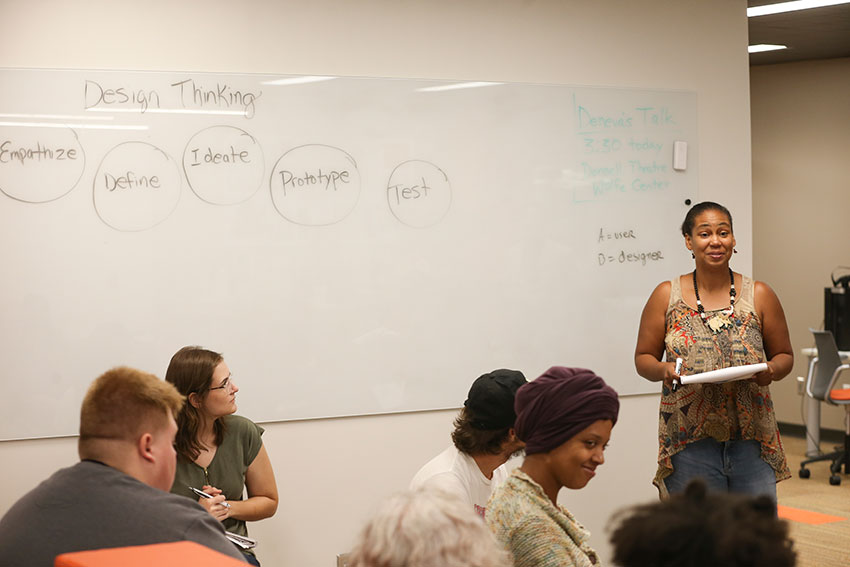 Have an idea? Bowling Green State University’s new Collab Lab is “the place to get it out of your head and into something tangible,” said director Dr. Jerry Schnepp, who is also an assistant professor in the College of Technology, Architecture and Applied Engineering. High tech, low tech and even no tech — the results come from the creative input of diverse minds, experience and expertise in a process guided by the principals of Design Thinking.

While continuing to provide all the services as its former incarnation as the Student Technology Assistance Center (including free 3-D printing), the new, walk-in resource on the first floor of Jerome Library offers expanded and expansive opportunities for collaboration among faculty and staff who either have an idea they would like to explore or a problem they need to solve.

“We’re here to foster collaboration among faculty, staff, students and community members,” Schnepp said. “Just having smart people is not enough. You need cross-disciplinary input. We’re here to help develop ideas and get them to the place where you can share them with others.”

“It came at the perfect time for me,” said Dr. Mark Stevens, who teaches technology integration in the School of Teaching and Learning in the College of Education and Human Development.

Stevens has been employing the video game “Minecraft” in his classes for students majoring in middle childhood and high school education, but now is moving into the more cutting-edge and possibly more exciting area of virtual reality as a teaching tool. And beyond that, he would ultimately like for BGSU to be able to produce its own VR content, which would require the participation and talents of faculty and students from a number of disciplines.

“Having the Collab Lab adds a way for faculty to work together in a more structured environment in a shared space, instead of having to pack into someone’s office,” said Stevens, who gave demonstrations of his Collab Lab work during the lab’s recent open house. “And having Jerry to act as the intermediary helps us find collaborators in other areas, since we tend to work within our own silos.”

Schnepp has presented a workshop on Design Thinking for students working with Stevens, who is holding weekly meetings in the Collab Lab for anyone who is interested in exploring virtual reality as educational technology. He hopes to attract a number of participants.

“With Jerry helming the lab and the availability of computers and software there, we can coordinate it much more effectively,” Stevens said.

An addition to being the locus for specific projects, the lab hosts monthly “future-casting” sessions, in which there might be a speaker or a screening of a TED Talk, which spark discussion and debate that could inspire new ideas and innovations. It also serves as the site for other related workshops and talks.

The physical space reflects the lab’s philosophy of sharing. The large, open room has no interior walls and is arranged into a variety of comfortable seating areas — one living-room style, another around a conference table, another with rolling chairs around a small table — all focused on white boards where ideas can be recorded and shared, and anyone walking through the space can see what’s going on and possibly chime in.

Cans of Play-Doh®, markers and books on Design Thinking are within reach to help ideas be expressed.

And, unlike traditional library environments, “There’s no ‘shushing’ here,” Schnepp said. People are free to talk and interact as they bring their creative ideas and their particular knowledge to a variety of cases.

A project could be a product, service or even a social innovation. Although the lab boasts a wide array of technology, including 3-D printers, a laser cutter, virtual reality headsets and video production stations, “it’s not a maker space, it’s an idea accelerator,” Schnepp said.

The set-up of the room was very intentional and carefully thought out to encourage maximum communication, Schnepp said. When Dr. Mike Ogawa, vice president for research and economic engagement, proposed that BGSU create a dedicated space for collaboration and innovation, he, Schnepp and Sara Bushong, dean of the University Libraries, spent about a year and a half researching the idea. They visited a number of institutions that had such facilities, including Harvard University, MIT and several private companies, observing, asking advice and hearing about their experiences.

“We didn’t just copy. We saw what they had and asked them what they would do differently if they were to do it again so we could get the best information,” Schnepp said.

The team found that openness was a common denominator. Even a company that is dealing in proprietary intellectual property maintains the open concept in the belief that the benefit of cross-pollination of ideas outweighs any loss of ownership of ideas.

Along with Schnepp, the staff includes a number of “Design Thinkers,” graduate students who have learned the principals of the process invented by the Stanford University School of Design and now employed by such firms as IDEO, inventors of such items as the Swiffer mop and a specialized suture gun for surgeons.

“It’s very important to be cognizant of where you are in this process,” Schnepp said. “People often begin with the ‘Define’ step before they have really empathized to understand the ‘pain points’ they are trying to address. It’s user-centered design.”

As an expert in human-computer interaction, which involves psychology, art and technology, Schnepp is used to taking a multi-pronged approach to problem solving, and said many people employ this type of thinking without realizing it. It can be used in everyday life, as outlined by one of his favorite books in the Collab Lab collection, “The Achievement Habit: Stop Wishing, Start Doing,” by Bernard Roth.

He and the Design Thinkers have worked with the library to apply Design Thinking to how to raise awareness about the library among students, and with the Center for Community and Civic Engagement for social issues such as increasing voter engagement.