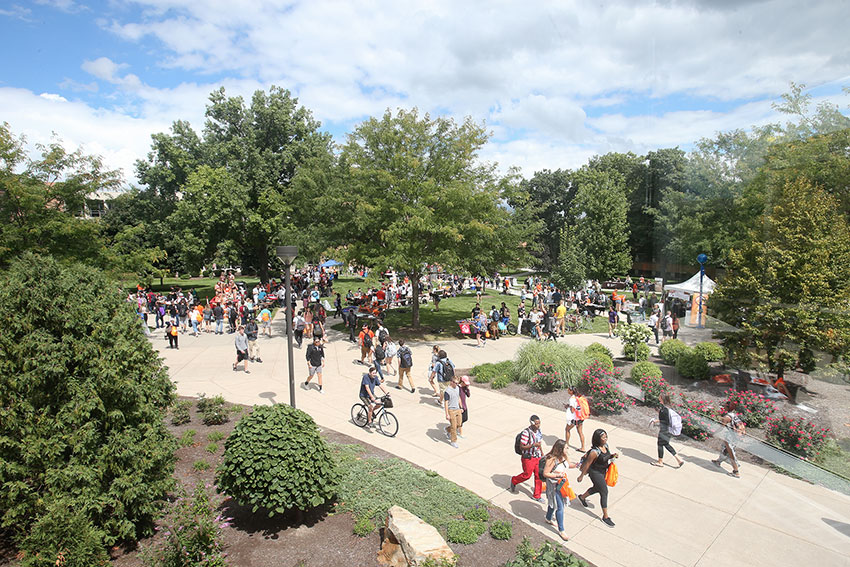 The interior campus sidewalks will be lit with LED lights thanks to the Student Green Initiatives Fund.
Tweet

By next summer, faculty, staff and students may notice something a little different about the heart of campus – especially at night. Thanks to funding from the Student Green Initiatives Fund, phase 1 of the LED lighting project is set to begin later this fall. The $254,000 award is the largest in the seven-year history of the fund.

The Green Fund Committee approved the proposal at its April meeting, noting that it was consistent with Bowling Green State University’s sustainability goals. The project’s aim of reducing greenhouse gas emissions aligns with BGSU’s Climate Action Plan, created in connection with the institution’s membership in the Climate Leadership Network.

“This is the largest single project ever funded by the Student Green Initiatives Fund,” said Sustainability Manager Nicholas Hennessy in the Office of Campus Sustainability. “It was a compelling proposal, both in terms of monetary savings and cutting down on emissions.”

The first phase of a four-phase project will focus on pedestrian lighting along the inner sidewalks in the heart of campus, around the Bowen-Thompson Student Union and Moseley, University and Olscamp halls. This portion of the project is expected to have the biggest impact on students.

“That’s the ultimate purpose of the fund: providing assistance so the University can invest in technology significantly faster than otherwise possible,” he said, adding that the committee has voted to pledge $500,000 toward on-campus solar initiatives.

Hennessy added, “This shows the student interest, commitment and excitement for bringing solar to campus.”

Because of its impact on emissions, the lighting project is eligible for a monetary rebate through the city of Bowling Green and Efficiency Smart. All four phases of the project will be paid for within eight years, after which time the University will see pure savings. Construction is expected to start in February and move fairly quickly.

The Student Green Initiatives Fund is a pool of money available to fund projects that further environmental sustainability on campus. It is funded by an opt-out $5 per semester fee and is only accessible to current undergraduate and graduate students. Funded projects must align with one of three categories: emissions reduction, waste reduction and conservation or education, outreach and awareness.