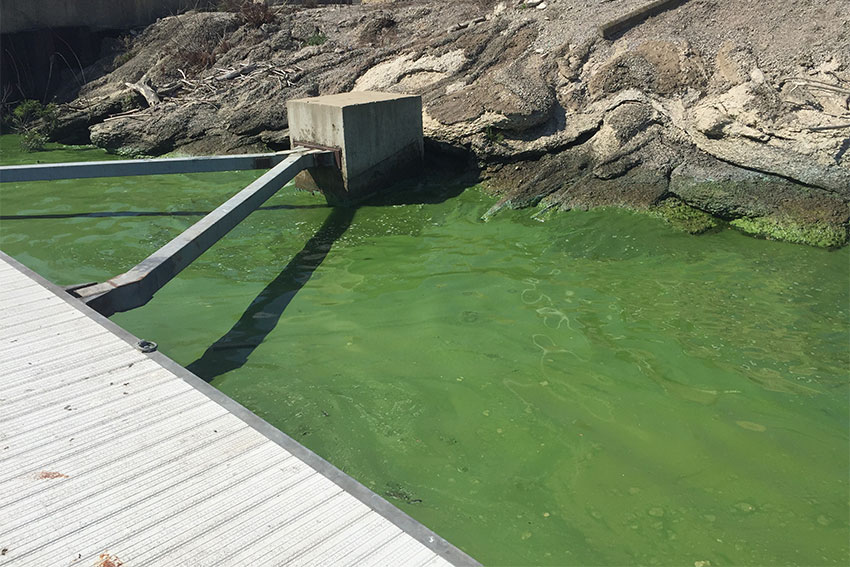 In late September, during an unusual heat wave, Toledoans became alarmed when the Maumee River turned a deep green, like a velvet ribbon snaking its way northeast to Lake Erie. The potentially toxic cyanobacterial bloom causing the murky discoloration, commonly referred to as blue-green algae, was also unusual in that these blooms typically occur in the lake and not the river, except for in spring and early summer. Memories of a toxic cyanobacterial bloom in 2014 that caused a water emergency in Toledo stirred concern for the area’s drinking water supply, and several municipal public water systems, including Napoleon, Bowling Green and Defiance, and food service industries such as the Campbell Soup Co. in Napoleon that use the Maumee River as a water source reached out for data on bloom conditions.

Bowling Green State University biologists swiftly created a plan to identify and quantify the cyanotoxins — toxins produced by cyanobacteria — as well as genetically quantify the potentially toxic cyanobacteria in this bloom to assess its risk to the regional water treatment plants and industries. Working with a team of collaborators from the University of Toledo, the State University of New York College of Environmental Science and Forestry, the Ohio Environmental Protection Agency (EPA) and Defiance College, they drafted a Rapid Response Proposal and received funding from the National Centers for Coastal Ocean Science, a division of the National Oceanic and Atmospheric Administration, to collect samples and conduct the analyses.

Leading the project was Dr. Timothy Davis, a new faculty member at BGSU but a longtime collaborator of Drs. Michael McKay, the Ryan Professor of Biological Sciences, and George Bullerjahn, Professor of Research Excellence. They and their colleagues on the Maumee River response have studied the algae situation in Lake Erie, including Sandusky Bay, for many years and were well positioned to divide up the necessary tasks, such as sampling and analysis.

For three days, beginning on Sept. 25, BGSU, UT and Defiance College sampled 16 sites spanning the length of the Maumee River through Ohio from the Indiana border. Water was collected from each site and immediately processed for cyanotoxin quantification and genetic analysis. The team then provided information to the Ohio EPA to share with municipality and water quality managers on the types and quantities of cyanotoxins present so that, with more hot, dry weather predicted, they would have the necessary information in case of a resurgence.

“Our analysis of the blooms showed there were microcystins (a cyanobacterial toxin) present, which we expected, and they could have caused a ‘do not drink’ advisory had they exceeded the threshold allowed by the Ohio EPA, but luckily no alerts were needed,” Davis said. “The bloom also had the genetic potential to produce saxitoxins, a neurotoxin that can cause Paralytic Shellfish Poisoning. Luckily, though the genetic potential was there, saxitoxins were not detected.”

The bloom event was of great interest to the scientists because of another unusual aspect, Davis said. It consisted of two different cyanobacteria: Planktothrix, which typically thrive in the shallower, turbid waters of Sandusky Bay and the Maumee River and can tolerate lower light conditions, and Microcystis, which prefer the calmer and more limpid open-water conditions in Lake Erie. Planktothrix was the dominant cyanobacterium in the Upper Maumee, but as the river moved toward the lake, Microcystis became more dominant. The unusually hot, dry weather undoubtedly played a role in this, Davis said.

“Because of the low flow, the river acted like a lake at that time,” he said. “Its temperature also increased by several degrees Celsius, which the cyanobacteria like.”

Both Planktothrix and Microcystis have strains that can produce toxic microcystins, further raising concern. Davis and the team were eager to see the DNA analysis to learn whether the Microcystis colonies that were dominating the downstream portion of the bloom were genetically similar to the Microcystis strains in the open waters of Lake Erie or if they were a distinct population.

Once all the genetic analysis is done, the team will share it in a scientific publication.

Toxic algae is a worldwide problem. “With each new occurrence, we learn more about the overall ecology of the bloom,” Davis said.