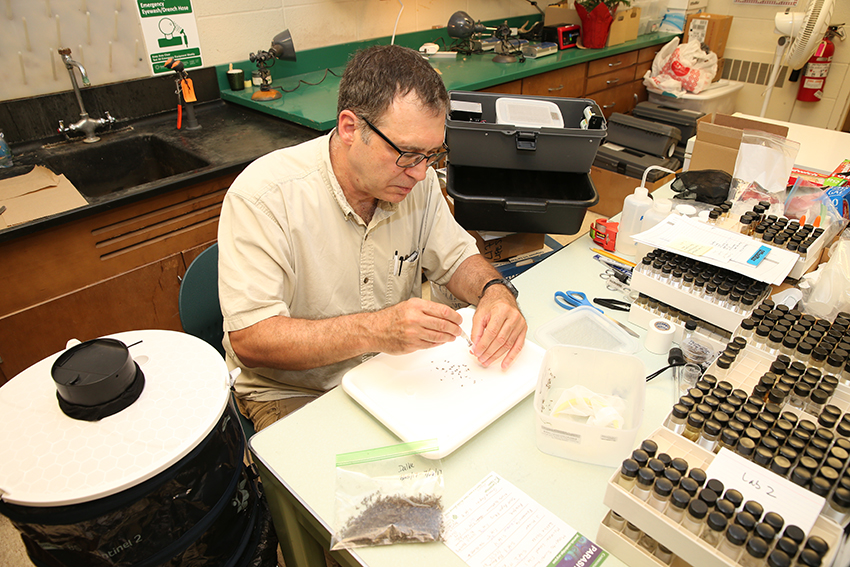 Those conditions, which have allowed for the emergence of diseases such as that caused by Zika virus, are cause for concern — especially as mosquitoes that vector, or carry, such viruses migrate farther north.

“What’s happened the last two to three years has led to a lot of concern about mosquito-borne pathogens and viruses,” said Dr. Dan Pavuk, an insect biologist and lecturer in Biological Sciences at Bowling Green State University. “South Florida last summer in mosquito season had more than 200 cases of the Zika virus in humans that were actually documented to be transmitted by mosquitoes. That has spurred the interest in revitalizing a lot of the mosquito surveillance.”

The Wood County Health District recently received a $17,696 grant from the Ohio Environmental Protection Agency to study mosquitoes in Wood County. The health district contracted with BGSU to assist in its mosquito surveillance project.

Pavuk and two undergraduate biology students, Erica Eskins of Bellevue, Ohio, and Hannah Alanis of Oregon, Ohio, have been working on the project all summer. They’ll set the traps throughout Wood County, including three sites in Bowling Green and one each in Pemberville, Grand Rapids, Perrysburg, Rossford, North Baltimore and Walbridge.

“We go out at least once a week and set the traps and then go back the next day to pick them up,” Pavuk said. “Most people don’t want to work with mosquitoes, but Erica and Hannah were actually really excited about working with them, and they both have gained a lot from this particular experience.”

When Pavuk was an undergraduate student in the late 1970s, he said, there was a large amount of mosquito surveillance in Ohio and the United States because of other viruses that are vectored by the insects. The spread of St. Louis encephalitis, California encephalitis and Eastern equine encephalitis had health officials on high alert at the time.

Now, with climate change, there’s a concern that some mosquitoes that vector Zika virus are moving farther north.

Pavuk also said that the yellow fever mosquito, Aedes aegypti, a major vector of Zika virus and several other viruses such as yellow fever virus, dengue virus and chikungunya virus, does occur as far north as Cincinnati.

Pavuk and his students are primarily concerned about surveying mosquitoes, Culex pipiens and other Culex species, that vector the West Nile virus. He said there have been a number of counties in Ohio this summer that have captured mosquitoes that have tested positive for the virus.

“It’s been around for about 15 years now throughout the United States, and even though there is not a huge number of cases, there are cases reported every year across a large part of the U.S., even in Ohio,” he said. “The virus can be lethal for some people with other health issues and older individuals, but only about 1 in 150 people develop serious complications from this virus. Horses are very susceptible to it, so there are vaccines for horses.”

After capturing the mosquitoes in their traps, Pavuk and the students put them in a freezer, then overnight ship them to Columbus. The Ohio Department of Health has a vector disease unit that tests the vectors of West Nile virus.

Pavuk said the Ohio Department of Health has tested more than 200,000 individual mosquitoes this summer using molecular techniques to identify DNA from the virus.

“We’ve had several individual mosquitoes in Wood County that tested positive for West Nile virus,” he said. “Franklin and Lucas counties have had a number of cases, as well as the Cincinnati and Cleveland areas and other big urban counties. That’s really a function of how large their mosquito surveillance programs are in those large urban areas. The more mosquitoes you catch, the more likely you’ll find some that are infected.

“There are probably more mosquitoes out there that are infected — not enough to cause an epidemic, but they’re out there. Toledo has the Toledo Area Sanitary District, and they’ve had that for decades. The purpose of that program is to survey the mosquitoes for viruses, educate the public about reducing mosquito breeding habitat and spray if necessary.”

Eventually, the Centers for Disease Control and Prevention in Atlanta, which tracks mosquito-borne diseases across the country, collects the data if there are any West Nile disease-positive mosquitoes.

In that way, the primary purpose of the Wood County surveillance project, Pavuk said, is to provide public health officials in the Wood County Health District and the Ohio Department of Health with an early warning system.

“If you see a huge increase in the number of mosquitoes testing positive for West Nile virus, then we have to be concerned with how we reduce the numbers of those mosquitoes. Do we control the larval habitats? This year has been worse than last year because we’ve had more rain off and on.”

Many mosquito species don’t need a lot of water to breed and some can breed quickly — so the water doesn’t need to be there very long. Pavuk said homeowners are encouraged to eliminate standing water whenever possible by emptying buckets, bird baths and other water containers every several days and making sure gutters are not clogged and holding water. Eliminating standing water is helpful in reducing available habitat for mosquito larvae.

“And then there is the nuisance issue,” Pavuk said. “A lot of these mosquito species aren’t vectoring anything. How do we control those mosquitoes? You want to minimize the amount of the insecticides you’re putting out there because these can have negative impacts on other organisms. Eliminating larval habitat is a good way to reduce the numbers of these mosquitoes, too.”