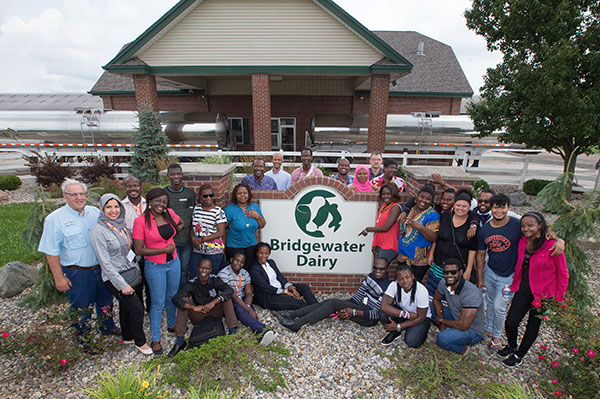 “A life-changing experience” was the common refrain at the closing reception for the 25 fellows of the Mandela-Washington Fellowship for Young African Leaders Institute (MWF-YALI). Both they and those at BGSU and the community with whom they interacted expressed the profound effect the experience had on them.

Over six intensive weeks, young leaders from all over sub-Saharan Africa lived and studied together at the University, led by institute directors Drs. V Jane Rosser, director of the Center for Civic and Community Engagement; Dr. Christopher Frey, associate professor in the College of Education and Human Development; and Distinguished Service Professor Kefa Otiso, professor of geography and director of the Global Village.

BGSU faculty and graduate students worked with the fellows, accompanying them to places such as the Honda plant in Marysville and a high-tech dairy farm near Indiana, to city council meetings in Toledo and Bowling Green, battered women’s shelters, and even to the Toledo Mud Hens for their first experience of an American baseball game. Community members welcomed them into their homes for overnight stays and meals.

In thanking the organizers and the community partners, Emily Miki of Cameroon said, “Forty-two days ago we didn’t know what we were getting into, but this has been a life-changing experience that has left moments of joy inscribed on our hearts.”

The African visitors were a remarkable group of young adults who left their homes, families and the philanthropic organizations they have founded in their countries to come to the United States to deepen their already substantial leadership skills. The method was to network and meet with university, civic, nongovernmental organization and business leaders to gain knowledge and experience they could take back with them. Their itinerary took them from Bowling Green to Columbus, Ohio, to Detroit to Chicago and finally to Washington, D.C., where they would meet with the other YALI fellows in a closing summit.

“When we applied to the U.S. Department of State to be a Mandela-Washington institute, we were hoping we would be able to teach you a lot, but we found out pretty quickly that we were learning more from and about you fellows and our communities than maybe even you were,” Otiso told them at the July 27 reception.

Patrick Makokoro of Zimbabwe said, “The journey we’ve taken together as Mandela fellows will allow us to look back at Mother Africa with new eyes and realize you don’t know what you don’t know until you seek to find out. There is more cultural diversity in the world than we know and we have also learned that to be first, you should be last.

“My colleagues have inspired me to look at the world through different lenses particularly when addressing poverty, corruption, hunger and disease,” he said. “Maybe now is the time for us to say no to leaders who neglect us to aggrandize themselves, who have looted us for their personal wealth.”

By the third week of the fellowship, Boubacar Diallo, from Guinea Conakry, was already thinking about how he can provide inclusive leadership that stops factional disputes and fights among his countrymen.

The lessons of the fellowship were many. One, especially emphasized by Rosser, was “Be careful not to be weak while empowering the weak.” For Molefi Nyofane of South Africa, who founded an NGO eight years ago to help youth and children in rural villages that has since sent numerous students to secondary school and university, “This was an important lesson for me. I learned that as a leader it’s important to take care of yourself as well, educationally, civically and spiritually.”

This is especially pertinent because these young leaders often donate their time and much of their own salaries to support the initiatives they have created, which range from youth empowerment and sanitation programs to help prevent infant death and disease, part of the extensive efforts of Nsuka Bula of Angola; to creating a more sustainable environmental, educational and economic plan for the people of the Kenyan village of Onyango Boaz Onyang; and to education for marginalized women and young girls who sell sex for survival, the project of social worker Loice Kapondo of Zimbabwe.

“Meeting these other amazing young leaders has changed my life,” said Chibuzor Mirian Azubuike of Nigeria, author of “The Girl Who Found Water.” “The fellowship has sharpened my skills but it’s also given me time to reflect on myself and what kind of leader I want to be.”

Posted as a news reporter during her mandatory national service to an area in which water was a major issue, Azubuike survived an attack by the terrorist group Boko Haram and became determined to do something to help those living under such desperate conditions. She founded the organization Cascade, which raises money to bring water to the area.

With their varied backgrounds and specialties, the fellows can now serve as resources for one another. Dr. Aishatu Abubakar Abdullateef, a psychiatrist, is documenting the numbers and social challenges of street children in northern Nigeria, to help advocate for the children by helping the government design better aid programs.

“I have also learned from my roommate, from Sudan, where they also have the problem but are getting it right with their program,” Abdullateef said. Although she deeply missed her four young children at home, she said finishing up the fellowship was “bittersweet,” because it meant leaving the friends she had become so close to.

“I know that whatever our vision for Africa, we have to do it together.”

Frey said he was surprised by how similar some of Africa and northwest Ohio’s problems were, despite the difference in circumstances and magnitude.

“It helped me see our region in a different way,” he said. “Beyond the organizations and programs there are the larger networks where you can see the intersections between things like poverty, LGBT youth and homelessness, water quality, sexual orientation and environmental racism. The fellows were all here to learn about our region, and we began to see the interplay between the topics we identified. We have similar struggles.

“This was a really special thing for BGSU and Bowling Green to have been able to tap into this larger program. I realized our community is well-practiced in receiving people. It’s also a globally conscious region. People in northwest Ohio are thinking about their connections to the rest of the world.”

Frey said he, Rosser and Otiso saw themselves primarily as facilitators for the Mandela group, who are used to being proactive.

“The fellows are the peers of many of the people we met, so once they made the relevant local connections to their particular work, they sometimes met one on one with them.”

Kapondo said that Jackie Dubler of the Bowling Green mayor’s office “totally understood what my work is about and helped connect me to other people who can help me provide the psychosocial support these girls and women need.”

Teacher Anastasia Alvina de Klerk from Namibia co-founded the Janet Martin Charity Fund to assist the elderly and single-parent families, as well as orphans with their school necessities. She has organized after-school homework sessions, art and poetry classes, talent shows and summer camps, and has plans for a number of other initiatives, including a feeding program. “I attended a board meeting and met with people from ProMedica who gave me a lot of good information on how to feed people,” she said. “I also was inspired by the summer camp (Tech Trek) for girls that Deborah Wooldridge led, and I’d love to do something like that back home.”

Although the fellows have said goodbye to Bowling Green, at least some of them may be back. At 7 a.m. July 29, Frey was taking de Klerk to an entrance exam for the Teachers of English to Speakers of Other Languages program, since she is considering continuing her education at BGSU.