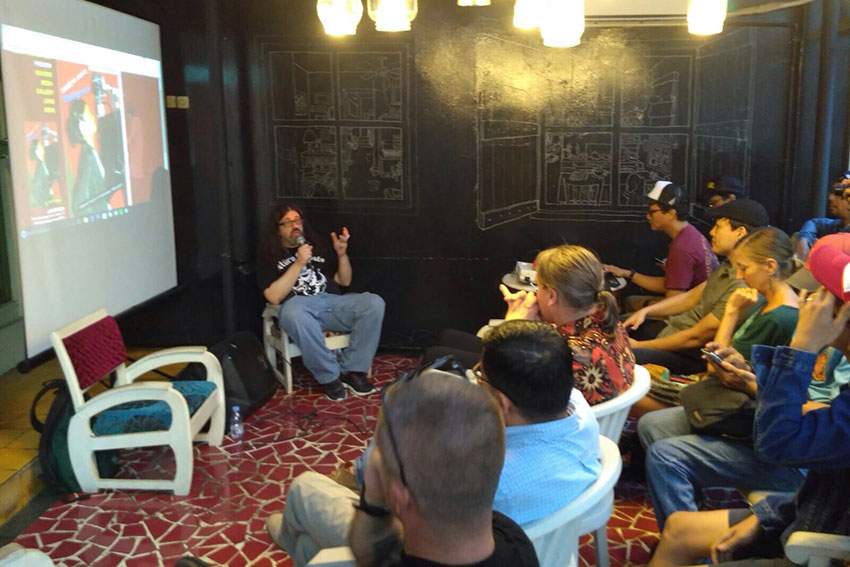 In life as in music, timing is everything. For Dr. Jeremy Wallach, a professor of popular culture, his 1997 trip to Indonesia to conduct research for his doctoral thesis came at a pivotal moment in the political and social life for that country, and his topic — the Indonesian music scene — played a role in the change that led from dictatorship to democracy the following year, when the authoritarian government of President Soeharto was toppled.

Wallach used his research, which took him to college campuses, cafes, recording studios, rock concerts, rural villages and urban neighborhoods, for his 2008 book, “Modern Noise, Fluid Genres: Popular Music in Indonesia 1997-2001,” published by the University of Wisconsin Press. The book also received a Gustave Reese publication grant from the American Musicological Society. Hailed by music writers and fellow researchers when it was released, it has now been translated into Bahasa Indonesia by Jakarta publisher Komunitas Bambu, with a new introduction by Wallach and a new title: “Musik Indonesia 1997-2001: Kebisingan and dan Keberagaman Aliran Lagu.”

“It’s a very good translation,” Wallach said. “They changed the cover and the title but the rest is pretty much unchanged except for the introduction.”

The new preface reflects on the change in Indonesia’s political structure and also validates some of Wallach’s optimistic predictions, notably that “Indonesia’s national culture was strong because it embraced diversity,” an embrace exemplified by the hybrid popular music genres explored in the book. “This boded well for democracy . . . Indonesian democracy would succeed because the urge for inclusiveness was stronger than the urge to fragmentation and rejection of others. Because Indonesian life was lived in a state of togetherness, fundamentally social.”

He also argued that underground rock music was important in a newly democratic Indonesia, and today the Indonesian president is a “diehard metalhead,” Wallach notes humorously in the new edition’s introduction. This is also an indicator of the genre’s enduring and pervasive popularity.

Wallach and his wife, Dr. Esther Clinton, have recently returned from an invited visit to Indonesia, where he gave a presentation about the book at the American Embassy in Jakarta to a record crowd. This was arranged by Rebekah Moore, the cultural outreach representative with the embassy and herself an ethnomusicologist. Co-presenting were music luminaries Wendi Putranto, senior editor at Rolling Stone Indonesia, and Arian Tigabelas, frontman for heavy metal legends Seringai and former vocalist of Puppen, a seminal underground group from the 1990s to early 2000s. Wallach has known both of them for 20 years. The embassy presentation, which ended with a performance by the industrial metal band Koil, was followed by a four-hour seminar at a café for Indonesian scholars who asked to extend the conversation.

The new edition and Wallach’s visit and presentations were covered by Indonesian and Singaporean media that reach millions of readers, including an in-depth article in the Jakarta Globe.