Research may disrupt the canon of Renaissance art history 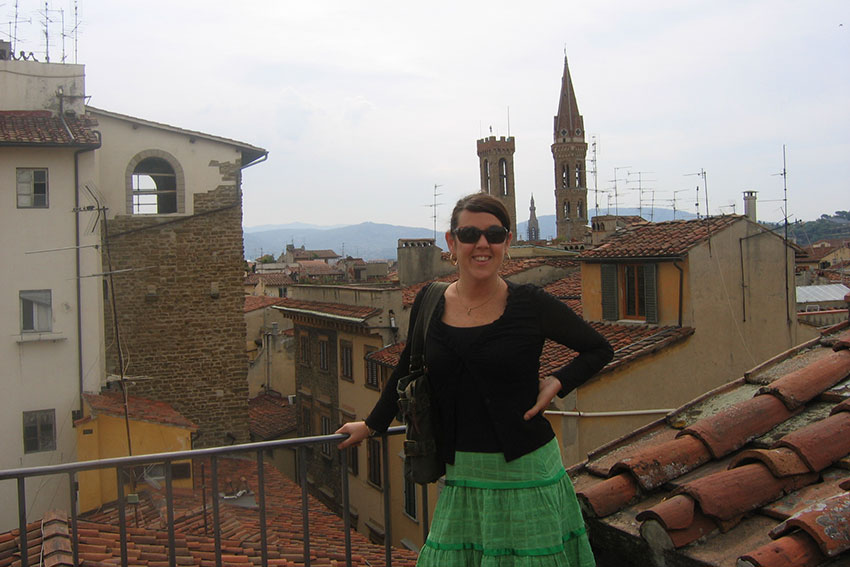 A Bowling Green State University art history professor is about to disrupt the traditional conventions about Cosimo de’Medici – one of the most important figures in the rise of the Italian Renaissance.

Dr. Allie Terry-Fritsch’s research rediscovers and examines the 15th-century secular users of the first public library in Florence, Italy, at the convent of San Marco and “challenges the canon of Renaissance art history itself,” she explained.

The associate professor of art history in the BGSU School of Art received a prestigious 2017 National Endowment for the Humanities (NEH) Summer Stipend to support the completion of her book titled “Cosimo de’Medici, Fra Angelico, and the Public Library of San Marco.” Terry-Fritsch, who is thought to be the first BGSU faculty member to receive an NEH Summer Stipend in 20 years, is in Florence for two months this summer to wrap up the research for her book. Of the 900 applicants, she was one of four art historians to receive the award and the only scholar to be working on a non-modern topic.

Her work this summer focuses on the same topic she started as a graduate student in art history at the University of Chicago in 1997. Her master’s thesis was on the Medici appropriation of the cult of the Magi in Florence. With that paper, she started to question if the support of the Observant Dominican convent by the pious and socially inclusive Medici was politically, rather than religiously, motivated.

The convent is famous today for the nearly 50 frescoes painted by the artist Fra Angelico under Cosimo's patronage from the late 1430s through 1440s; however, the library within the convent "is an even greater marvel," she said, "as it was the very first library to exist as a physical site to sit down and examine books–it was considered a laboratory of learning."

"My narrative seeks to cast the San Marco library and the nearly 50 Fra Angelico frescoes within the convent in politically motivated terms," Terry-Fritsch said.

Part of her research is to discount the idea that the frescoes and cloisters were viewed only by Medici and the friars of the convent.  She believes the frescoes were visible to non-religious individuals who came into the convent to use the library created by Medici.

“What I ultimately uncovered, and what formed the basis of my Ph.D. dissertation, was information that revealed that not only was the convent accessible to non-religious scholars who used the library, these library users were some of the most prestigious political thinkers of Renaissance Italy,“ Terry-Fritsch said.

To support her premise, Terry-Fritsch is spending her time primarily at San Marco examining the frescoes first hand, and reconstructing the route by which users of the library traversed the spaces of the religious convent. Though the convent has been renovated numerous times over the past six centuries, she has looked closely at "the structural traces of the cloister and dormitory that were built specifically for Medici and his humanist colleagues," she explained.

While his contemporaries most likely did not have access to all of the paintings, Terry-Fritsch plans to complete an analysis of the artist's visual vocabulary for the lay and religious communities. She also will re-photograph each of the frescoes, the library and the architectural path to be included in the book.

She also is looking at "critical documents related to Cosimo's patronage of San Marco, as well as the development of the library during Cosimo's lifetime and after his death.  Looking at the original documents, housed in other Florentine institutions" will "ensure the accuracy of my transcriptions. ... and the accuracy of my research."

Many scholars have written about Medici's influence, but the Terry-Fritsch book may "give a new interpretation of a very well-known group of art works. ... A political reading of these art works would represent a very important contribution to our understanding of Italian Renaissance art and culture," stated one of the anonymous NEH application reviewers.

Another panelist remarked, "Fra Angelico's frescoes have been treated as delicate, other-worldly meditations for a small community of cloistered monks--not that they were not those things—but Terry-Fritsch's study will add a great deal of scrupulously researched information to that limited view by showing how the frescoes engaged with the world beyond the monastery by means of Cosimo de' Medici's patronage."

According to Terry-Fritsch, the timing to complete this book seemed right. She has published more than 20 articles and two books and has "a great editor who is already interested in publishing the Medici book."