Museum recently purchased coffee server made by Muir in 1987 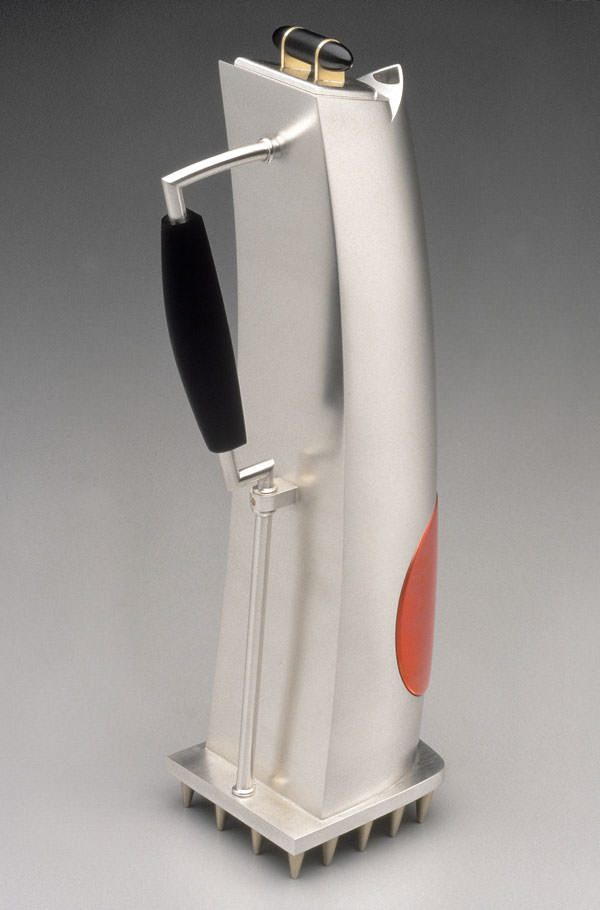 Work by award-winning metalsmith Thomas Muir, Distinguished Artist Professor at Bowling Green State University, has been shown around the world, featured in a number of books and magazines, and is collected in museums and by private owners. Muir is highly regarded both for his art and his craft, particularly in hollowware. He blends the functional with the aesthetic, often using human anatomy as a reference — a hand might serve as a teapot or infuser, for instance.

Now his work can be found closer to home, in the Toledo Museum of Art. The museum recently purchased “Cycladic Figure Impregnated,” a coffee server made by Muir in 1987. It is the second in a series he created between the mid-1980s and ’90s; the first is in the Art Institute of Chicago. They are Muir’s interpretation of that most ancient and basic of forms, the vessel, and combine his playful perspective and intense attachment to and fascination with natural history.

The series also represents a turning point in his work, Muir said, as the first in which he uses a direct reference to historical artworks, in this case the Cycladic figures in the Indiana University Art Museum and the Metropolitan Museum of Art. Vessels and sculptures from this Greek regional civilization dating to before 3200 B.C. often referred to the female form and tended to maintain harmony of parts and attention to proportion.

“The hollowware vessel, across cultures, is a fundamental vehicle for functional as well as aesthetic exploration,” Muir said. “Historically, and in my own interpretation of it, it can represent the body and life; its emphasis is on the interior and speaks of containment, shelter and nourishment. The vessel is one of the most basic, ancient and accessible artistic forms. All of the things that sustain, enrich and celebrate life can be encapsulated in the vessel: it evokes the womb, the seed, cooking and food storage, human dwellings and the like.”

For Muir, “these works are the most challenging and rewarding in the simultaneous integration and successful resolution of key factors: the history of art, the history of craft and metalsmithing, my aesthetic concerns, utility, engineering and my sense of humor.”

The Toledo museum, which has had the vessel in its conservation area for several years before purchasing it, has not yet announced plans for its display.

Muir was named Distinguished Artist Professor in 2005 by the Bowling Green State University Board of Trustees, becoming only the 10th faculty member in the history of BGSU to that date to receive the honor in the category of research/scholarly activity. He is head of the jewelry and metalsmithing area in the School of Art.

He received his Master of Fine Arts degree from Indiana University, Bloomington, and his Bachelor of Fine Arts from Georgia State University in Atlanta, and has lectured and taught widely. His award-winning work has been published and exhibited extensively in art, craft and design exhibitions, earning him multiple best-of-show or first-place awards. In addition to the Art Institute of Chicago, collections include the Renwick Gallery of the National Museum of American Art, Smithsonian Institution and The White House Collection of American Crafts, National Museum of American Art, Smithsonian Institution. In 2009, he received the Outstanding Achievement Award from the Ohio Designer Craftsmen for having made a major contribution to craft in Ohio.