Bringing the past full circle 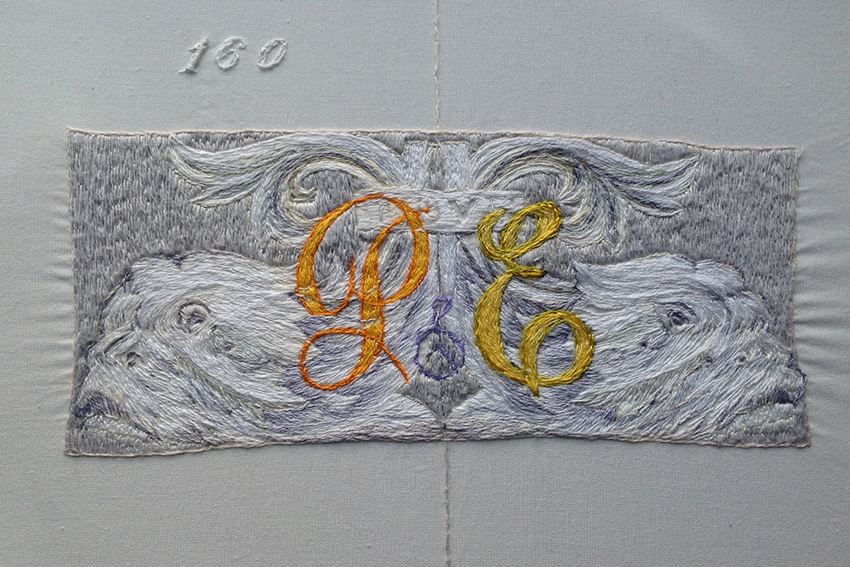 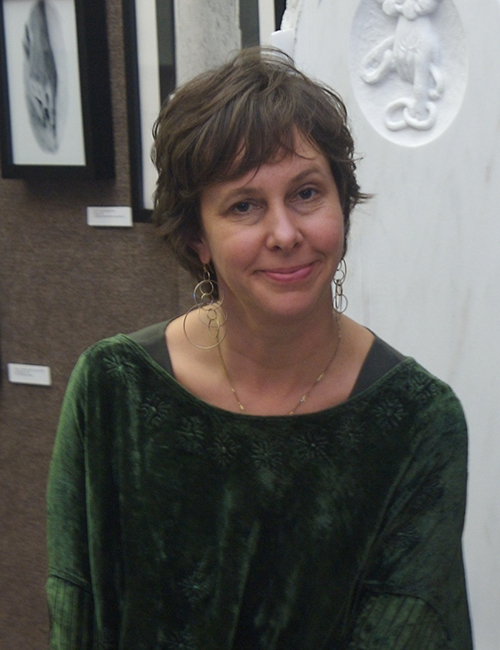 “There’s no question that, for me, Gettysburg is where I want to be,” Anne Tait remembers thinking when she applied to be artist in residence at Gettysburg National Military Park.

“I see Gettysburg as quite the mecca for the work I have been doing for the past 10 years on memorial art of the 19th century,” she wrote in her application. For someone who had long been interested in the ways in which we conceive of and represent the end of life, the historic battlefield and museum promised rich inspiration.

The experience did not disappoint, said Tait, a 1994 Bowling Green State University alumna noted for her knowledge of gravestone studies. She spent part of last spring at Gettysburg while on sabbatical from Roger Williams University in Rhode Island, where she teaches printmaking and painting. Touring the grave sites and finding memorials yielded a portfolio of images that she is drawing upon for the continuation of a new phase of work she began in 2015, which combines historical formats and materials with modern technology.

Tait is creating a series of large, backlit, embroidered tondi. The tondo, dating back to the Italian Renaissance, is a circular artwork that grew out of the ceramic plates often given as a wedding gift to symbolize fertility and a fruitful marriage; they often depicted the Holy Family. Tait had used the format in an earlier series and continues to “find it evocative of both life and death.”

The round tondo style was adapted in the 19th century for memorial decorations for gravestones — which is what Tait was interested in at Gettysburg. In the 19th century, she said, “they were moving out of the Colonial anti-papist, anti-Anglican, bleak and ornate styles. They consciously moved away from the pre-Romantic ‘dark and dreary’ slate toward marble and into a less somber style. They appropriated all sorts of images from print materials. They showed hands holding things, flowers, designs, sheep, sleeping lambs or babies.”

At Gettysburg she observed that, when the South got into the act with memorials to slain Confederate soldiers, other designs became popular that painted the South’s role in a different light. “It was a fascinating time,” Tait said. 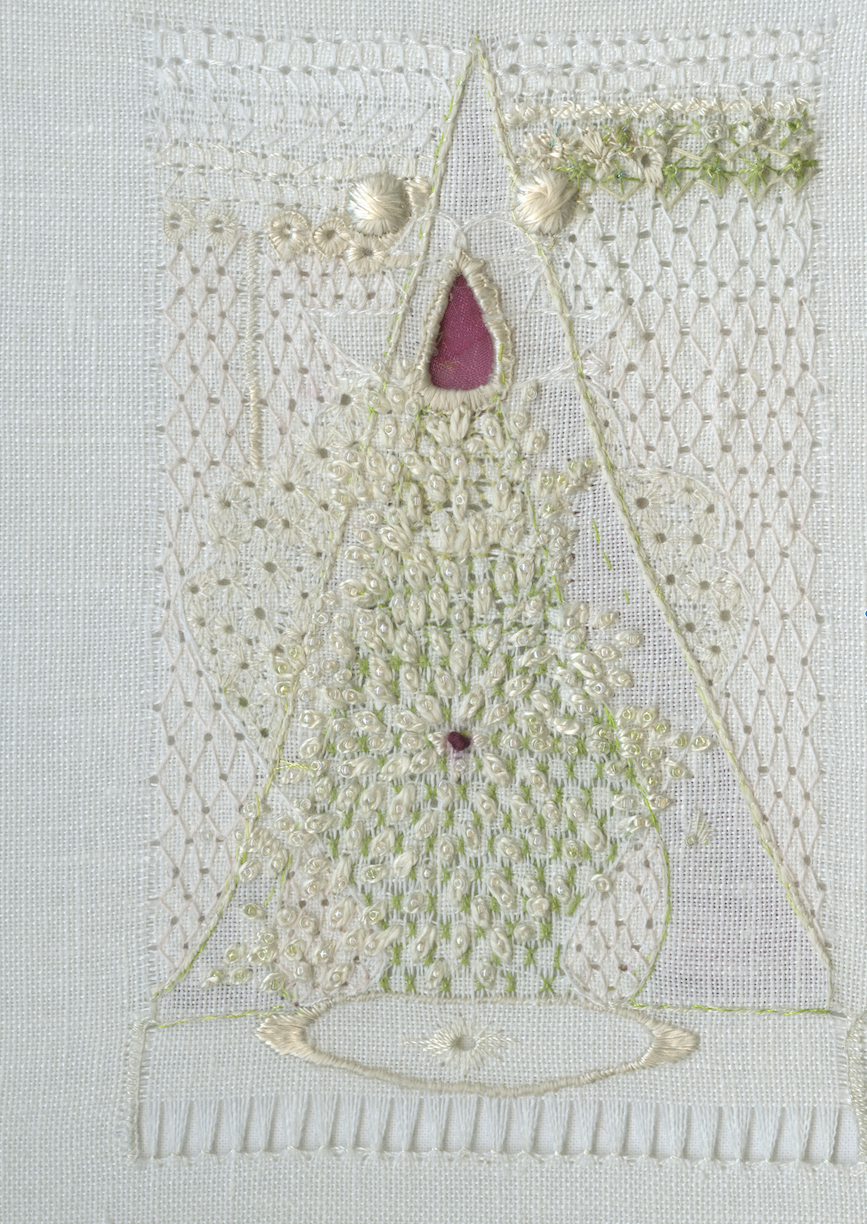 Her choice of embroidery as the medium for her art dates to her childhood; she later developed her skill at the Royal School of Needlework in London. “I love making things. I’m a very process-oriented person.”

Dreamlike, the exquisitely embroidered designs suggest the memorabilia of a life — a bit of delicate lace, a satin button, a silver wedding ring, a monogram, a corset.

Using LED lights, she layers the embroidered pieces with digital images from Gettysburg and from her explorations of the former Vermont Marble Co., which had been the leading provider of marble for headstones in the country. In the abandoned buildings she found a trove of patterns for headstone memorial designs.

At Gettysburg, Tait was able to research and work in one spot. As artist in residence, she was given an apartment, a stipend and tours of the facilities. “The staff were wonderful; it’s a lovely group of people and an amazing collection.”

Tait’s artwork has been exhibited widely and has been featured and written about in The New York Times, the Providence Journal and other papers and in academic and trade journals such as Stone in America.

“Her early work exposed a sinewy, eccentric world of floating forms that pushed the picture plane in an intentionally disorientating setting, intending the purposeful subterfuge to be both mysterious and comedic,” according to the Park Service’s site. “While her earlier work addressed the establishment of self from conception to maturity, her more recent work frames these questions by considering the truncation of life and the ending of it. She reflects on the culmination of earthly life through her art, in particular her art inspired by her researches into cemetery imagery, and the burial traditions of the 19th century.

“Programs like Gettysburg National Military Park’s artist-in-residence series, in which acclaimed artists seek inspiration from the beauty and history of our national parks, and agree to share their ideas with park patrons, represent some of the highest aspirations of the National Park Service.”

Tait’s road to where she is now as an artist and scholar has been one of multiple influences, an educational and professional journey that has allowed her to meld her interests in art, historical preservation, monuments, old cemeteries, and how all that pertains to popular culture.

As a BGSU student in the mid-1980s, she majored in English (literature), with a minor in art history. The literature was expected: That was what all the women in her family had done. The art history came as a surprise, a love she discovered at BGSU. Not yet knowing what she wanted to do with her life, she followed her interests, taking literature and poetry classes with faculty such as Dr. Ralph Wolfe, Distinguished Professor Emeritus of English and Gish Professor of Film Studies; Philip Terrie, Warren Wolfe and Richard Carpenter. She loved reading Nathaniel Hawthorne, Herman Melville, and Transcendental literature. In a Black Literature class she was astonished when legendary writer James Baldwin, who was writer-in-residence, visited the class. An art history class she took as a general education course opened another avenue, and she enjoyed classes with Drs. Dawn Glanz and Willard Misfeldt names she remembers well now, and even conversations in class.

“I liked my teachers,” she said simply. “I loved literature and I was a pretty good writer. I loved Bowling Green. It was a really great experience.”

However, she did not complete her degree directly but left school still lacking a couple of credits. That turned out to be fortuitous, because when she decided to apply to the Rhode Island School of Design (RISD) bachelor of fine arts program, not having a bachelor’s degree made her eligible for a substantial scholarship.

“Deciding to go back to school full time, I knew I had to make a commitment,” she said, so she wound up taking the courses she needed to finish her BGSU degree while earning her BFA from RISD. Three years later, she received a Master of Fine Arts (with honors) from American University, in Washington, D.C.

After graduation, she taught at RISD for three years, from 1997-2000, before joining the faculty at Roger Williams.

“I never thought I’d write again after BGSU,” she said, but her skill served her well. She is also a frequent lecturer and speaker and a member of the board of trustees of the Association of Gravestone Studies, a national organization that studies gravestones for their creative, genealogical, cultural, creative, historical and landscape significance. She is also a member of the Death and American Culture and Gravemarkers and Cemeteries group of the Popular Culture Association/ American Culture Association, and shared her gravestone study in an address at the association meeting last fall.

She has spent a lot of time in historical cemeteries. In fact, she even had a studio in the gatekeeper’s house at a cemetery in Providence, which was unfortunately destroyed when it was run into by an errant car. She is sad to see “all the urban cemeteries going away” as they are crowded out by cities and relegated to the outskirts.

Through her art, scholarship and civic engagement, Tait is bringing the beauty and lessons of the past full circle.