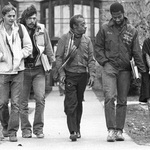 James Baldwin came to Bowling Green State University in 1978 as writer-in-residence and returned in 1979 as a Distinguished Visiting Professor in the Department of Ethnic Studies. Dr. Ernest Champion, professor in the Department of Ethnic Studies, first invited Baldwin in 1977 to deliver a public lecture at the University and it was during a post-lecture conversation that Professor Champion suggested a more substantial visit. It was subsequently agreed that Baldwin would become writer-in-residence for a month in the spring of 1978. That Bowling Green State University was the first academic institution with which Baldwin affiliated himself was the consequence of many factors not least of which, as Baldwin later said, was that nobody had asked him before. However, it was also (and perhaps most importantly) a positive response to the energy and enthusiasm of the fledgling Ethnic Studies Department and its faculty.

Needless to say, to have an artist of Baldwin’s stature at BGSU was of enormous significance to both the Ethnic Studies Department and the University as a whole. During his month as writer-in-residence in 1978 and his quarter as Distinguished Visiting Professor in 1979, the students and faculty of this mid-sized, mid-western state university were given the rare opportunity to engage in discussion and conversation with one of the most important American writers of the twentieth century. Yet for all the apparent distance between the author of Go Tell it on the Mountain and The Fire Next Time and his mostly white, rural middle-class students, Baldwin made clear that his teaching was reciprocally rewarding. From his very first class when one of his students asked him, "Why does the white man hate the n***er?" Baldwin found himself, in the classroom, confronting the philosophical implications of the racism he fought so eloquently to understand through his writing.

And Baldwin was driven to understand the philosophical implications, and social and historical consequences, of racism. Baldwin was a supreme artist in whichever genre he chose to write, whether fiction, essay, drama, or poetry. Yet for all the diversity and enormity of his literary talent, as well as the Catholicism of his subject matter, to understand the ways in which the perversions of racism, oppression, and intolerance denied a wholeness to human relationships was the keystone of his writing. As Baldwin, reflecting on his classroom experience, said:
“…the children, very soon, did not need me at all, except as a benign adult presence. They began talking to one another . . . They were talking of their desire to know one another . . . each was trying to enter into the experience of the other. The exchanges were sharp and remarkably candid, but never fogged by an unadmitted fear of hostility. They were trying to become whole." (Champion, 13)