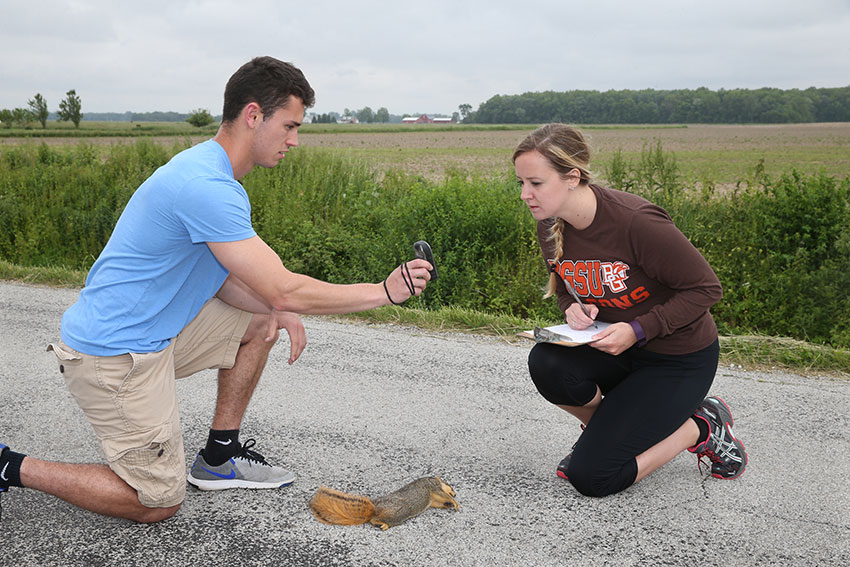 The word “roadkill” does not evoke a pleasant image; it is even sometimes used as a humorously derogatory term to denote something vaguely akin to trash. But for BGSU graduate student Lauren Jonaitis, roadkill is more than simply dead animals; it represents a tremendous loss of life and also the degree to which humans are impinging on natural habitats and pathways. Rather than simply bemoan the carnage, Jonaitis is using roadkill as a way to study what is happening and as a guide to improving planning and decision making.

“It’s estimated that in the United States, a million animals, birds and reptiles are hit every day,” Jonaitis said. “As an undergraduate, I did an independent study in northern New York where I surveyed about 320 miles of road. Within two months, there were close to 400 dead frogs found on that stretch of roadway because it bisected a wetland. There have to be better ways of managing this.”

A second-year ecology and conservation biology major in Dr. Karen Root’s lab, Jonaitis said she has come to the realization that conservation can be more about managing people than managing wildlife. “I now realize that a career that is purely research is not for me,” she said. “I want to be more involved in science education, where I can inspire and motivate people to help protect our planet.”

“One of the things I admire about Lauren is that she is not only keenly interested in learning how to be a better scientist but also how she can use that science to make a difference,” Root said. “She is passionate about having a positive impact on the world and getting people involved in that effort. The project that she developed for her master of science work exemplifies these goals.”

Since coming to Bowling Green from New York as a graduate student, Jonaitis has observed a lot of roadkill on the roads surrounding the Oak Openings Preserve.

“There is only 2 percent of oak savanna in the world, and Oak Openings has some of it,” she said. “Intact oak savanna, what we have in Oak Openings, is one of the rarest plant communities on earth. This area is a biodiversity hotspot, with one-third of all of Ohio's endangered plant and animal species. So, I began to wonder, is this a problem? How can I make a difference?”

She has taken a scientific approach to the issue, and her project to understand animal movement and mortality using roadkill as a tool in a human-dominated environment is the topic of her master’s thesis. Her work has caught the interest of the Toledo Metroparks, and earlier this month she presented her project at the Citizen Science Association conference in St. Paul, Minn.

From May through October 2016, Jonaitis used GPS to record the position and track the type and number of the dead animals along Waterville-Swanton Road, which divides the Oak Openings Metropark from Maumee State Forest. The area is a natural corridor for animals moving from one to the other, and, because of the road, a deadly one. She used the roadkill observations to see which animals were present and the routes they were traveling.

“I also identified structural features of roads, environmental variables such as vegetation along the roads and the tree canopy, whether the terrain was savannah, prairie or upland, and spatial factors to better predict and understand animal movement and road mortality. This approach can also be used in other fragmented and human-dominated landscapes,” she said.

She found dead raccoons, skunks, opossums, squirrels and chipmunks and, surprisingly, robins, which she speculated might fly too low and misjudge oncoming traffic. Animals’ perceptions could be affected by such factors as vertical road signs, verge size and the width of roads — all factors that could be taken into consideration when planning or redeveloping roadways.

“In five months I counted 292 dead terrestrial vertebrates (mammals, reptiles, amphibians and birds). Raccoons and opossums had the highest numbers, 92 and 71, respectively. The number of chipmunks and squirrels was probably low, because they are scavenged by birds and other animals,” she said.

She also did visual surveys by walking the trails in the park. “As a part of knowing I want a career with some aspect of science communication, I involved 12 undergraduate students to help me collect data and to get them more involved in research,” she said. “We would walk about nine miles in five hours.”

The experience affirmed some of the biology undergraduates’ career choice but showed others it was not what they expected, she said.

One who found the work fulfilling was undergraduate Brennan Brown, a senior from St. Marys, Ohio, majoring in ecology and conservation biology. He assisted Jonaitis with the challenging and rigorous nine-and-a-half-mile night surveys.

“We would see all the night ‘critters,’ and we used the GPS to mark any vertebrates we observed,” he said. “We saw 20-30 deer, raccoons, frogs, even a mouse. We noted the time, the floor cover and vegetation and the cloud cover.

“You can’t get all this just sitting in a class. That’s what I loved about it. It was a great experience, and I would encourage all undergraduates to get involved early and quickly.”

Brown has volunteered “from day one,” he said, in the herpetology lab and the marine biology lab, and with other graduate students’ research projects in Oak Openings, including one monitoring frog calls. As the founder of the student-run Herpetology Association, this is a special interest for him.

Like Jonaitis, Brown’s career interests have evolved over his time in school. “Ever since I was a little kid, I’ve wanted to be outside and learning as much as I can about nature,” he said. “At first I would have said I took this major because I love animals and wanted to work with them. But now I have more passion for the conservation side. I see all the damage done by development and other things that go on in the world, and I want to save and protect them.”

Jonaitis, from Rocky Point on Long Island, was fortunate as a child to have parents who regularly took her out into the trails and the woods. But today she is finding that students do not have that experience of spending time in the natural world and often are unable to identify even the most common species of birds or plants. Without that experience, she said, “it’s hard to give them a reason to care. I want to motivate and inspire people to take ownership.

“In May I presented at the Citizen Science Association on how I involved undergraduate in my research and incorporated experiential learning in collecting data. I truly enjoyed involving other students, and inspiring them to be more involved in science,” Jonaitis said.

“We are using roadkill as a way to better understand the consequences for animals living in and moving around in human-dominated landscapes,” Root said. “Her results suggest that the answer to ‘How do roads affect animals?’ is a complex one.  Some animals benefit from ease of movement along these convenient corridors, while others face peril as they seek resources on the other side. Perhaps most interesting, though, is that this subject of roadkill ignites an interest in the public about wildlife and it is something to which they can relate. It is a joy to watch young graduate students like Lauren find their passion as they develop their scientific skills and engage others, especially our undergraduates, in that process.”

Jonaitis is employing other methods of sharing as well. As part of her outreach efforts, she started the Root lab’s Facebook (Karen Root Laboratory), Twitter and Instagram accounts. “I thought it would be a good way to communicate our research to the general public. We now have 159 followers on Instagram!” she reports.