International alumna was inspired by her daughter to attend BGSU 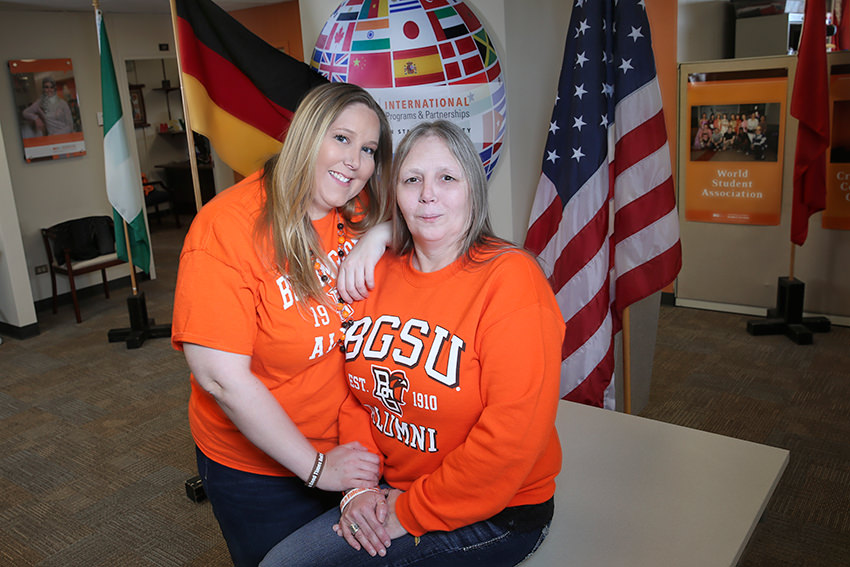 When Bianca Hutchinson ’06 talks about her mom attending BGSU, she sheds tears of joy and is nothing but proud. It’s like how a parent would speak of their own child, but in this case, it’s a child bragging about her own mother, Marisa Hutchinson ’15, ’16.

Marisa Hutchinson came to the U.S. from Germany in 1972. She met her husband through a friend and they’ve been married for 39 years. After raising two daughters, and seeing the success that Bianca had at BGSU, Hutchinson decided it was time for her to get her degree in criminal justice.

Hutchinson and her husband were very supportive of their daughter. They attended nearly all of the big events that she was involved in. Bianca, a psychology major and ethnic studies minor, was a very active student. She started three student organizations: the local chapter of the affirmative action group BAMN, Delta Chi Phi Multicultural Service Sorority and the Native American Unity Council. Bianca's father is Native American and she thought it was important to get involved in groups that define who she is.

“Background is really important to me and it was difficult for me to find other groups that pertain to who I am,” Bianca said. “Establishing these groups gave me some exposure to that diversity.”

Seeing how her daughter was so successful while attending BGSU, Hutchinson was inspired to pursue not only her bachelor’s but also her master’s degree.

“Being there for all of these events made me realize that this is really the best school out there,” Hutchinson said. “I just knew because we were so involved that this was the best university for me.”

Since Hutchinson is not a U.S. citizen, she went through the International Programs and Partnerships office for help with enrollment.

“She knew coming here that she would have barriers,” Bianca said. “She’s non-traditional and she’s not a U.S. citizen but the international office helped walk her through the process.”

Bianca is very proud of her mother. She even gave her pep talks when things got tough to help her get through her studies.

“She would call me up and say, ‘I don’t think I can do this, I was wrong,’ and I would say, ‘no you’re going to do what you told me you’d do,’” Bianca said. “And then she went ahead and got her master’s. I’m so proud of her, I love telling her story. It’s unique and it’s ours.”

Hutchinson is now working on a research project with two BGSU professors. She sits on the board of the Wood County Reentry Coalition and also works with Project Connect. Her ultimate goal is to get her doctorate and teach criminal justice.

“When you have teachers who really believe in you and support your dream, it really makes a difference,” Hutchinson said.