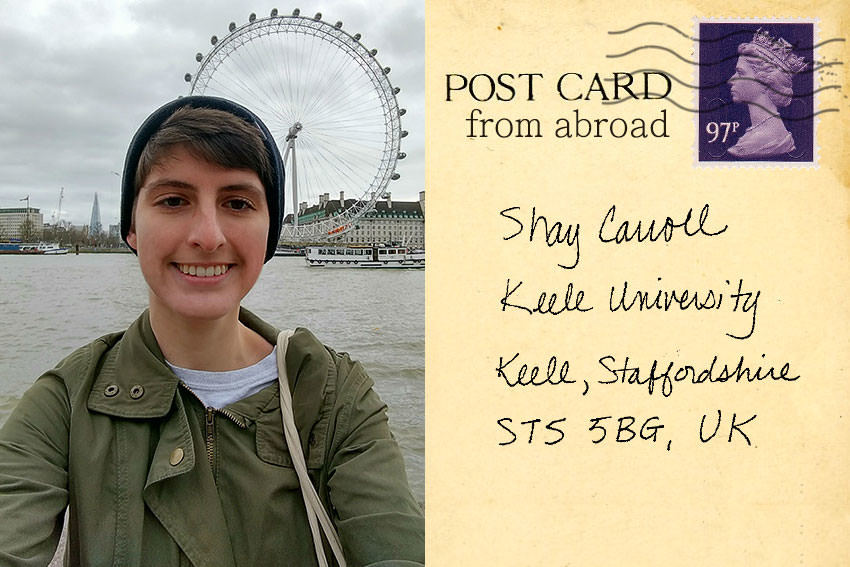 Going to England and attending school there has been my dream for so long. I was ecstatic when I finally got into the Keele exchange program after months of nervous waiting. After sorting out scheduling and flight and visa debacles, I was on my way. The first few days were extremely nerve-racking to say the very least. Study abroad students (at Keele at least) are placed into classes last, so the odds of not getting into a class that you picked are very high. So, on top of running back and forth getting my visa sorted out, I had to re-select half of my classes for the school year.

But after the first week, I was finally settled in.

I have always thought that college is about gaining new experience and knowledge while expanding upon what you already know. I have never been extremely social, so I decided that I wanted to try new clubs in addition to different classes than what I was used to. I also wanted to be sure to take advantage of how close everything was in the United Kingdom – most everything is just a train ride away ­– so I wanted to do as much exploring as I could.

As a creative writing major, I ended up taking quite a few English classes, some of which included writing workshops in which participants received peer critique and feedback on creative pieces. Sometimes workshops are ineffective if there is not a good group of people, but the workshops I took here proved to be quite useful and were especially paramount for the revision process. The professors gave some great advice about how to improve my own writing, particularly in terms of how to develop character and voice in a short amount of space.

One of the biggest things I had to learn was how to travel by myself. The first time I really went out was on a day trip to London after a Tuesday class got out early. The journey by bus and then by train took two hours total, and once I got there I had to stand outside the train station for a good five minutes questioning what I had just done when I had absolutely zero knowledge of how to navigate London.

Admittedly, spending six hours wandering around London on a Tuesday with absolutely zero planning was one of the craziest things I have done while abroad. I have also traveled to Stratford, Manchester, Liverpool, Dublin and Glasgow, and save for a few spontaneous weekend trips, I have gotten better at planning my trips in advance. Before, my experience with traveling was limited to family vacations and school/club trips, which while great, were not things I had a direct hand in planning. Thus, learning to travel and navigate the city – and country itself – on my own was a great way to gain some extra confidence and independence.

And being able to explore so freely was amazing – almost everything I wanted to see and do was just a bus or train ride away. I was eligible for a railcard too, which gave me a huge discount on rail tickets. Most weekends, I would just take a bus down to the station and go to London for a few hours to hang out in the parks, shops and museums. There was even an entire forest at Keele that was ripe for exploring, and while the university did some environmental work there, exploring was very much encouraged.

While the traveling has been great, other experiences showed me that I did not, to an extent, realize how lucky I had been in my college experience at BGSU. I had found myself a pretty good group of friends that made me feel wanted and accepted. I went to Keele expecting that I would have the same type of experience. I thought I had found a pretty nice group of people here. But the third time we hung out, they flat out told me that being gay – my very existence – was inappropriate and offensive to them. I didn’t see them again after that. I’ve encountered things like this before, but this experience helped me realize that, unfortunately, there are people like this everywhere.

One of the reasons I wanted to study internationally was to escape the hatred that was brewing with the U.S. election and the rise of hate groups. I knew the United Kingdom was facing its own prejudice with the Brexit passage, but I was naively surprised to still encounter sexism, racism, homophobia and Islamaphobia. And, much like in the U.S., people currently feel very empowered to show their hatred. So perhaps my biggest lesson has been that I can’t run from hatred, but that I can stand up against it. That I can learn from and embrace people willing to have honest conversations about the state of our world, and not tolerate people who refuse to engage in such conversations. That I, by living in an open, honest and respectful way, can stand up to hatred no matter where I live or study.