As a Sunni Muslim from Iraq, Shahad Aldoori and her family experienced persecution and continuous violence while living in Baghdad.

Aldoori still remembers the horrible moments her family endured when the war in Iraq broke out in 2003. She graduated from Bowling Green State University in May 2016 with a master’s degree in College Student Personnel.

“Bombing was everywhere,” said Aldoori, who was 15 at the time. “I remember peeking through the window at night, when the bombing usually started, and would see fire and smoke everywhere. Then, in the morning when I would go out in the street, I would see the destroyed buildings from the night before. Since then, the violence in Iraq has not come to an end.”

Being a Sunni also made her family a target of persecution in the neighborhood which was primarily Shia. Sunni and Shia are the two major religious denominations of Islam.

Since her family was concerned for their safety, Aldoori, who had just finished high school, fled with her mother and brother, to Damascus, Syria, in 2007, while her father moved his work to northern Iraq where the majority of Muslims were Sunni. Aldoori said her father needed to stay employed in Iraq to provide living expenses for her family because refugees are not allowed to have jobs in Syria.

“Living in Syria was challenging,” Aldoori said. “It was hard for us to adjust to a new lifestyle such as living in a new country and home with limited access to resources.”

Her brother attended high school, but she was not able to go to college because schools were expensive and she was not allowed to work since she was a refugee.

Her family registered with one of the United Nations refugee assistance organizations where they received beneficial assistance with medical discounts and food. The U.N. organization also provides young adults with opportunities to register in vocational and language classes. Aldoori took advantage of the classes by taking the maximum of two English courses.

In 2008, Aldoori learned of the Iraqi Student Project (ISP), which is a non-profit organization that assists Iraqi young adult refugees living in Syria to continue their education in the United States by asking colleges and universities to provide tuition. ISP also found support groups to sponsor students and raise funds for room and board expenses. It also located host families for each student to provide emotional support.

Since Aldoori was adamant about getting a college education, she joined ISP.

“The Iraqi Student Project was my only option to continue my education in the United States, but my parents were against the idea of me coming to the United States. They did not feel comfortable sending me alone to a country that is totally different from my country. However, because I insisted to come here and there were not any opportunities at that time for me to continue my education elsewhere, they agreed to send me.”

Eventually, her parents had a change of heart.

“Because Shahad was good at school and ambitious and we also knew how hard it was for her not to continue her education,” said her mother, Ohood Al-Manaseer. “So, her father and I decided that letting Shahad finish her studies in the United States was a better option for her even though having her living far away would be hard for us. We thought her education was more important.”

With her parents’ approval, Aldoori came to the United States in 2008 with dreams of getting a college education and a better life.

The Spallinger family of Bluffton, Ohio, agreed to serve as her host family.  Kimberly and Randy Spallinger, along with their sons, Minh, Jude and Eliot, became Aldoori’s support system. They opened their home to her for a place to live, especially during summers and school breaks.

Kimberly Spallinger is director of BGSU’s English for Speakers of Other Languages (ESOL) program and a former faculty member at Bluffton University who taught linguistics courses to international students.

“In my job,” Spallinger said, “I spend the majority of my time with students from all over the world. I know how rewarding an experience it is to learn from my students, and I wanted to share this opportunity with my children.

“My husband and I found it to be a good opportunity for our children to have an international student live with us, and we feel so fortunate that Shahad has really become a part of our family.”

The host mother admitted, however, at first it was an adjustment when Aldoori moved in. Not only was Bluffton a small-town environment compared to Baghdad, but there were language, cultural, educational and religious differences.

“It was a lot [for Shahad] to take in all at once,” Spallinger said. “Additionally, Shahad is extremely close with her family, so being away from them was very hard. Although we were close during her first year, it wasn’t until she lived with us full-time that first summer that it all clicked. Now, my boys see her as their big sister, and when she comes home, it’s like she never left.”

The feeling is mutual for Aldoori. 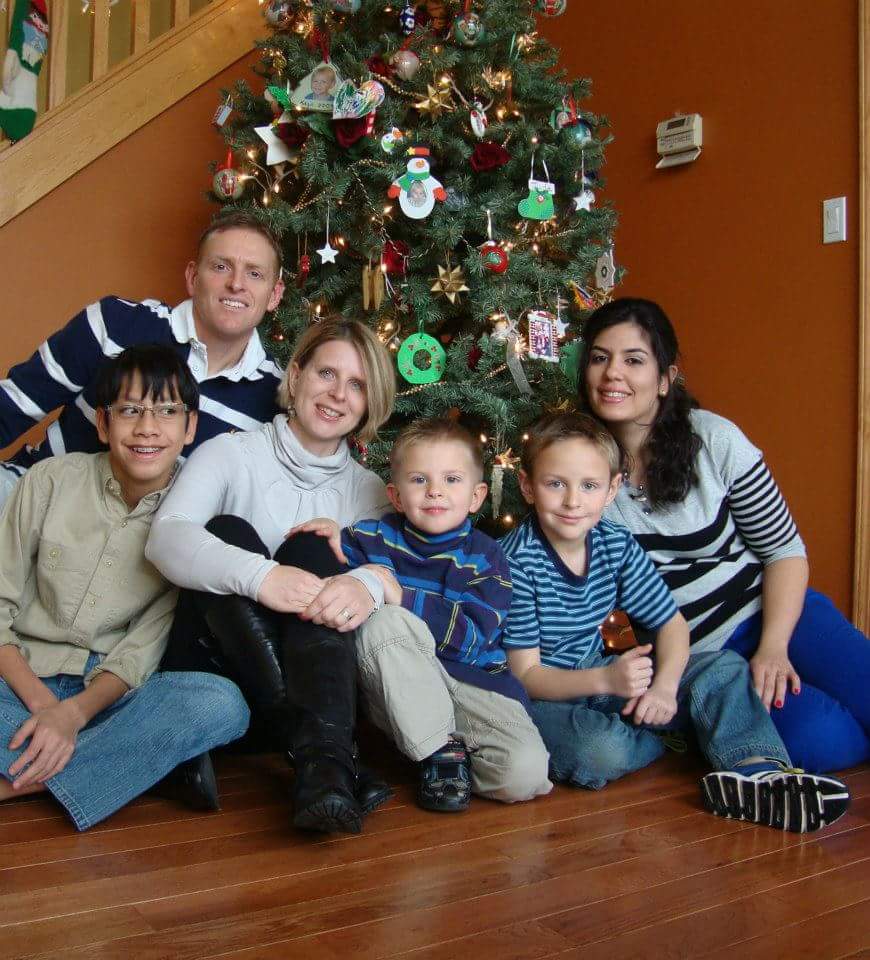 “My host family is not just a ‘host family,’ but they are really my family,” she said. “They have done so much for me to the point that they always made me feel I am part of the family. They include me in vacations and holidays and they even celebrate my Muslim holidays with me. I am honored to be part of their family and get to know such a great family like them.”

While Aldoori was completing an undergraduate degree in interior design with a minor in business at Bluffton University, she interned at the International Student Services Office at Ohio Northern University (ONU) in Ada, Ohio, planning collaborative international events between ONU and Bluffton. Through this experience, she realized she had a passion for working with college students by helping them launch their careers.

So Aldoori applied to BGSU’s College Student Personnel program because of its reputation for quality and BGSU’s proximity to her host family’s home and was accepted into the highly selective program.

Tom Siebenaler, the associate director of the Business Career Accelerator, interviewed Aldoori for the GA position.

“She was very kind and had a patient demeanor,” Siebenaler said. “I could tell she would connect with students immediately.  She was very driven and motivated to help students first and that student success was her priority above all else.”

“She provided confidence where none had previously existed and helped students understand the options available to them in life and their career,” he said. “She was effective and full of purpose, and by far it was always her kindness, happiness, willingness to listen, and personalized feedback to the students that were her best assets.”

Minru Zhao is a Chinese student and senior enrolled in the College of Business, studying finance, who can attest to the outstanding qualities Aldoori demonstrated by helping her get an internship.

"Shahad Aldoori is one of the greatest persons I have ever met during my time at BGSU,” Zhao said. “She was so patient and detail-oriented with strong communication skills when assisting me on my resume and job searches through the Business Career Accelerator. I truly appreciate her understanding of me as an international student who needed more assistance in language. I couldn’t have gotten my interview with Walt Disney Co. and my current professional internship without her help."

Destini Riddick, who graduated in May with a finance specialization degree, is another student Aldoori helped with job searches, resume and cover letter writing as well as mock interviews.  “Shahad's abilities are amazing,” Riddick said. “The advice that she gave me is something that I will be able to use throughout my professional career.”

Besides successfully helping students at the Business Career Accelerator, Aldoori shared her culture with Americans and fellow international students through an internship. She was co-coordinator for BGSU’s Cross Cultural Communication Connection (CCCC) which pairs international and domestic students. Aldoori was responsible in placing participants in small groups and planning social events throughout the semester.

The CCCC Program, which is supervised by Spallinger, was created to develop cultural understanding in today's global community by connecting people from different cultures through conversation.

In addition, Shahad gave presentations to churches, college classes and local community groups about her experiences during the war and as a refugee living in Damascus. According to Spallinger, “Shahad volunteered several times to speak at the local elementary school. In these short cultural presentations, she would introduce students to topics such as food, religion, games and holidays. The children were able to see Iraq differently than how it is typically portrayed in the media.

“She has taught so many people so much by being willing to openly share her life experiences and culture. I have been so impressed by her poise and commitment to promoting peace and cross-cultural understanding.”

Aldoori assisted the College of Business with the international festival celebration of Nowruz, the Persian New Year, marking the beginning of spring. She helped the coordinators connect with Persian students to assist with presenting the event.

Aldoori hoped her family in Iraq would be allowed to come to the United States to watch her graduate from BGSU. Her mother, however, was the only member able to secure a short-term visa.

Since graduating, Aldoori is currently interviewing for a position either in career services or international student services.

“My career goal is still working at a university,” the BGSU graduate said. “I am really passionate about working with international students, so I am hoping to end up in that direction.

“When I meet with students to help them launch their careers I do not just want them to find a job that will bring them money, but I always want them to find the job that they will be excited about every day when they go to work. Therefore, I always try to assist them with understanding the variety of career options that are available in their fields and how to connect their values, experiences and interests to their career goals and passions.”

For Aldoori’s future, she knows there is no chance of returning to her native country to pursue a career, so she has filed for asylum in the United States.

“Currently because of ISIS, women in northern Iraq are not even allowed to go outside, so they are not practicing their careers anymore,” she said. “Women in Baghdad are afraid that if ISIS controls Baghdad, then women will suffer from many things such as not being able to go to work or go to school.”

Aldoori said she continues to fear for her Iraqi family every day because her native country is still unstable with bombings and kidnappings.

Aldoori’s mother is very proud of what her daughter has accomplished in her educational endeavors as well as promoting peace and sharing her Muslim culture with others.

“She is very strong and independent,” her mother said. “I am happy for her because she would not have had this opportunity if she was still living in Iraq because of the dangerous situation. I always want her to succeed in her life and see her as a successful student affairs professional and continuing to serve her local and global communities.”