Ray to appear on PBS’s ‘10 That Changed America’ 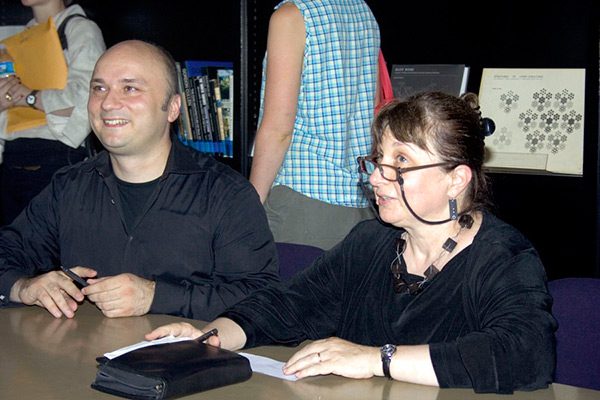 This is proving to be a good year for Chicago’s Marina City. The iconic city-within-a-city has finally been granted its long-overdue landmark status, and it will be featured in a new PBS documentary: “10 That Changed America,” a series about homes, parks and other sites that shaped the country’s history.

Dr. Katerina Rüedi Ray, director of BGSU’s School of Art, will speak about Marina City on the episode, which airs at 8 p.m. April 5 on WBGSU-TV and WGTE-TV. Ray is the co-author of “Marina City: Bertrand Goldberg’s Urban Vision,” written with Igor Marjanović of Washington University in St. Louis and published in 2010 by Princeton Architectural Press.

“Marina City is probably the most important modern-day building in Chicago,” Ray said “When it was built, in the early 1960s, it was cutting edge in every way.”

Ray, an architect by profession, lived in Marina City from 1996-99 when, after years of decline, the rounded, “corn cob” towers that have defined the Chicago skyline had not been returned to their full potential but were being rediscovered by architects and others who appreciated their special qualities and their place in American architectural history. She met Goldberg briefly in 1996 when she was director of the School of Architecture at the University of Illinois at Chicago.

She and Marjanović were among the first to mine the rich archive of materials on Goldberg (1913-97) carefully assembled and archived by his son, Jeffrey, and donated by the family to the Ryerson and Burnham Libraries at the Art Institute of Chicago and its Department of Architecture and Design. They also studied the archive of labor and trade union materials at Wayne State University to learn more about Goldberg’s groundbreaking partnerships with the powerful Building Service Employees International Union, the first Mayor Daley of Chicago, and even in Washington, where he managed to get laws changed to allow investors to get mortgage insurance.

“There was a huge amount of political will behind the building,” Ray said.

“Marina City” helped bring attention to Goldberg’s remarkable achievements not only in architecture but also “as a model for downtown mixed-use developments. There’s been a huge resurgence of interest in that in the last 10-15 years,” Ray said.

Goldberg’s overarching goal was to stop the post-war “white flight” to the suburbs that threatened the city’s downtown, Ray said. His genius lay in part in his ability to work with others to achieve his goals.

Shunning both the Classical style of architecture taught in most architecture schools and the new, glass and steel box style of his contemporary Mies van der Rohe, Goldberg brought a humanist vision of social justice to creating a rich life for the ordinary citizen. A marvel of efficient engineering and design, his towers along Lake Michigan featured 20 stories of indoor parking for residents, boat ramps, an ice skating rink, energy-efficient, wedge-shaped apartments with floor-to-ceiling windows and expansive views, all-electric appliances, high-speed elevators and more — all at a reasonable rent.

Ray, who is from the Czech Republic and studied architecture in the U.K., and Marjanović, from Serbia and who studied in Chicago, were amazed to find upon coming to the United States that Goldberg’s legacy had been largely overlooked here despite his enormous contributions — a situation that Marina City’s recent landmark status and now the PBS show, along with their book, will begin to put to rights.