Book is first in U.S. on Chicago landmark 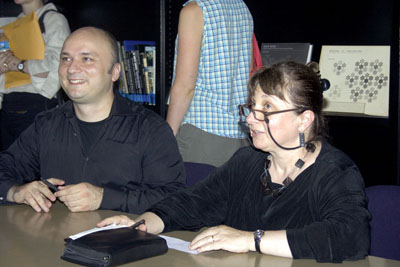 BOWLING GREEN, O.—They’re Chicago landmarks, their signature round towers highly visible from the waterfront and shown in innumerable films, advertisements and billboards around the world. Yet Marina City has been strangely overlooked by architecture writers. A new book by Igor Marjanović of Washington University in St. Louis and Dr. Katerina Rüedi Ray, director of the Bowling Green State University School of Art, sets the iconic complex in its context, architecturally, historically and socially.

“Bertrand Goldberg had a strong commitment to improving society and was a thorough blend of idealism and pragmatism,” Ray said. “He was a great model for architectural practice and for creating beautiful buildings that contribute to the life of a city. Marina Center is also an example of how the fate of buildings is subject to larger forces beyond anyone’s control.”

At a time, in the late 1950s, when Chicagoans were fleeing the city and federal mortgage insurance was aimed largely at suburban development, Goldberg devised his plan for a unique complex of apartments, offices, commercial businesses, recreation and public spaces. This required convincing the city to rezone the area for mixed-use structures, which then had an encouraging effect on the neighborhood. To enable funding for the project, Goldberg went to Washington, D.C., to persuade the Federal Housing Authority to allow federal mortgage insurance for investors.

He partnered with the leader of the powerful Building Service Employees International Union, who invested union pension funds; with real estate developer Chuck Swibel (future leader of the Chicago Housing Authority), and the first Mayor Daley to get the project off the ground.

When the 60-story buildings rose, they embodied a number of “firsts”: built on the first piece of land to have legal status in Chicago, they were the largest real estate deal in the Midwest and the tallest housing structure and largest concrete structure in the U.S. They were also the first all-electric housing structure: General Electric provided all the appliances for the apartments.

An architect’s delight, Marina City’s ingenious curvilinear design enabled the foundation to be much lighter than usual, saving considerably on materials and construction costs. “It is very efficient structurally,” said Ray, who lived in the building for three years. The glass fronts of the small, wedge-shaped apartments provide sight lines out to the lake while deflecting Chicago’s notorious winds. With large balconies and individual boat ramps, its middle-class residents could enjoy a quality of life usually reserved for the better off, and today Marina City is the home of many architects, Ray noted.

However, even visionary developments are subject to the fortunes of the day, and as its champions fell out of power, Marina City eventually was sold and then became a virtual “ward of the court,” said Ray, during the savings and loan crisis of the 1980s, until its revival in the late 1990s.

She and Marjanović have unearthed a trove of information about the remarkable project, finally giving it its due.