The Super Bowl will celebrate a half century of existence Sunday, Feb. 7, with Super Bowl 50, which will again be so much more than just another football game. It has become a spectacle, one of the most watched annual sporting events in the world, and one where former Falcons have been involved from its inception through last year’s championship.

When the first Super Bowl was played following the 1966 season, Bowling Green State University Athletic Hall of Famer Bob Schnelker ’50 was there as a coach with the Green Bay Packers, and he helped his team win the first two installments of the mega championship affair.

Schnelker, who was an All-Ohio end on the 1948 and 1949 BGSU football teams, played 10 seasons in the National Football League, made the all-NFL team in 1958 and 1959, and won an NFL championship in 1956 playing for the New York Giants before moving into coaching and being part of those first two Super Bowl titles with Green Bay. 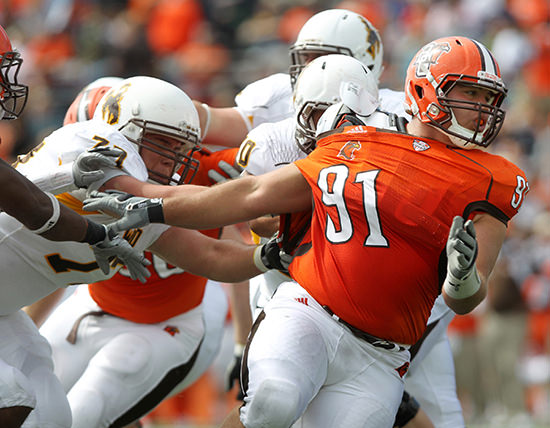 Chris Jones '12Chris Jones ’12, who was an All-American defensive tackle on the 2012 Bowling Green team, played on the defensive line and on special teams for the New England Patriots, last year’s Super Bowl champions.

Several other former Falcons have been part of Super Bowl championship teams during the five decades the game has been around, but Schnelker recalled that, at its start, the Super Bowl had not yet earned its superlative title.

“Those first few years, it was nothing more than the championship game with a different name. The stands weren’t even full back then,” he said. “But it certainly has come a long way over the past 50 years. It has turned into something unbelievable, and for every player and coach, that is the ultimate game to be a part of.”

“Growing up, every kid that played football wanted to play in the Super Bowl someday. That was where you wanted your career to take you —to the Super Bowl,” Jones said. “I expected it to be a big deal, but it was nowhere in the ballpark of what I thought it would be. It was so much more. I felt so fortunate to be playing in the Super Bowl in just my second season in the NFL.”

Jones, whose New England team beat Seattle to win last year’s Super Bowl, said the two weeks of hype in advance of the game made it very difficult to focus on the task at hand.

“There was a football game that we were getting prepared for, but the frenzy surrounding the Super Bowl is something you can’t even imagine, even after you experience it,” he said.

“It was crazy, with all of the media attention, the distractions of everyone calling and texting you, and just the huge buzz the game creates. As a player you want to concentrate everything you have on the mental preparation, but the emotion surrounding the Super Bowl makes that tough to do.” 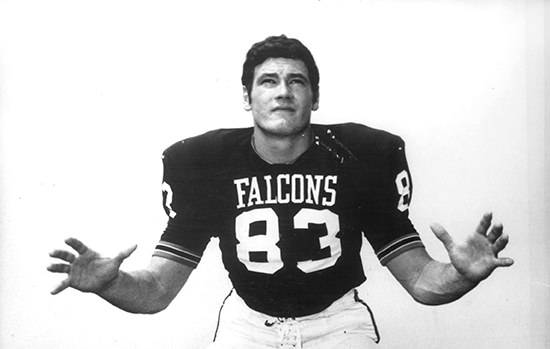 “We went through that whole season with a chip on our shoulder, because we thought we were better than what people gave us credit for, and the Super Bowl was the ultimate proving ground,” said Villapiano, who was a two-time all-conference defensive end for the Falcons in 1969 and 1970, but played linebacker in the NFL.

“When the game came around, we knew we were finally there, and we were ready to rock. Everything was set, and our coach John Madden told us in his pre-game speech that this would be the single biggest event in our lives, as long as we won the Super Bowl.”

The Raiders prevailed 32-14 over the Minnesota Vikings, and Villapiano said his life changed when Super Bowl XI went into the history books.

“I was a fan of the Super Bowl long before I got to play in it and Super Bowl Sunday was like a national holiday. Everyone cared about the Super Bowl,” said Williams, who was a standout defensive back and kick-blocking specialist for the Falcons before playing six seasons with the Cowboys.

“The value of being a Super Bowl champion has increased over the years, because the NFL is so unpredictable, and it is so difficult just to get that far in the playoffs,” Williams said. “I got there in my rookie season, so it was surreal. I couldn’t believe it was a possibility, and then to be part of it and win a Super Bowl—it was crazy. Of course it was real but it sometimes it still seems like a dream, a dream that I am still living.”

Diyral Briggs, a two-time all-conference defensive lineman for the Falcons, played on special teams for the Green Bay Packers in their 2011 Super Bowl win. Briggs was with his third team that season before settling into his role with the Packers.

“At the time, I'm thinking, ‘I made it. I finally reached one of my goals,'” Briggs said about the euphoria that follows a Super Bowl victory.

Former Falcon Mike Obrovac was a backup offensive lineman for the Cincinnati Bengals in their Super Bowl loss to Pittsburgh that completed the 1981 NFL season. Doug Smith, who would go on to make six Pro Bowl appearances as an offensive lineman for the Los Angeles Rams, was injured and recovering from knee surgery when the Rams lost the 1980 Super Bowl to the Steelers.

Schnelker, now 87 years old, has seen all 49 previous Super Bowls unfold and watched the game evolve into an international event. He still wears his Super Bowl championship rings on occasion, and cherishes the role he played in those first two installments of this iconic American sports spectacle.

“It has become something we never would have dreamed of way back then, in that first Super Bowl,” he said. “People just clamor about the Super Bowl now and everybody wants to be a part of it. That was a big word when they came up with the name—Super Bowl, but I guess it kind of fits. It’s super in a lot of ways.”