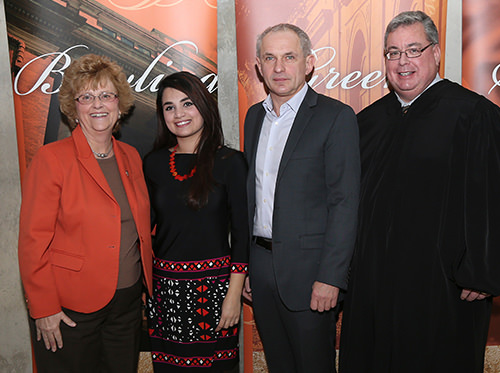 Halel, a senior majoring in graphic design, is from Gaza City, Palestine. Tarnovsky, an associate professor of photochemical sciences, is from St. Petersburg, Russia. They were among the nearly 50 people from 23 countries who took the citizenship oath at a naturalization ceremony hosted by BGSU Nov. 14. Leading the proceedings was Magistrate James Knepp, a 1987 BGSU graduate in mass communication.

“I never thought I’d end up here,” marveled Halel. “Since I was born, I was a refugee in my own country.” Her maternal grandparents fled from Jerusalem to Gaza during the 1948 war, where they lived in a refugee camp built by the United Nations.

“The Israeli/Palestinian situation is a complicated issue and I don’t know if it will ever end,” Halel said. She remembers long waits at Israeli checkpoints in Gaza as a part of everyday life growing up, and not being able to visit the side of the family remaining in Israel.

“As an American citizen I actually have more freedom to travel anywhere, unlike when I was living in Gaza and I could not leave,” she said.

Tarnovsky has not experienced travel restrictions, but instead did not settle anyplace for long. Beginning in 1994, he lived the itinerant life of an academic, living at various times in the U.S., Russia, Sweden and Switzerland. He first came to the U.S. in 1994 for a year as a post-doctoral researcher at Columbia University, followed by two years back home in St. Petersburg, then on to Sweden for seven years and Switzerland for three, back to Sweden, and finally to BGSU, where he was hired by Ohio Eminent Scholar in Photochemical Sciences Dr. Michael Rodgers, Dr. Douglas Neckers and Dr. Michael Ogawa, who was then the chair of the chemistry department (now vice president for research and economic development and dean of the Graduate College).

While in New York, Tarnovsky became close and enduring friends with an older couple from New Jersey, Jorge and Mary Berkowitz. “They showed me the country, which I came to love,” he said. “Becoming a citizen is a spinoff of that love.”

Studying for the 100-question citizenship test was “useful,” Tarnovsky said. “The political system is complicated, and it helped me understand the separation of powers, the Executive Branch and the others, and how elections are organized. I enjoyed the examination,” which took place in Cleveland.

The life he has built here includes his love of opera and classical music, and he has been active with the Toledo Opera. An avid sportsman and traveler, he and his spouse, Iryna Burch, live in Perrysburg.

Unlike Tarnovsky, Halel has most of her immediate family here. Her younger sisters, Raghad and Ghadeer, became citizens several years ago as minors along with their mother. Being over 18, Halel had to do it on her own. Raghad, also a BGSU senior, is a biology major planning to go to medical school, and Ghadeer is a junior majoring in marketing at the University of Akron.

When she came to the U.S., Halel swerved from her lifelong plan to become a lawyer because her English was not strong enough, she said. She enrolled at the University of Toledo in the respiratory therapy program but after two years, realized it was not for her. Although she had always watched one of her younger sisters, who was known as the artist in the family, Halel had never drawn or painted. Trying it, “Suddenly I realized I’m good at art,” she said. “This was shocking to everybody. Nobody knew I had this talent — not even me.”

She enrolled in the graphic design program at BGSU and “for the first time, I really love what I do,” she said. “I found the right program for me. BGSU is a strong institution and I love my faculty members, especially Lori Young (chair of the graphic design division in the School of Art). She’s also my adviser.”

Now that’s she’s nearing graduation, she is experiencing the usual conflicting emotions that go along with approaching change. “I’m excited but I’m also a bit worried,” she said. “I’m ready to move on and I hope to find an internship or job to get more experience and build up my career.”

She has not completely abandoned her dream of studying law, she said. “I’ve been fascinated by it since I was little and I was always educating myself by reading newspapers. I was interested in seeing what was happening around the world. It was assumed in my family that being a lawyer would be my career. That was what I would do.”

With her degree and her citizenship in hand, Halel may yet open a new chapter in her so-far surprising life.