BOWLING GREEN, O.—Most histories of photography claim that the medium was invented in 1839. In its relatively short existence since then, photography has spurred perhaps a disproportionate amount of debate compared with other art forms, notably over whether it should even be considered an art form at all, and going on from there. 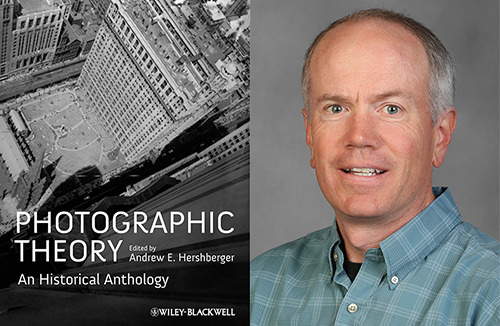 Much has been written, and as photographic techniques have evolved, so too has the conversation.

Dr. Andrew Hershberger, art history, has brought some clarity to the development of thinking around photography with “Photographic Theory: An Historical Anthology,” published this year by Wiley-Blackwell. Hershberger captures both the “art history” aspects of photography and the drama surrounding the numerous other theoretical debates it engenders.

His efforts have been appreciated: The Society for Photographic Education (SPE) has named him the winner of its 2015 Insight Award, for “significant contribution to the field of photographic education” and to the organization. He will be honored at the annual SPE national conference, to be held in New Orleans next March.

The Insight Award was developed by SPEʼs National Board of Directors to recognize achievements of significant distinction made by individuals to the photographic education field. “Measured from when careers first begin to the time when standing ovations erupt spontaneously in lecture halls, SPEʼs Insight Award symbolizes the realization of a national or international career or the launching of endeavors to new challenges, ideas, and horizons,” according to the society.

Unlike all previous anthologies on the topic, “Photographic Theory” begins long before the modern camera was invented. In fact, it starts thousands of years ago with the potential beginnings of the camera obscura, or “dark room.” Among other early texts, Hershberger includes writings from Plato and Leonardo da Vinci, who have both been linked by photographic scholars to the camera obscura. It is the only book of its kind to include ancient, Renaissance, and 19th-21st century writings related to the subject of seeing, photography and art.

It has been well received in the press. Reviewer Jan Baetens, writing in Leonardo Online, called Hershberger’s book a “timely and stimulating historical anthology” and a “welcome update and broadening of older collections,” praising Hershberger’s awareness of the conflicting views and theories regarding photography that have arisen over the years as reflected in his discerning choice of writings.

A BGSU faculty member since 2001, Hershberger specializes in contemporary art and the history of photography. He is adapting his dissertation on American photographer Minor White (1908-76) for publication as a book and has published numerous articles in peer-reviewed journals. His work has been funded by grants and fellowships, including a 2009 Visiting Fellowship at Oxford University, a co-authored 2009 grant from the National Endowment for the Humanities, the inaugural Teti Fellowship at the New Hampshire Institute of Art in 2008, the 2007 Coleman Dowell Fellowship at New York University, and a 2004 Ansel Adams Research Fellowship at the Center for Creative Photography, University of Arizona.