One of the first assignments in Beth Macy’s introduction to magazine writing class at BGSU was to write a personal essay and then pitch the story to magazines. Macy says the instructor, Vickie Hesterman, told the class that any student who got published would receive an automatic A in the class.

“My dad had just died, so I wrote about my relationship with him. I sent a query letter to Seventeen magazine and they wanted it. So I wrote the piece and Vickie and I went over it line by line,” Macy said. “That was my first published piece in a national magazine.”

It was also an indication of Macy’s future success. The former award-winning reporter for the Roanoke Times is now a New York Times best-selling author. Her book “Factory Man: How One Furniture Maker Battled Offshoring, Stayed Local - and Helped Save an American Town” has been on the best-seller list since its release in July.

College was not a foregone conclusion for Macy. The Urbana, Ohio, native said she was raised by “the village.” Her mother was a factory worker when the economy was good and her father was what she described as “serially unemployed.”

“My mom was tired and my dad was absent. I was the youngest of four kids and had a lot of time to get into trouble. A lot of people watched out for me,” she said. When Macy did arrive at BGSU—the first in her family to go college— it was thanks to the Pell Grant, work-study opportunities and her own determination.

She got her degree in journalism, tapping into her love of writing, and credits Dr. Ray Laakaniemi with teaching her how to do an interview.

“Ray was great and the big lesson I learned was to talk to regular people. You can look at this book and say it’s about globalization, but it’s more about the workers and regular people. I do not let CEOs push me around and I won’t let them decide the story. I think that’s the strength of the book and I learned that from him.”

After stints in Columbus, Ohio, and Savannah, Ga., Macy found herself in Roanoke, Va., and it’s where she stayed, working at the newspaper, writing award-winning feature series and raising a family. It’s a scenario she said doesn’t happen too often in journalism today.

“The hard thing is that people leave and go to bigger markets. I didn’t do that; I stayed and had my family. But, the great thing is, these books are only possible because I know these communities and can do in-depth work. People from bigger markets could not do this. They would not find them. That’s what’s missing from journalism—reporters not having time to get outside their beat and learn about their communities. I saw a little hole in the defense and exploited that because no one else had reported this great story.”

Macy said she’s often asked by journalism students how to write her “kind” of stories. While she tells them to broaden their skill set for today’s multimedia world, she also preaches the basics—to get off social media and start talking to people.

“They should still understand that their job is to go out and find out what is happening in their community, not just what’s happening on Twitter and Facebook. You have to make the effort to get out of your ZIP code. You know you’ve arrived when you walk into a diner and you know everyone there and by the time you leave, three people have given you story ideas.” 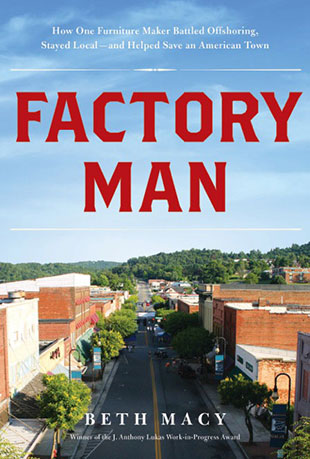 It’s those connections that led Macy to John Bassett III, the focus of “Factory Man,” and the owner of the Bassett Furniture Company, once the world’s biggest wood furniture manufacturer.

Macy learned about Bassett from her neighbor, a furniture storeowner, while working with a photographer-friend on a series about the furniture factory closings in rural Virginia. In 2003, Bassett filed the largest-ever lawsuit against Chinese furniture manufacturers for dumping, which is exporting a good to a foreign country to capitalize on the price. He won, ultimately saving his company.

“The first day I was in the factory and I met John Bassett I learned he’s great interview—fascinating, annoying and totally himself, which is rare in a CEO these days.

“What he had done was really fascinating. It was bold and allowed him to give China the middle finger—in a way only he could do it. He was a great character to write about, almost Wagnerian. He’s a multimillionaire at birth, he doesn’t have to work and he does this. Why did he do this? That’s what I set out to answer.”

It didn’t take long for Macy to realize that Bassett’s story was more than just a great profile. “You could tell his story and the history of how this industry was built as well as this contemporary story of great social relevance when everything went offshore. You could tell this recent economic history all through this one character.”

Macy took a yearlong leave of absence from the newspaper and got to work on “Factory Man.” Before she handed it in to her publisher, Macy learned she had won the 2013 J. Anthony Lukas Work-in-Progress Award administered by Columbia and Harvard universities, which brought with it prestige and a $30,000 prize.

After that, Macy said, her publisher took her a bit more seriously, and with good reason. “Factory Man” was released to critical acclaim and Macy hit the media circuit, doing dozens of TV and radio interviews and readings promoting the book. 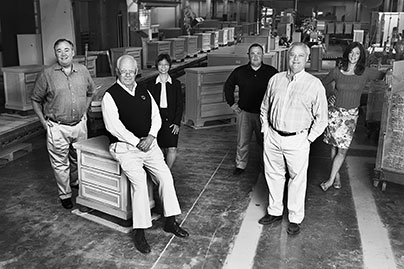 “I didn’t realize how all-consuming promoting ‘Factory Man’ would be when it came out. The first interview I gave was ‘Fresh Air’ and I was scared to death. I could hardly sleep the night before. I didn’t want to screw that up. The day the book came out I had 17 interviews with radio stations across the country. Some were taped, a lot were live, but by the end I was so comfortable about talking about the book.”

Macy will also get the unique opportunity to see her book translated to screen. It was recently announced that Playtone, the production company of Academy Award-winning actor Tom Hanks, will produce a miniseries for HBO based on the book.

In between promoting “Factory Man,” Macy is working on her second book, about a former sharecropping community outside of Roanoke called Truevine.

“It’s a book about race and greed and what passed for entertainment out of the Civil War. It begins with a crime in 1899. Two black boys are kidnapped and sold into the circus. It’s about their mother’s efforts to get them back. It’s a true story and it took 20 years for the people in this community to trust me enough to share this story with me.”

It’s that trust and sense of community that make up the secret to Macy’s success.

“You have to go out and talk to real people. It’s the heart of it all, and if you don’t have those connections, you don’t have crap for what you’re going to turn out.”